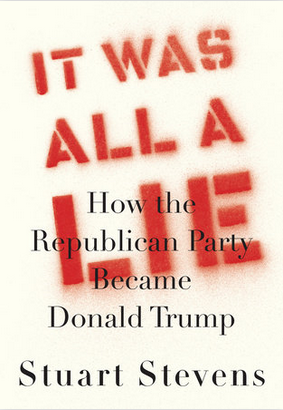 It’s hard to characterize what exactly Stuart Stevens is doing in this, his eighth book, It Was All a Lie: How the Republican Party Became Donald Trump. Part confessional, part apologia, heavy on indictment and mea culpa: He’s getting a lot off his chest here.

It’s also difficult to discern his target audience. A significant chunk of readers will spend their time yelling at the book, “You’re finally admitting it? I’ve been saying this for years, and you kept shouting me down!”

Perhaps, though, that same group will experience enough of a tingly sense of Schadenfreude to make the book a one-sitting page-turner — even if this contingent has no real need to hear the argument Stevens is making.

And since a solid percentage of the American electorate, like their hero in the White House, shows no evidence of ever having read a book, it’s a good bet the author has dismissed that cohort as unreachable.

Thus, one presumes he’s attempting to hold a mirror up to those who cling to the notion, against all evidence, that there is still a core of principle hiding somewhere under the rot of corruption, mendacity, and craven complicity of today’s Republican Party.

(Who exactly is that? Maybe Alaska senator Lisa Murkowski, who continues to “wrestle” with her support for the president?)

Stevens is a veteran GOP strategist whose first taste of campaigning came when he was recruited out of UCLA film school by a hometown candidate who needed someone to work for him cheap. Since then, Stevens has achieved “the best win-loss record of anyone in my business,” and has worked on five presidential campaigns. Four of those candidates won the party’s nomination, and two went on to win the presidency.

He is also currently one of the Republicans who form the Lincoln Project, the cohort of Never Trumpers — or, if late to the party, the “Okay, I Finally Admit This Was a Really Bad Idea” people — who’ve committed themselves not only to defeating the president, but also to sweeping out his weak-kneed congressional enablers.

Stevens doesn’t buy the argument that the current president is an anomaly who does not represent the “real” Republican Party. The triumph of Trump has merely forced him to admit the truth of what the GOP has become over the last 50 or 60 years: a party without principles — or with ones they’ll jettison in a heartbeat if it means winning a race or avoiding a primary challenge. (See Exhibit A, Lindsey Graham.)

The author brings much evidence to bear in support of his thesis, and the book is at its best when it goes inside baseball to dissect how things went so sour. He walks us through such hot-button topics as the party’s perpetual racism, its cloak of religiosity (and the odd coupling of evangelicals with a thrice-married, irreligious sexual braggart who puts children in cages), the fiction of Republican fiscal restraint, and the repudiation of science.

For example, it’s instructive to remember that, prior to 1964, neither party was especially supportive of African Americans, and Republican presidential candidates often won 30 to 40 percent of the Black vote. That is, until Barry Goldwater campaigned for president against civil rights. Then, once Southern Democrats began abandoning their party over the Civil Rights and Voting Rights acts, Republicans went all-in on becoming the party of white grievance, with predicable results:

“Since 1964, no Republican presidential candidate has broken 17 percent with African American voters, and by 2016 only 3 percent considered themselves Republican.”

Stevens describes earnestly attempting to find the hook that would make the GOP appealing to Black voters without ever examining the inherently racist policies and attitudes baked into the Republican Party cake.

Perhaps most damning and frightening is the chapter called “Machinery of Deception,” which discusses right-wing media, whose goal is to ensure that Americans no longer live in a shared reality of basic facts. He points out “just how huge the machinery of deception is that the Republicans have erected and how long it has been in the making…For decades a certain percentage of those who call themselves conservatives have been cultivating a country within a country, a sort of virtual secession from the United States of America.”

In many ways, it is both hard to take and somehow uplifting to receive these long-delayed insights from one who worked to put them in place to begin with, or at the very least, to propagate them. Certainly, with this book, Stevens is proclaiming that he has learned his lesson:

“It is a strange, melancholy feeling to turn sixty-five and realize that what you have spent a good portion of your life working for and toward was not only meritless but also destructive.”

The question for those of us who have watched with horror the disintegration of any sense of shame or evidence of humanity within the Republican Party is whether the folks behind the Lincoln Project, Republican Voters Against Trump, or any of these newly righteous groups can be trusted beyond the 2020 election.

Yes, they have turned the sharp knives of their media machine against many they helped elect in the first place. But if America is successful in defeating this scourge on November 3rd, what then? Will Stevens, Rick Wilson, Steve Schmidt, and the others revert to standing on the sidelines and throwing rocks at a Democratic administration (and, as crucially, a Democratic Senate), or will they commit to working in good faith with newly elected leaders toward something that resembles rational governance?

Presuming that a free and fair U.S. election is not subverted by President Trump and his minions, determined to hold onto power through whatever means possible, we may have the opportunity to find out.

Lighting the World: Transforming Our Energy Future by Bringing Electricity to Everyone

A former leader of the U.S. electric industry proposes powering the homes of more than 1 billion people with solar.