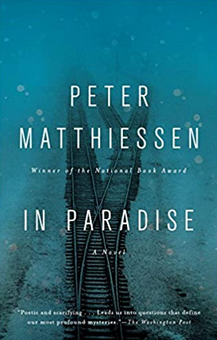 In the first pages of Peter Matthiessen’s In Paradise, a young Polish couple drives D. Clements Olin — a 55-year-old professor of Slavic literature who has missed his train — to the black iron gates of Auschwitz. Olin is a Polish-born American, having spent only the first months of his life in Oswiecim, while the teenagers are native Poles. Still, they are ignorant of the murder of Polish Jews during and after the war; in fact, they claim never to have met a single Jew before.

“But of course you know your own history much better than some foreigner who has never been here,” suggests Olin, aghast. That question echoes throughout the rest of this haunting and carefully wrought novel — the last in Matthiessen’s illustrious career, which spanned six decades and 30 books. Who, asks Matthiessen, knows more of a history — those who lived through it or those who stand apart, looking back?

On the surface, Olin’s mission is clear: He has come to Auschwitz to conduct research for a book on Tadeusz Borowski, a Polish writer who survived the camp before committing suicide at the age of 28. But Olin has a more personal reason, too, for coming: He carries a battered photograph of the mother he never knew and whose fate he hopes to unearth.

Olin joins a meditation retreat whose 140 pilgrims have come from 12 countries to bear witness to the camp’s atrocities. Many lost relatives to the Holocaust, but others, like the quickly ostracized Germans, have come to grapple with the fatal role their loved ones played in those horrors. The intellectuals hope to understand the “evolutionary purpose” of human evil and the long demonization of the Jewish people. Others, like the provocative G. Earwig, as hostile as he is evasive, fiercely guard the secrets that have brought them to the retreat. They are joined by a Zen Buddhist leader and a small contingent of rabbis, priests, and nuns.

In this bubbling, acidic medley of personalities and pasts, conflict arises quickly. The retreat members vacillate between shame and accusation, vulnerability and self-protection, grief and strange, guilt-ridden joy. Almost all question the utility of the retreat, for themselves and for others. “What could his research possibly contribute that has not, long since, with lacerating eloquence, been flayed upon the page?” asks Olin, and doubtless Matthiessen, too. “Surely the time, means and goodwill of these would-be ‘witness bearers’ might be better spent out in the world, helping the hordes of refugees and other sufferers…We must help the living while we can, since the dead have no more need of us.”

Or do they? Throughout the retreat, Olin is haunted by the ghosts of those who died here — the “deep presence holding Birkenau together, causing its visitors not to flee in horror but to return down that long road over and over.” When the desire for private experiences of grief chafes against the vulnerability and intensity of the retreat’s communality, tempers flare, and no one is left unimplicated. They wonder who among them could have survived the death camps, and at what cost, “threatened by the widespread suspicion that survival in a death camp’s desperate conditions without betrayal of one’s own humanity was impossible for all but a very few.” They bicker about the culpability of their respective home countries. They turn on the Germans, the Catholics, and the one Palestinian, questioning their right to take part in this retreat.

While the dialogue in these debates is brilliantly rendered and the ideas engaging, they can take on a disembodied, academic air; there are many voices, but few belong to fully fleshed-out characters. Conversations are ruminative and occasionally repetitive, and the theme of bearing witness is combed through more frequently than feels necessary. But these moments are outweighed by Matthiessen’s insight and meticulous prose. The novel’s lyricism illuminates its horrors without prettifying or overwhelming them; at one point, Olin recalls SS photographs of “the knapsacked children whose yellow stars, deathly white in those old prints, loom so large on the dark suits of those little boys wearing neckties and knickers, the better to make a favorable impression at their destination.”

Goodness appears unexpectedly. Olin’s slow-blooming near-romance with a Catholic nun brings the same joyful confusion that is experienced at the novel’s climax, a moment of “unholy” rapture in which the participants join hands and dance. The dancing, thereafter referred to as “It,” is condemned by some, but Olin disagrees: “With the advent of this something-not-known (which he scarcely dares consider lest it vanish), the metastasizing animosities among the witness bearers are dissolving, as if the Dancing has sealed their acceptance of all woebegone humankind in all its greed and cruelties as the only creature capable of evil and the only one — surely these two are connected — aware that it must die.”

Although In Paradise considers humanity’s capacity for both incomprehensible cruelty and joyful resilience, neither is framed as the retreat’s easy takeaway. As he recalls the ignorance of the teenagers who brought him to Auschwitz and it becomes clear that anti-Semitism is still deeply engrained in Poland, Olin wonders if the Shoah “has already lost its power as a cautionary lesson.” If the act of forgetting is the greatest threat — and the greatest betrayal — then remembrance is an act of courageous resistance. To stand witness, Olin learns, is to be forced to acknowledge the horror in oneself as much as the horror outside it. At one point, a rabbi tells the witness-bearers that “of all sounds, the shofar is the loneliest. It is the voice of the living calling out prayer across the void to the nameless, numberless dead who do not answer.”

In Paradise, a shofar in itself, keeps calling.

Chloe Benjamin’s first novel, The Anatomy of Dreams, is forthcoming from Atria/Simon & Schuster in September 2014. She tweets at @chloekbenjamin.