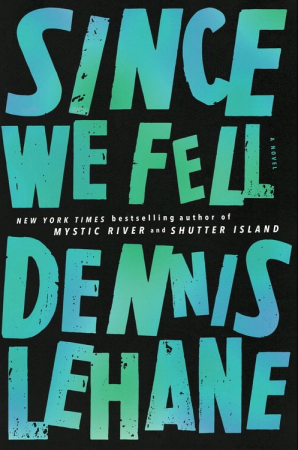 Dennis Lehane’s new novel, Since We Fell, tells the story of a capable but troubled newswoman sinking slowly into social and psychological paralysis. Through two-thirds of the book, we follow heroine Rachel Childs as she grows from girlhood into a successful adult career, only to see her professional success slip away for reasons only partially her fault.

As we observe Rachel’s downward drift during this long first “movement” of the novel, Since We Fell becomes a rich and empathetic, though somewhat dispiriting, read, but it’s still well suited for leisurely summer consumption.

Then Lehane stomps on the gas pedal, and we’re suddenly enmeshed in a headlong woman-on-the-run thriller, another, more frantic species of summer read. Rachel — by this point an agoraphobic whose second marriage seems to be dissolving before her eyes — finds herself in a deadly faceoff with a pair of real-life thugs and is forced to recover her fleeting resourcefulness if she’s to survive the chase that ensues.

Given the depth of her descent, Rachel’s comeback may seem a bridge too far, but Lehane pulls it off with craftsman-like skill. Rachel’s minute-by-minute getaway plays out as entirely earned, authentic, and exciting. Although the author does occasionally slip a narrative-friendly coincidence into the mix, the last third of the book is chillingly compelling, as much from the dizzying upshift in pacing as from Rachel’s snap-out-of-it recovery during an ordeal-studded overland chase.

Lehane’s skillful blend of character-centered and event-driven motivation shouldn’t surprise readers who know this author. At 50, he’s consistently proven his mastery of the popular-fiction game, beginning with a series of private-eye procedurals featuring partners/lovers Angie Gennaro and Patrick Kenzie. Since 2000, he has moved on to increasingly ambitious works, most of them cast in the crime-novel mold, notably Mystic River, later adapted into a movie nominated for six Oscars, including Best Picture.

Four more Lehane novels and stories have since been adapted for the big screen, and he’s written scripts for HBO’s “The Wire.” In Since We Fell, we hear the cadences of the gritty demi-monde where Lehane’s people so often dwell: in the voices of a canny Boston detective, barroom pickup artists, a grimly matter-of-fact hitman, and the many characters whom Rachel is forced to deceive on her run to freedom.

It’s in this headlong escape that she finds her way to a unique variant on the normalcy that has eluded her for 30 years. An only child, her young life begins to drift under the imprint of her single mother’s neurotic relationships with men and her nasty, insistent silence (carried to the grave) concerning the identity of Rachel’s father.

All this triggers Rachel’s compulsive search for the man who fathered her, even as she achieves rapid success as a journalist and TV-news personality in a superficially stable marriage. But then comes the first reversal in a novel replete with them.

On assignment covering a horrific Haitian disaster, Rachel is overmastered by her inner demons. Drunk and experiencing a full-on panic attack, she humiliates herself on-air, loses both her job and her husband, and collapses into a downward trajectory of compulsive self-isolation.

But, soon, a new romantic-redeemer cruises onto the scene — undoubtedly to the hopeful relief of a significant segment of Lehane’s intended readership — in the person of an old acquaintance who understands Rachel and her emotional needs. They marry.

For two years, buttressed by her ostensibly perfect spouse, Rachel scrambles her way back to the light, although traces of her creeping paranoia linger. One day, she stumbles into a puzzling encounter that triggers her long-forgotten reporter’s instincts. Newly stiff of spine, she sets out to discover the truth about her spouse’s business.

Increasingly convinced of her husband’s duplicity (and crass betrayal), one morning, she follows him as he leaves for an extended overseas trip. Instead of heading for the airport, though, he leads her on a roundabout multi-stop jaunt, then ultimately back to a boat she never knew they owned. There she confronts him and, in an instant of angry confusion, commits an act that calls down the furies who so cruelly and predictably drive thrillers.

It’s in this moment that Lehane’s narrative, previously steeped in Rachel’s introspection, breaks like a greyhound from the gate. Rachel becomes a woman pursued — that staple of the genre — and for the rest of the novel, she’s on the run from police and hired corporate killers alike. Day-by-day in her frantic arc of escapes and countermoves, she uncovers the truth behind her marriage, even as she’s backed into a hyper-violent climax and, in another spurt of irony, her ultimate unburdening.

Perhaps it’s too glib to call attention to the bones of this narrative, to its recruitment of conventional features from two established bestseller models, as well as from familiar investigative-mystery, romance-novel, and “caper” plots.

Lehane is a virtuoso of popular narrative and he certainly gives us one here. But it’s difficult to dodge the sense that he’s stitching proven blockbuster ingredients together with sales rather than artistic success in his sights. Read Since We Fell, and then decide for yourself.