I Was the President’s Mistress!!

This antic Filipino picaresque pays off big for patient readers. 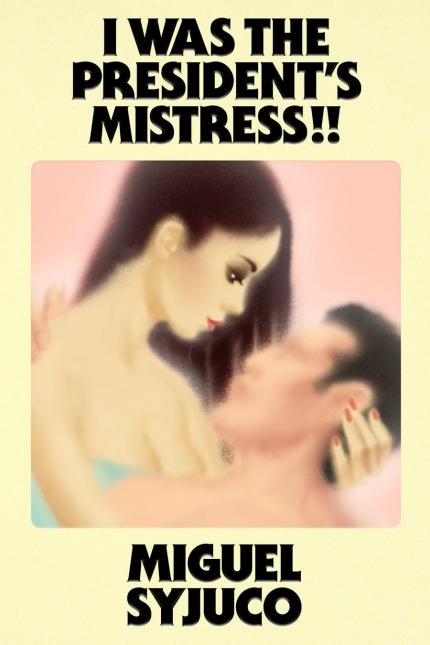 Miguel Syjuco, the author of I Was the President’s Mistress!!, and Miguel Syjuco, the character in the novel, may be one and the same person. Or maybe not. In any event, they each appear to be having a rollicking good time, especially the latter, who ends up in bed with the “I” of the book’s title, Vita Nova.

Never mind that there’s no consummation during that particular bedding; there’s plenty of it between Vita and a passel of other characters, all of whom are, in the novel’s conceit, being interviewed by Syjuco in preparation for him writing Vita’s life story. The unexpurgated transcripts of those interviews, interspersed with interviews with Vita herself, are the ingenious vehicles through which the plot of the book emerges.

It’s political satire by way of picaresque, and like any good picaresque (such as Daniel Defoe’s Moll Flanders, whose titular heroine is a worthy literary progenitrix for Vita), it involves a protagonist of low birth (her Filipina mother foolishly believed the promise of Vita’s American father to take her “Home to Independence” [Missouri]) and often low morals (many of Vita’s monologues include the dirty particulars — very much TMI — of her various assignations) who, through luck and pluck, outwits her enemies and trounces whatever tribulations the world throws her way.

The president in the novel’s title, the least impressive of Vita’s lovers and the vilest of her antagonists, is Fernando Estregan, head of state of the Philippines, Asia’s oldest democracy. But as she says at the end of the book — when she’s improbably but perfectly running in a national election to succeed him — Vita is “much more than the president’s mistress.”

Indeed, she is many things: a dancer and pop singer (her big hit is “Mr. Sexy-Sexy”), a movie and television star, a sex goddess, and an all-around celebrity famous, like dozens of clueless and empty-headed young stars today, for being famous.

The wonder of Vita, though, is that she’s not clueless and empty-headed. However much she may talk in a ditzy, social-media pidgin (“Amazeballs. The campaign’s going super good. Top of the polls! Me and Nur, only two weeks from victory day. Don’t I look fetch in fuchsia?”), she has a soul and an astute and penetrating mind.

She fancies herself — properly so — almost a feminist and almost an intellectual, and her monologues are peppered with references to everything from Virginia Woolf’s A Room of One’s Own to Anne Newport Royall, the first professional newspaperwoman in America, who, while John Quincy Adams was swimming nude in the Potomac, sat on his clothes in order to force him to give her an interview. Shakespeare gets a nod, too. While being seduced by a tall, dark, and handsome American naval officer, Vita recalls, “I was like, Lead on, McBuff.”

There is wordplay galore in this book, from Vita and others. Puns are, she says, “the beating heart of Filipino humor,” and I Was the President’s Mistress!! must average at least one per page.

Syjuco the author is a ventriloquist of pitch-perfection. Each of Vita’s lovers (including a Catholic bishop, a jaded newspaperman, and a high school sweetheart) has his own distinct voice and distinct personality revealed through that voice. Memorably, Juan Miguel “One-Mig” Sontua, Vita’s onetime onscreen partner in a “teen love-team,” who has since gone nuts, engages in a manic, pages-long run-on sentence explaining the various conspiracies of the world, at the center of which, he intimates, sits Vita herself. Remarkably, he makes a lot of sense.

But it’s not just language that Syjuco nails, it’s his characters’ inner thoughts, too. When Vita and new boyfriend LeTrel, a Black American, visit a casino to play roulette, she yells, “Always bet on black!” (She’s exuberant over the scandal she’s caused in the Philippines by dating a Black man.) But LeTrel, in a later recollection, objects: “Just cuz she heard Will Smith say that in a movie doesn’t give her permission…Know what I’m saying? Made me feel like a game being played.” Not every author would be perceptive enough to craft such a subtle but poignant complaint.

The end of the story is ambiguous. In fact, the book’s last 10 pages — but for page numbers and title headers — are empty. That’s intentional, Syjuco says in an afterword, because its “climax must now be written by you in its blank final pages.”

Syjuco’s debut novel, Ilustrado, winner of the Man Asian Literary Prize, reads very much like a first effort from a precocious author almost too smart and talented for his own good. And there’s some of that here, too. But for the reader willing to put in the work, I Was the President’s Mistress!! will repay the effort with an unexpected, twisty story full of extraordinary writerly technique.

And it offers Vita Nova, too. A magnificent creation.