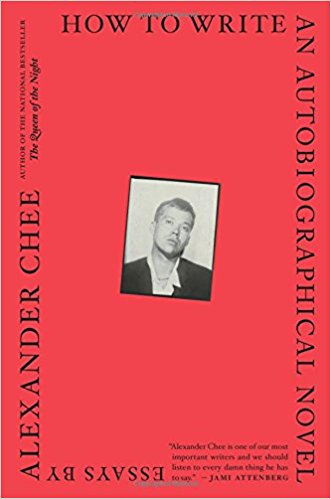 Author Alexander Chee is the king of literary Twitter, or at least, that’s how I knew him. His tweets and retweets are thoughtful, conscious, sometimes beautiful, and always woke. His feed is a mixture of stinging political commentary and uplifting bits of the internet. Chee is also wonderfully generous and shares the writing of authors both famous and those just finding their way around the keyboard.

His new How to Write an Autobiographical Novel is one of those rare books that a reader can open up, flip to a page, and pull out sentences that will leave them astounded. In the essay “Inheritance,” for instance, he writes: “Pain has a story to tell you, but you have to listen to it, as is often the case, I was teaching what I needed to learn.” In the title essay, he instructs that, when starting a novel, “You are like someone left in the woods with an ax, you are the ax. The woods are your life.”

This work calls itself an essay collection. And, yes, each essay stands alone, but they also hum together, ebbing and flowing back and forth through Chee’s life as a writer, a queer man, a Korean American, a teacher, a waiter, a New Yorker, and a child of Maine. As much as anything, this book is a deconstructed memoir or a fragmented autobiography.

Chee expounds on everything from his time in Mexico, the loss of his father, and tarot cards, to money, AIDS, and gardening. Yet even when it doesn’t seem like he’s writing about them, the ideas of identity and what it means to be a writer consistently surface. Chee has this wonderful outsider’s self-awareness. He is a flaneur with a conscience who has a habit of joining the party.

Despite its many subjects, How to Write an Autobiographical Novel is above all a book on writing. As I read, I underlined, highlighted, and snapped photos of quotes. While I sometimes do this with other books, it felt as though I couldn’t pick up Chee’s collection without a pen at the ready. It’s as if it were written for those who know the struggle of writing as the world watches, as well as the struggle of writing when no one else cares.

How to Write an Autobiographical Novel is one of those books that will wait patiently on many writing desks, its pages dog-eared and marked up, its spine cracked and bruised. It’s worthy of a spot among other classics of the craft, including Annie Dillard’s The Writing Life, Stephen King’s On Writing, and Rilke’s Letters to a Young Poet.

While his writing about writing is lyrical, Chee is not an idealist. He knows he’s lucky, he understands the value of stability and health insurance, and he recognizes the inequity that some writers face. He also feels the strain on the creative class (especially those of color) as terrorism, the war in Iraq, and the rise of White Nationalism press down like a branding iron. The question of “What will happen to us?” feels less melodramatic and more real than it once did.

Simply put, How to Write an Autobiographical Novel is a love letter to the wonderfully rebellious choice to live a literary life. With it, Alexander Chee has created something beautiful — even if it’s way longer than 140 characters.