A sweeping look at race — and racing — in America. 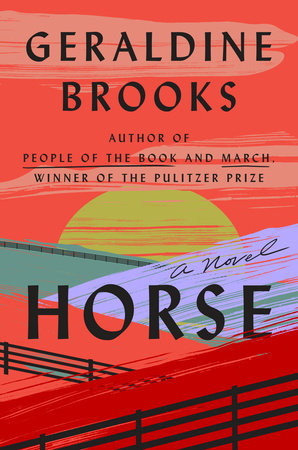 Horse by Geraldine Brooks, winner of the 2006 Pulitzer Prize for March, is a sprawling roman à clef covering nearly 170 years of American history, stretching from antebellum Kentucky to present-day Washington, DC. Thoroughbreds provide the unifying element for this far-reaching narrative, but horses and the complex culture surrounding them are only devices for Brooks to explore her fundamental subject: race and its corrosive influence on our nation’s foundation and cancerous impact on society today.

Told from the perspective of six characters, Horse interweaves the story of the Black equestrians who made their white masters fabulously wealthy with those of contemporary young professionals struggling to form relationships despite racial microaggressions and misunderstandings.

By far, the most compelling narrative is that of Jarret, an enslaved boy in Kentucky, whom Brooks describes as being “slow to master human speech, but he could interpret the horses: their moods, their alliances, their simple wants, their many fears. He came to believe that horses lived with a world of fear, and when you grasped that you had a clear idea how to be with them.”

Jarret understands the fear horses have because he, too, is wholly dependent on the whims of others for food and shelter. And like horses, he can be beaten or sold at any moment. In the antebellum South, horses and their enslaved attendants are commodities. Nothing more.

But the night he helps his father, a free man, with the birth of a white-footed foal, Jarret’s life begins to change. “He makes me feel — hopeful,” Jarret says of the animal. “Like the future gone matter more than it did the day before he come.” Eventually, the foal is named Lexington and goes on to become a legendary racer and an even more legendary sire.

Jarret and the horse develop a profound bond that enables the young man to gain some agency over his own life. As Lexington is sold, then sold again, Jarret is sold along with him, changing from Warfield’s Jarret to Ten Broeck’s Jarret to Alexander’s Jarret. Although he has no last name, Jarret gradually becomes literate, perceptive, disciplined, canny, and empathetic. Once freed, he becomes Jarret Lewis, no one’s man but his own.

Observing Jarret’s transformation from boy to man is Thomas J. Scott, an itinerant artist and writer hired by wealthy patrons to paint their horses. Scott’s narrative is the only one told in the first person — through his diaries — and Brooks does a wonderful job capturing the artist’s obsequious tone and cool detachment toward the moneyed gentry who pay him. Over the course of many years, Scott paints several pictures of Lexington. An early, rough one he gives to young Jarret. Later, Scott gives Jarret another one, although it, too, is imperfect.

Scott’s paintings form the basis for the chapters covering the 1950s and 2019, but Brooks, who so beautifully captures the nuanced and constant sense of threat permeating the Old South, fails to achieve similar tension with her contemporary characters. Martha Jackson, for instance, who buys one of Scott’s paintings from her maid, remains too slight to engross the reader. Yes, she does ultimately bequeath the work to the Smithsonian (an action that impacts later developments in Horse), but a subplot involving her interactions with Jackson Pollock is needlessly distracting.

The more successful modern-day thread involves Jess, a white Australian conservator at the Smithsonian, and Theo, a Black doctoral student in art history. An African American in the sense that his father was American and his mother is Nigerian, Theo is a liminal figure, unencumbered by an ancestry of enslavement, yet impacted by today’s prejudice.

“Meet cute” might describe his initial collision with Jess, but “contrived” may be more accurate. Both ride expensive, blue Trek CrossRip bikes; both have lived in Canberra and know what a Kelpie is. (It’s an Australian sheepdog.) With this much in common, what could go wrong? Apparently, a lot.

Yet despite mixed messages and microaggressions, Jess and Theo begin a fitful relationship that might border on cliché if not for the fact that Brooks’ subject isn’t love. It’s race in America. And her gripping, tragic conclusion to Horse exemplifies the truth of Faulkner’s memorable assertion: “The past is never dead. It’s not even past.”