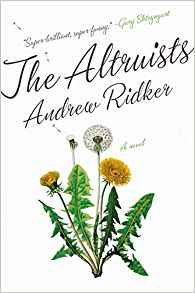 Before Arthur Alter, the adulterous and widowed father in Andrew Ridker’s debut novel, The Altruists, there was Zadie Smith’s Harold Belsey in On Beauty and Jonathan Franzen’s Chip Lambert in The Corrections.

All three are failed academics, all three commit some sort of sexual transgression — adultery in two cases; an affair with a student in the third — for which they atone. And all have the trappings of intelligence — though, to the delight of the reader, they are demonstrably less brilliant than they believe themselves to be. They are unlikable, they are only ever partially redeemed, and they are white.

Arthur’s plan to save the family home in St. Louis, which he can no longer afford without his children’s financial aid, drives the plot of The Altruists. The Alters are mostly estranged from one another since the death from breast cancer of Francine Klein, Arthur’s wife and mother to Maggie and Ethan. Arthur invites the children home to St. Louis for a weekend, and both reluctantly accept.

Much of the novel, however, is filled with recollections. Ridker gives us Maggie’s youth, her genuine relationship with her mother, and her frustration with her unengaged father; Ethan’s first relationship with a man, in college; and Arthur’s ill-fated international-development stint in Zimbabwe.

Even Francine’s life is recollected in several chapters, the most important of which includes the boyfriend she keeps during Arthur’s time in Zimbabwe, the one who invests her money in a fund she will hide from Arthur and bequeath to her children. This is the fund Arthur needs in order to save the house.

Ridker’s debut is funny. The novel’s is a sort of literary humor that takes aim at the inane preoccupations of the American petty bourgeois: affairs, mortgages, social status, the relative rank of the private university to which your children have been admitted (or not), as well as the particulars of their lives once they are enrolled.

For example, Ridker describes Senior Week at Danforth University: “If there was a better portrait of civilization-threatening entitlement than two-hundred wasted undergrads in inner tubes clogging the Meramec River in Missouri, Maggie couldn’t name it.”

Early in the initial chapter, Francine, a psychologist, counsels a married couple. The husband, his wife reports, “likes to dress up in a bodysuit and pretend that he’s a household pet.” The kink is “ridiculous,” the wife tells Francine, because “Marcus is a well-regarded trial lawyer with a firm to run.”

Francine concludes that the couple is the former of two types: “those whose neurotic temperaments had them convinced that even the slightest change of mood was cause for alarm...that a dose of unhappiness was surely depression,” and those “with legitimate issues to work through.”

Given the affair, Francine’s death, Ethan’s unresolved attachment to his lover, and Maggie’s unprocessed grief for her mother, the Alters should fall into the latter category. So why does The Altruists feel like an otherwise well-crafted novel in search of a hook worth the reader’s time?

The answer lies, I think, in the similarities between Arthur Alter, Harold Belsey, and Chip Lambert. Take, for example, a secondary but important parallel between Arthur and Chip: an international adventure in which each man causes a great deal of harm.

In Franzen’s novel, Chip aids in a Lithuanian financial scandal in a rapidly deteriorating and increasingly Hobbesian state. In Ridker’s story, Arthur receives a grant from a dubious organization to travel to Zimbabwe and build a latrine made from a cement Arthur invented.

The cement doesn’t meet code in high-income countries, but Zimbabwe, Arthur realizes, lacks the regulatory sophistication of, say, France. His latrines cause a deadly outbreak of sleeping sickness, and Arthur flees the country.

Both The Corrections and The Altruists share a similar, ostensibly political thesis: Americans, usually men, despite thinking of themselves as international good Samaritans (altruists!), cause a great deal of harm in search of profit (intentionally) by virtue of their ignorance (unintentionally).

The harm plays out on a global level — in Zimbabwe and Lithuania — and on the personal level, as with the affairs of Chip/Harold/Arthur. If these are difficult realities to dispute, this is, in part, because Franzen and Smith have so effectively entrenched this narrative in our cultural imagination. The Corrections was published in 2001 and praised in 2008 for anticipating “the concerns of the next seven years.” On Beauty was published in 2005.

Twenty years on, like the wars in Afghanistan and Iraq, are the hazardous adventures of fictional, fumbling men still funny? Is it enough for a novel to lambaste and expose the incompetence of men like Harold and Chip and Arthur when their real-life counterparts are still more or less running the show?

Arrogant ineptitude and emotional immaturity vested with power, will, I suppose, always be funny in its own way, especially when a book, like Ridker’s, eventually strips its man of the power only he believes he should possess. However, the capacity of satire — whether Franzen’s, Ridker’s, or Smith’s — to jostle us out of complacency has since proved painfully wanting.

This is why The Altruists can feel at times so thin, even as it truthfully reconstructs a society we would rather not recognize. It is a humorous elegy to myriad aspects of a dying life in which tenured professors are perennial adjuncts; where private-school-educated youths flee their suburban enclaves and move to the city, where they get by while nursing or wasting their parents’ resources; and where, ultimately, middle-class aspirations evaporate amidst the larger collapse of the American Dream.

The Altruists is accurate in this sense, but hardly prescient. Where does it all leave a novel that could have been written in 2001?

Daniel Weaver is the social-media and marketing coordinator at East City Bookshop in Washington, DC. His writing appears in Radii, the Full Stop Mag Blog, and elsewhere. Find him on Twitter at @danielaxweaver.