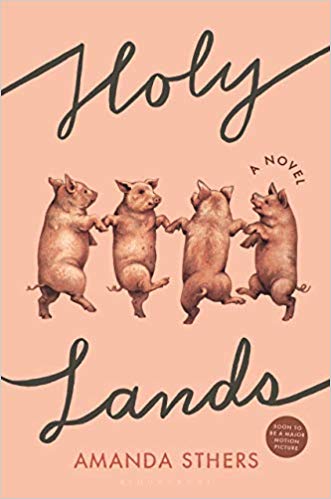 My grandfather Joe, executive officer on Subchaser 346 in the North Atlantic, kept every one of the scores of letters my grandmother Marjorie wrote him in 1918. As I read those letters in this digital age, I am profoundly moved by the palpable yearning, the patience, and the attempts to stave off fear with newsy, affectionate normalcy. I am beginning to see the shape-shifting puzzle pieces of my grandparents’ relationship through them.

Asking us to do the same, Amanda Sthers, in Holy Lands, writes a compelling novel of familial relationships using an epistolary approach. We know writing letters requires patience and pace, thoughtful consideration of ideas, and a resolution of the tension between meaning what one says and saying what one means.

Letters require time to write, time to receive, and time to respond. Nothing is rushed; words, then, have real meaning. But Sthers also persuades us through the medium to own the perspective of each of her five narrators. Indeed, each letter in Holy Lands is a soliloquy about pain, separation, and belonging.

The story begins in 2009 outside of Nazareth with Harry Rosenmerck, a physician and Jewish émigré from New York who does not have a phone. The focal point in the novel, he writes letters — his arms-length way of dealing with the complexities of his family back in America on his own terms. “If I had a telephone, we’d never say anything to each other. Nothing important.”

Almost nothing about Harry is simple. We find he has set up business as a pig farmer…in largely kosher Israel. His opening letter to Rabbi Moshe Cattan rationalizes his pork operation as the ultimate defense against Islamic terrorists as much as fulfilling the touristy tastes of the goyim, who demand scrambled eggs and bacon.

So begins Harry’s spiritual and relational journey with Rabbi Cattan in Nazareth and his fractured family in the U.S. Harry’s ex-wife, Monique, lives in Manhattan, as do their son, David, a gay playwright, and their psychologically unmoored daughter, Annabelle.

David poignantly writes, “I keep writing despite your silence. To maintain a bond. So I won’t one day find myself standing face-to-face with a stranger who’ll turn out to be my father.” Even as David portrays himself as more and more like his father, he asserts that, unlike him, “Yes, I love men. Or ‘one man,’ I should say.”

David’s yearning for deep connection is also reflected in his sister and mother. “Silence hurts less on paper. We’re all separated — mother, Annabelle, you and me. You are a piece of a puzzle on the wrong continent.”

Annabelle shares a crushing reality of not belonging, stating metaphorically, “In fact, I haven’t found my own country.” A career student, she is desperate for connection in doomed relations with men.

She writes to Harry, “You’re the only one I can talk to about my heartaches. Mother wants to be my friend and David is just too gay.” But Harry is a cardiologist for the physical heart; he is not a doctor of the broken heart.

Monique has appointed herself the interpreter of her children’s relationships with their father. With Annabelle, she dispenses equal measures of breezy support and biting criticism:

“You’re looking for your father [in other men] because he left us for the first two years of your life…Some wounds never heal…Or you meet a man whose neurosis covers up your wounds and it works.”

Rabbi Cattan is a 39-year-old foil to Harry’s cynical humor and emotional constipation. Harry responds to the rabbi’s invitation to talk, “When you make your life about religion, what do you know about life?” Tellingly, Harry adds, “Do you ever talk about feelings — anger, rage, love, or leaving God out of it?”

But it is to this spiritual ombudsman that Harry reveals his parents’ imprisonment at Birkenau during the Second World War. “That’s where I was conceived. I never asked how. I’m living proof we make love with bones more than flesh.”

So, it is with the background of the Shoah that Harry suggests a difficult relationship, too, with Israel, “where no one would tell the Jews they didn’t belong.” Indeed, Harry wonders what it means to be Jewish and a father. Perhaps “belonging” in the holy land of the title is the promised land where love exists in each family member.

When an illness emerges, we begin to think that reconciliation is but a letter or phone call away. However, Sthers spares us the predictable sentimentality that would rob her well-drawn characters of their complexity and their messy but necessary journeys ahead.

Sthers’ Rosenmerck family is neither safe nor has it found the truth. But despite being each other’s virtual prisoners, they begin to exchange affectionate letters. While Sthers may be guilty of loading up narrators with a fair measure of neurotic baggage, we are left with characters who bug us and endear us through their painful search for love.

As Harry says, “Sometimes we see things more clearly when we’re not in front of them.”