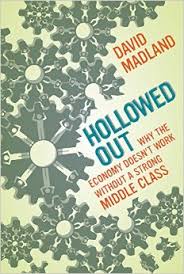 As politicking heats up for the 2016 presidential election, the polarization of government and society is evident. Simplistic ideological positions reject moderation, pragmatism, or compromise. The new populist cause célèbre ­— income inequality and the loss of America’s middle class — has become yet another set of strident sound bites.

However, in his new book, Hollowed Out: Why the Economy Doesn’t Work without a Strong Middle Class, David Madland attempts to parse the history, causes, and complex solutions to the inequality that affects the future of economic, societal, and democratic growth in the United States.

Asserting that “the economy is an interrelated system of people, laws, and culture that has been destabilized by extreme levels of inequality and a weakened middle class,” Madland’s goal is to explore the link between middle-class health and national economic health for all citizens.

He suggests, “The hollowing out of the middle class has undermined trust, caused poor governmental performance, weakened and destabilized demand, and blocked human capital development to great economic harm.” Now, because of improved metrics, patterns of growth internationally, the Great Recession, and the nation’s unequal and slow recovery, the attention of economists, the media, and politicians is focused on the issue as never before.

Indeed, many of Madland’s statistics are staggering. For example, in constant dollars over the last two generations, median family income and hourly wages for males has declined. By contrast, “CEO compensation…has increased from less than 30 times that of the average worker in 1978 to over 350 times what the average worker made in 2007,” and following the end of the Great Recession, “Fully 95 percent of the income gains have gone to the top 1 percent of income earners.”

Madland highlights the benefits of a strong middle class, such as higher levels of pervasive societal trust, which is needed in commerce and politics to promote healthy long-term growth rather than encouraging shortsighted, short-term earnings or political gains.

In the modern economy, a skilled, healthy, and entrepreneurial workforce is the driver of economic growth.” Yet, over the last 30 years, stagnant incomes, high debt loads, rising costs of health care and tuition, and poor education outcomes have caused the political influence and economic well-being of the poor and the middle class to fall sharply in relation to the wealthy and also to the middle class in other advanced economies around the world.

Madland decries the results of “trickle down economics” that had its roots in the Reagan era. That theory suggests that lower tax rates promote investment and greater production in the country, which in turn lead to growth and benefits for all.

Madland and others argue that demand creates growth and that “trickle down,” in the words of Nobel Prize-winning economist Joseph E. Stiglitz (one of his sources and author of The Great Divide), has really been “trickle up” to the very rich, large corporations, lobbyists, and super-PACs to the detriment of the middle class and the poor.

Hoping for a transformative moment now that the issue is part of the national debate, Madland offers some progressive solutions for a U.S. economy that should work for all its citizens. He proposes that policies need to change away from favored treatment of big business, the wealthy, and the well connected.

He advocates limiting the influence of money in government and elections, better regulation of Wall Street to prevent excessive risk, the institution of universal early childhood education, raising and indexing the minimum wage, and strengthening unions, among a number of other reforms.

As managing director of economic policy at the Center for American Progress, Madland will likely be dismissed as a liberal or socialist by small-government/low-tax supporters no matter how pragmatic and thoughtful his arguments are. Unfortunately, his book does not organize his thesis effectively to persuade his critics otherwise, despite an impressive 78 pages of documentation.

The author’s argument is diluted by repetitive refrains about the major topics in chapter after chapter. My sense is that Madland took articles he has written for the Center for American Progress (and he has written scores of them related to the subject) and strung them together in a delimiting format that undercuts his otherwise provocative and thoughtful analysis. Yet, at the core of his position are important ideas worthy of nuanced debate and further research by all sides.

Indeed, instead of having the lowest social mobility, the highest income and wealth inequality, a polarized electorate, a declining education, and high poverty rates, Madland believes America can once again assume the economic and social promise of its Founding Fathers as a country founded by and for the middle class.

Hollowed Out posits that, through intentional and pragmatic policies, the middle class can reassume its position as the driving force and engine of development it was in post-World War II America.

A smart, compelling collection of essays blessedly free of self-pity.