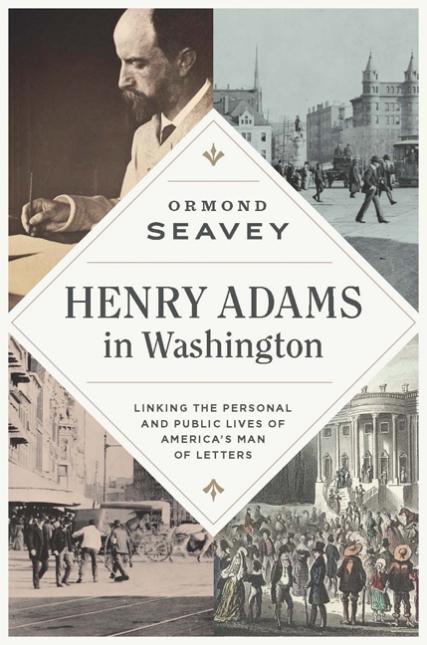 If an academic book is one that can be taught in college, then Henry Adams in Washington: Linking the Personal and Public Lives of America’s Man of Letters succeeds. In fact, this book by Ormond Seavey, an English professor at George Washington University, reads like a semester’s course on why Henry Adams ought to be elevated to the pantheon of 19th-century writers alongside Mark Twain, Henry James, Edith Wharton, Nathaniel Hawthorne, Walt Whitman, Emily Dickinson, Ralph Waldo Emerson, and Henry David Thoreau.

Seavey maintains that Adams (1838-1918) has been deprived of his rightful place in the literary stratosphere and proposes restoration. He starts by stating that the writer’s nine volumes entitled History of the United States of America (1801-1817) “belong alongside the greatest works of American creative writers.”

Further, he asserts the books comprise “the greatest work of history composed by an American…yet…unacknowledged in its own country,” and he intends to bring Adams the recognition he feels he deserves in the U.S. The professor concedes some literary critics might disagree with him, but he presents his case with pedagogical fervor and a few too many convoluted sentences:

“[Adams’] Washington turns out to be an essentially imaginative construct whose dimensions and appearances correspond to what others experience except that he has converted those details into a complex notion somehow independent of the seemingly solid realities experienced, for example, by James Madison, John Randolph, Ulysses S. Grant, Henry Cabot Lodge, or Theodore Roosevelt.”

Seavey scores high on presenting Adams as a man of letters but falls short on illuminating the personal side of the man. Publicly, Adams was known as a Boston Brahmin with a prestigious lineage: President John Adams (1735-1826) was his great-grandfather, and President John Quincy Adams (1767-1848), his grandfather. He made his own mark as a noted historian and novelist.

Yet even 100 years after his death, the personal man remains elusive because, for reasons Seavey doesn’t explain or explore, Adams resisted transparency. Other than his multi-volume history, he refused to publish under his own name and sometimes went to great lengths to camouflage his authorship. Why remains unknown.

When Adams worked for his father, Charles Francis Adams Sr., in the House of Representatives, he wrote anonymously as the Washington correspondent for Charles Hale’s Boston Daily Advertiser. Later, when his father became Abraham Lincoln’s ambassador to the Court of St. James, Adams worked as his father’s private secretary and wrote anonymously as the London correspondent for the New York Times.

Was he anonymous because of conflicts of interest between working in politics while working as a journalist? Seavey doesn’t say; he simply describes Adams as “that master of conspiracies and disguises.”

After Adams married and moved to Washington, he wrote two novels, each one blanketed in secrecy: Democracy, which Seavey describes as “a novel disguised as autobiography,” was published anonymously, and Esther, which was published under the female pseudonym Frances Snow Compton.

Why the camouflage? Seavey suggests that Adams hid behind a skirt because he was unwilling to have his DC neighbors know he was the one exposing the city’s deficiencies. If his novels, based on real people, were published under his name, he may have jeopardized his social status in Washington, where he and his wife, Clover, John Hay and his wife, Clara, and Clarence King, a pioneering geologist and entrepreneur, formed an elite little club they called “The Five of Hearts,” the title of Patricia O’Toole’s spectacular 1990 biography, which was subtitled “An Intimate Portrait of Henry Adams and His Friends, 1880-1918.”

That loving quintet splintered on December 6, 1885, when Clover Adams, 42, committed suicide by swallowing potassium cyanide. The evening newspaper reported she had dropped dead from paralysis of the heart, which may have been strangely accurate, because the writings of others indicate she knew her husband had fallen in love with another woman, Elizabeth Sherman Cameron.

That Christmas, days after his wife’s death, Adams sent Cameron a piece of Clover’s favorite jewelry, requesting she “sometimes wear it, to remind you of her.” He had been writing Cameron passionate letters since 1883, two years before his wife took her life, and continued for the next 35 years of his life, although, according to Eugenia Kaledin’s The Education of Mrs. Henry Adams, their relationship was never consummated.

These personal details are ignored by Seavey, although available in the biography of Adams written by Ernest Samuels (1903-1996), who received the Parkman Prize, the Bancroft Prize, and the 1965 Pulitzer Prize for his three-volume study. Yet Samuels is not listed in Seavey’s bibliography and is only cited once in passing, a strange omission in a book purporting to link “the personal and public lives of America’s man of letters.”

The most intriguing monument to the mystery of Adams is the bronze sculpture he commissioned in memory of his wife, frequently called “Grief.” “Henry Adams left it to August St. Gaudens to preserve forever the experience of [his] loss. Visitors to Rock Creek Cemetery [in Washington, DC] can see it for themselves. And that is all I am going to say about that,” Seavey writes.

The professor ends his book a few pages later, having shown in full the public life of Henry Adams but leaving his personal side in shadows, still detached and disparate.