He Had It Coming: Four Murderous Women and the Reporter Who Immortalized Their Stories

A fascinating, visually rich look at the tawdry real-life crimes that inspired “Chicago.” 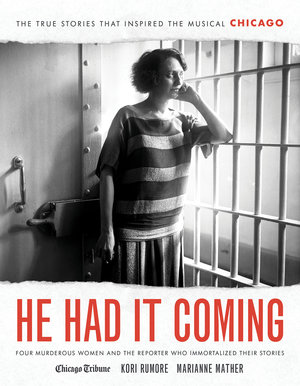 Beulah Annan confessed to shooting her lover during a rendezvous at her apartment, while her husband was at work. It was self-defense, she said, even though he’d been shot in the back. The body of Belva Gaertner’s boyfriend was found slumped in the driver’s seat of her car outside her home; he had been shot with her revolver, and her clothes were covered in blood. When the police showed up, she claimed she had no idea what had happened — she had been so drunk she’d blacked out.

In back-to-back trials in Chicago in the spring of 1924, both women were acquitted of murder. “A jury isn’t blind,” a female inmate facing a murder trial of her own told Chicago Tribune reporter Maurine Watkins, “and a pretty woman’s never been convicted in Cook County.”

If the crimes of Beulah and Belva sound familiar, that’s because Watkins transformed their stranger-than-fiction escapes from justice into a 1926 play that captured the outrageous excesses and pervasive corruption of Jazz Age Chicago. Beulah was renamed Roxie Hart, Belva became Velma Kelly, and “Chicago” — destined to become both a hit Broadway musical and 2003’s Oscar winner for best picture — was born.

He Had It Coming tells the stories of the real-life women who inspired this pop-culture phenomenon. It’s also the story of how Watkins, a novice journalist who’d been with the Tribune only a few weeks when the first murder occurred, reinvented herself as a playwright.

Two current Tribune staffers — graphic artist Kori Rumore and photo editor Marianne Mather — receive top billing as the authors of this book, but it’s a group effort. The paper’s theater critic, Chris Jones, film critic Michael Phillips, and columnists Rick Kogan and Heidi Stevens add their insights into Chicago’s history, the hyper-competitive news business of the 1920s, and “Chicago’s” impact on the stage and on the screen.

The commentary, however, takes a back seat to the star of this particular show: the Tribune’s extensive news archive. Reading He Had It Coming is akin to browsing a well-staged and carefully curated museum exhibit. Vintage photographs, yellowed newspaper clippings, and an array of other historical records and artifacts have been unearthed and assembled to lavishly illustrate the story.

Accounts of the murder cases reproduced here reveal that Watkins took few liberties when she created her tough-talking, streetwise characters. Beulah and Belva became celebrities as they awaited trial in the Cook County jail, which housed so many accused female killers in 1924 that a section of cells was dubbed “Murderess Row.” They were also jailhouse philosophers, dispensing advice and soundbites to visiting reporters.

“Gin and guns…Together they get you into a dickens of a mess,” Belva observed in an interview. “No woman can love a man enough to kill him,” she added in another. “They aren’t worth it, because there are always plenty more.”

News coverage of their trials focused on their looks and stylish clothes. All-male juries were easily sold on their claims of being abused or mistreated by the men they killed, then obligingly posed for photographs with women they could have sent to the gallows.

Suspects who were less attractive were more likely to be convicted. Sabella Nitti — mocked in one news report as a “dumb, crouching animal-like Italian peasant” — was convicted of murdering her husband and almost hanged, despite the flimsy evidence against her. “Verdicts seem to be inversely proportional to the charm of the woman defendant,” her lawyer grumbled. “The homelier the woman, the more severe the penalty.”

Authors Rumore and Mather document their own paper’s cringe-worthy role in enabling these miscarriages of justice. One of the Tribune’s star reporters at the time, Genevieve Forbes, wrote the shockingly biased and racist description of Nitti, and the paper’s editorial writers suggested her supporters had “no proper place in America” and should “be sent back to Italy.”

The true story behind “Chicago” has been told before, in Douglas Perry’s The Girls of Murder City and in Ugly Prey, Emilie Le Beau Lucchesi’s deep dive into Nitti’s prosecution. He Had It Coming is lighter on detail and insights, but its illustrations-first approach offers a fresh and accessible introduction to an era disturbingly like our own, when celebrity and ballyhoo could handily defeat truth and common sense.

Watkins was disgusted by what she witnessed in the courtroom, but soon realized she was becoming as jaded as her subjects. “I got so I prayed for murders,” she later admitted. “Not that you ever have to pray long for murders in Chicago, but I prayed for ‘good’ murders and then I prayed that I would be sent to cover them.” She quit the Tribune after just eight months and left journalism for good.

“Chicago,” despite the upbeat razzle-dazzle of the musical and movie versions, was Watkins’ satirical attack on a twisted justice system that valued image over substance and produced such perverse verdicts. And that’s a message that holds up as well as any of its tunes and dance numbers.

Dean Jobb is the author of Empire of Deception, the true story of a master swindler who scammed the elite of 1920s Chicago (Algonquin Books). He teaches in the MFA in Creative Nonfiction program at the University of King’s College in Halifax, Nova Scotia. Follow him on Twitter at @DeanJobb.