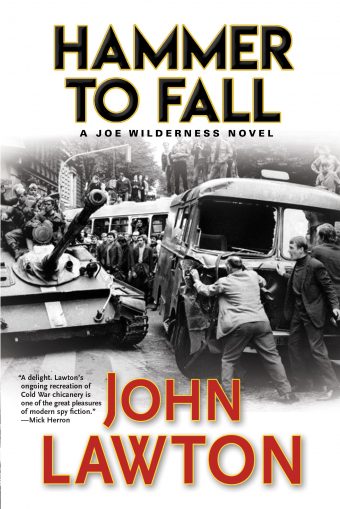 “A good schieber [smuggler] survived by being able to know when he was being lied to while lying himself.”

Such is the hall of mirrors in the double life of John Holderness, aka Joe Wilderness, in Hammer to Fall. This third installment in author John Lawton’s Joe Wilderness series spans the WWII rubble of 1941 London through the Soviet threat in Cold War Europe.

I love the Wilderness of Then We Take Berlin and The Unfortunate Englishman. These tales are taut and purposeful. The narrator provides deep color, if not ironic humor, while adding dimension to multiple plotlines over many chapters. By contrast, I found the 215 chapters of flashbacks and updates in Hammer to Fall to be somewhat disruptive; while some are integral vignettes, others are gratuitous.

Wilderness’ mother died in the bombing of London when he was 13. Essentially abandoned by his abusive father and schooled in the arts of patter and thievery by his grandfather and partner, Wilderness learned from a broken wartime system how to scavenge, profit, and survive. His emotional constipation notwithstanding, he learned lessons that made him a perfect recruit for Burne-Jones, an upper-class British MI6 intelligence officer.

Following the post-war division of Germany, Wilderness and his cohorts make money on the black market — their second job — by lifting cases of peanut butter, vodka, wine, or cigarettes from the PX or other sources. The bifurcated Wilderness is both a schieber and an MI6 officer. He’s a commoner in the predominately upper-class echelons of British intelligence, a chameleon surviving amid both classes.

At his core, Wilderness is in a state of unresolved conflict between civilian life, married to Judy, the daughter of his boss, Burne-Jones, and his spy persona: “She believed a husband and wife should have no secrets — and he didn’t.” Wilderness ricochets between the possibility of finding his soul or losing it in either civilian life or in his intelligence/smuggling work.

Suddenly, he’s banished to the snows of Lapland in an attempt to keep a Tory MP from investigating his recent role in a prisoner exchange in Berlin. Cooling his heels until the threat passes, Wilderness begins to sort out that something in not right in Finland, where “neutrality was a line drawn in the water.”

Undercover as a cultural liaison, Wilderness opines from the icy confinement of Lapland, “Following orders has never been my forte.” That gives way to, “Nothing undermines Intelligence like complacency.” Or boredom. Wilderness’ need to be “on the job” results in bootlegging Finnish booze across the border in an arrangement with Kostya, a Russian officer, and the vodka-deprived Soviets to the east.

Perhaps the discovery of Soviet attempts at procuring high-grade Finnish cobalt used as potential sheathing in tactical warheads leads to his being recalled to London by Burne-Jones. Or perhaps it's the fact that Wilderness was paid for vodka with classified documents used by the Soviet army as toilet paper.

Next, he travels to Dublin to learn Czech for a new assignment in Prague. The Russians are rolling in with their tanks in a Soviet takeover, jockeying for advantage in intelligence and counterintelligence initiatives.

And so Wilderness assumes a new cover: Walter Hansel, German tractor salesman. Against the geopolitical backdrop of escalating Soviet/West tension, Wilderness’ trail of spying leads to escalating stakes and unpalatable choices. Indeed, Wilderness finds he faces yet another prisoner exchange on the Glienicke Bridge in Berlin, “another shuffle on the Cold War’s chessboard.”

A number of characters from Lawton’s previous novels make cameos here — mostly, it appears, to create suspense or offer solutions to Wilderness’ various predicaments. Each brings to Wilderness a “hint of that forgotten feeling of belonging that only comes with ‘partners in crime.’” That said, some characters are more cardboard than substantial, more contrived than essential, thus eroding the effectiveness of the narrative in places.

Wilderness is a flawed actor in post-WWII Europe. He is complicated, likable, and happily annoying along the lines of such genre characters as Bernie Gunther, from Philip Kerr’s wonderful series, or Mick Herron’s idiosyncratic Slough House characters.

On balance, Hammer to Fall is an entertaining read. Joe Wilderness exists in the novel — as do we readers — in the “imperfect arrhythmia of takeoff and landing,” not quite soaring, not quite grounded.