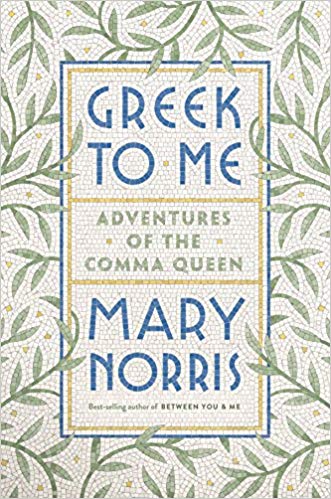 Greek to Me bursts with a cheerful lust for all things Hellenic: the language, ancient and modern; the mythology; the wine; the sunshine; the sea; and, occasionally, the men. If “Comma Queen” in the subtitle seems familiar, maybe it’s because you read Norris’ first book, Between You & Me: Confessions of a Comma Queen, a delightfully detailed look at extreme grammar and punctuation work on the copy desk at the New Yorker.

Norris’ fascination with language obviously serves her well in her job. She’s been a copyeditor at the New Yorker for more than 30 years. She talked her employer into paying for classes in Greek, saying it would help her do her job better. That wasn’t her whole reason, though. She just really wanted to learn it.

Where did this desire come from? Maybe it was a little bit from the fact that her father wouldn’t let her take Latin in high school. (“Was he against education for women? Yes.”)

Maybe it was the allure of Sean Connery in “Time Bandits.” Although he played Agamemnon in a wildly inaccurate film shot in Morocco, he still made her really want to visit Greece. In 1982, she went to talk to her boss about such a possibility, in spite of the fact that the language seemed utterly incomprehensible to her.

He was enthusiastic. Not only did he recommend English-language authors for her to read, he also got down a Greek reader from his shelves and translated a few sentences for her. She was astonished. It was “a Helen Keller moment. Greek could be lucid.” It wasn’t just strange-looking squiggles on a page. It could be read and understood, and she wanted to understand it. She was in love.

She took Greek classes for years: cramming modern Greek before she went on a trip, ancient Greek after she got back.

She even loves the Greek alphabet. If you don’t think a tour of the ABCs can be entertaining, go with Norris. She traces the alphabet we use from its Phoenician origins as a means of keeping traders’ records, through the Greek development of an alphabet to tell stories. The Greeks also changed writing from right-to-left to left-to-right and, in the process, changed the orientation of some of the letters.

“When we say that the Greeks ‘adapted’ the Phoenician alphabet, we mean they messed with it beyond recognition. They flipped the aleph (first letter) from right to left (a mirror-image K), moved the vertical line to the center, and rotated it, horns and all, ninety degrees to the left: voila — a crude A. And all this without benefit of a smartphone camera.”

What they did not have, she points out, was spaces:

If you’re someone who enjoys learning that the word “nausea” comes from the Greek naus, for “ship,” if it’s interesting to you to find out that “rosy-fingered dawn” is actually a description drawn from sharp observation and not just a lazy cliché, this book will be your idea of a good time.

Do you know enough of the Greek alphabet to try to sound out Greek words, no peeking? You’ll get plenty of chances here. Maybe you will be fascinated to know that describing Athena as “gray-eyed” does not mean that she looked dull, and that “wine-dark sea” did not refer to the sea’s color but to its mystery.

If you’re not much of a word nerd, Norris’ clear, down-to-earth writing still may appeal to you: “Surely Homer meant for Athena’s eyes to be beautiful — a poet would not dwell on the description of a goddess’ eyes to say they were as two thumbholes poked in a blackberry pie.”

The author is good company whether she’s marveling at ancient mosaics on Paphos, struggling with Greek bureaucracy to let her see the home of philhellene author Patrick Leigh Fermor, or flirting with the sailors on the ferry to Crete.

And whether she’s walking the Sacred Way of the Eleusinian mysteries — important sites in the myth of Persephone — or playing the role of Hecuba in a Greek-language production of “The Trojan Women,” her approach to Greek is full-immersion.

Especially when she goes skinny-dipping.

Susan Storer Clark is a former broadcast journalist who wrote and reported for the Voice of America and for WRC-TV. She has written for the Washington Independent Review of Books since its inception. Susan’s historical novel, The Monk Woman’s Daughter, was a finalist in the Nancy Pearl contest for literary fiction, and was named a favorite in historical fiction in the New York City Big Book award competition. She is currently at work on a second novel.

The Islander: My Life in Music and Beyond

By Chris Blackwell with Paul Morley

Reflections of a Brit kingmaker whose hits outnumbered his misses. Barely.