This smart YA novel tackles brotherly love, PTSD, and the limits of heroism 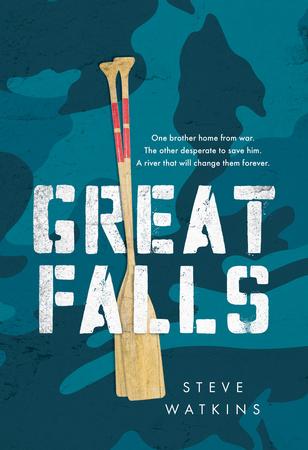 One can hope young people will find their way to the classics. Yet for the middle-schooler, a push to the shores of existential philosophy through something like John Green’s The Fault in Our Stars feels just right. Or, for the younger crowd, a nod to Melville through Jeff Smith’s graphic novel series Bone may be helpful. In this vein, currents of Joseph Conrad’s Heart of Darkness abound in Steve Watkins’ new novel, Great Falls.

The story features two brothers. Shane, a hard-hitting high school football player with a heart of gold — one can easily picture this character as Friday Night Lights’ Tim Riggins — and his older brother, Jeremy. Jeremy is home from tours in Afghanistan and considered a hero by locals for an incident of valor, where he “saved” a private from certain death. Footage of this feat was captured via helmet cam and went viral.

The book’s title plays on polyvalence — with the “great fall” referring to Jeremy’s sense that he “didn’t do enough for” this soldier, a young man who’s undergone several facial reconstruction surgeries and is profoundly isolated, languishing at Walter Reed Medical Center.

Jeremy is not proud, like the valiant soldier out of “Call of Duty” that many wish him to be, but instead feels cursed. Haunted by his time with the Marines, he’s riddled with guilt, shame, and anger. He suffers from insomnia, drinks to excess, and is hypervigilant. Jeremy regularly manages his anxiety by cleaning, taking apart, and putting back together his M-16.

Meanwhile, Shane attempts to keep the family afloat. He looks out for Jeremy’s wife, Annie, whom he may or may not be in love with, and cares for his nieces. Covering for Jeremy’s drinking binges, Shane often accepts blame on his brother’s behalf; for instance, when the family lawnmower to gets stolen — this due to a night of inebriation where Jeremy left the garage open.

Shane’s first fall in the book is a concussive knock to the head, leading him to run the wrong way on the field. Jeremy, in turn, provides a comforting, if PTSD-hardened, shoulder to lean on.

Soon enough, the brothers find themselves canoeing in the Shenandoah River and eventually the Potomac, heading for the actual Great Falls.

At the risk of sounding too glib about the siblings’ perilous journey, Watkins hits a lot of “dude” notes: There’s shooting, making out, getting high, getting drunk, fighting, stealing, trespassing, and bro-tastic heart-to-hearts. Put simply: This canoe trip is no Kurtzian slog or poetic discursive on PTSD.

But it doesn’t have to be. Instead, it’s a fast-paced read targeting the heterosexual middle-school-male crowd, those who admire military might, who want to put literature about rescue dogs behind them, and relish F-bombs in their fiction.

Meanwhile, adults and sixth-graders alike can appreciate the book for its clear depiction of PTSD, and its brisk action. It would be easy to read alongside your son/daughter/student and have a lot to talk about — particularly the conundrum of war, of intervening where, as Jeremy puts it, “Every time you think you’re doing something good for somebody, you end up hurting somebody else.”

Watkins conjures a superb balance with Great Falls, from images of still rivers and whitewater, to searing physical pain and emotional agony. The contrast provides space for readers to think about all sorts of falls — the gap between the excitement of a hard hit and the reality of traumatic brain injury; a hero’s welcome; and the torment he or she feels when trying to assimilate to life away from battle.

Such a packed novel would do well in graphic form, filled with maps and images both triumphant and grotesque. As it is, Great Falls is apt to spark curiosity about the ethics of war and how we might best relate to those who return from it.

Craigan Usher is a graduate of Georgetown University School of Medicine and the Director of Child and Adolescent Psychiatry Training at Oregon Health & Science University. He is interested in the use of literature in psychotherapy and medical pedagogy, detailing this in his paper, “Paging Child Psychiatrists: Reviewing the Developmental Canon.”