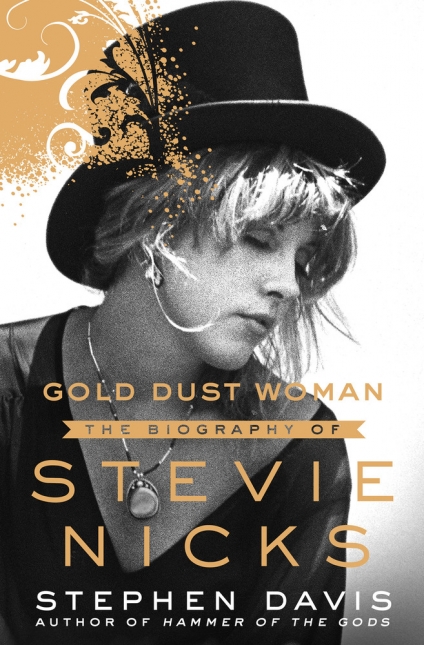 Stevie Nicks is among the most successful women in rock, but critical approval has not always followed. Even the late Tom Petty, among her closest friends in the music business, replied to her claim that “I’m in a rock ‘n’ roll band” with “Not really,” dismissing the Nicks/Buckingham version of Fleetwood Mac as not being real rock like the Heartbreakers.

Stephen Davis’ new biography sets the record straight and gives Nicks her due.

Nicks was born into a loving middle-class family in Arizona in 1948. Her young parents moved frequently around the American Southwest and California as her father pursued an increasing number of business opportunities.

Her grandfather, A.J., was a semi-professional musician and had an early and lasting impact on young Nicks. As a child, she filled a journal with her poems. This process would continue throughout her life. Her many musical collaborators would be enlisted to arrange the music for these poems.

The first and most important of these collaborators was Lindsey Buckingham. They attended the same high school in California. By chance, they both attended a Wednesday-night open-mic session at a local church. Buckingham started playing “California Dreaming” on the piano, and Nicks joined in on harmony. The audience was impressed. But the duo wouldn’t get together again for three years.

When they did, it was with local band Fritz; despite some regional success, Fritz never took off. The pair then teamed up as the duo Buckingham Nicks and relocated to Southern California. There they met Keith Olsen, an engineer at soon-to-be-legendary Sound City Studio in Los Angeles, where the lone Buckingham Nicks album was recorded.

At the same time, Mick Fleetwood was desperately seeking a way to continue his band, Fleetwood Mac, which had once again found itself without a guitar player. The band had begun life as a British blues band led by guitar virtuoso Peter Green. After his departure, they went through a succession of replacements with varying degrees of success. Olsen suggested Mick listen to the Buckingham-Nicks tapes, and soon an offer was made to the duo to join the band.

It was not a collaboration that made a lot of sense, at least initially. The rhythm section of Fleetwood Mac was blues-based, while the keyboard player, Christine McVie, wrote pretty pop songs. Buckingham and Nicks were quintessential So-Cal popsters.

The first album of this line-up, titled Fleetwood Mac, was slow to find an audience. Through relentless touring, the album continued to sell through 1975. The second single from the album, Nicks’ “Rhiannon,” the song about a Welsh witch, broke the album open and became her signature tune.

The relationship between Nicks and Buckingham, always fraught, began to unravel under the pressure of fame, drugs (including a prodigious amount of cocaine), and jealously. Buckingham, notoriously controlling in the studio, was often contemptuous of Nicks’ songs, only reluctantly agreeing to work on them — his refusal to recognize the quality of Nicks’ “Silver Springs” and blocking its inclusion on Rumors rankles Nicks to this day. Davis recounts several episodes of Buckingham’s harsh emotional and physical abuse of Nicks.

This situation was exacerbated when her songs proved to be more popular and commercially successful than his. These tensions came to a head with the recording of their second album, the phenomenally successful Rumors, which chronicled the breakup of the band’s two relationships. It is truly remarkable that the band has been able to maintain a successful professional relationship for over 40 years, albeit with various members taking breaks from the band for extended periods of time.

Davis, author of the acclaimed Led Zeppelin biography, Hammer of the Gods, has produced in Gold Dust Woman a mostly sympathetic portrait of Nicks. He documents her hard work and devotion to her craft, her importance to Fleetwood Mac’s stratospheric success, her struggles with recurring vocal problems, and her substantial achievements as a solo artist.

The author also covers (sans tabloid sensationalism) Nicks’ numerous romantic affairs inside and outside of the Fleetwood Mac extended family. Most noteworthy among these lovers are the Eagles’ Don Henley and Joe Walsh (the latter the love of her life), and record-industry mogul Jimmy Iovine.

He doesn’t hide, however, his bemusement at the spacey and mystical side of Nicks’ personality, her “girly-girl” fascination with makeup and clothes (at times, her fashion sense has been as important to her female fans as her music), and her immersion in Welsh mythology following the success of “Rhiannon.”

Stevie Nicks, whom Rolling Stone once proclaimed the “reigning queen of rock ‘n’ roll” has led a remarkable and interesting life, succeeding in an industry dominated by powerful men while establishing a strong artistic vision and style. Here, Davis has written a compelling and fascinating account of her life. If you’ve been touched by Nicks’ music, you’ll enjoy this book.

Where the Past Begins: A Writer’s Memoir