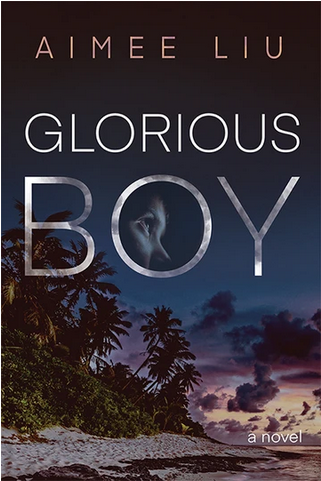 This novel tugged at my heart in all the right ways. I got teary explaining to my husband why I’d cried the night before, when I’d stayed up until two in the morning finishing the book. As her characters’ journey becomes increasingly fraught, Liu walks the emotional tightrope perfectly, never swaying into sentimentality but also never shying away from heartbreak.

In 1942, Claire Durant is an American anthropologist living in Port Blair, a town in India’s remote Andaman Islands, with her husband, Shep, a British surgeon, and their son, Ty. The couple’s biggest problem is their inability to connect to 4-year-old Ty, an intelligent but mysteriously mute child who’s much more attached to their servant girl, Naila, than to either parent.

Naila is just 13 but has an almost magical ability to communicate silently with the boy. When she was orphaned, Claire and Shep took her under their wing, and though she’s part of the family, she’s also forever separated by color and class:

“Shep and Claire told each other they were lucky that someone in the household knew how to read their son’s mysterious mind. Lucky that this arrangement allowed them both to pursue their ambitions while he was still so young. And yet, Shep thought, it would be much better for them all — especially for Claire — if Ty’s Someone wasn’t a servant.”

They’ve all heard news of the war in Europe and farther east, but so far, their little corner of the world is untouched, until suddenly, the Japanese are closing in. A mandatory evacuation order is issued for everyone. Every European, that is.

Naila is crushed to learn she must stay behind. When it’s time to leave, the Durants can’t find her or Ty. Shep decides to stay and find his son; when his wife refuses to get on the boat for Calcutta, he forces her aboard and gives her a sedative to save her life.

In Calcutta, Claire is desperate to reunite her family. Inspired by the Choctaw Code Talkers of World War I, she devises a code using the language of the indigenous Biya hunter-gatherers she’s been studying and maneuvers herself onto a special operations team (all men, of course).

Together, they return to the island Claire fled, moving secretly and gathering intelligence. The Andamans are crucial to the Allies’ efforts. Claire is under strict orders not to search for Shep and Ty, but of course she’s waiting for her opportunity to find them:

“Ty and Shep could be standing on a bluff in that patch of darkness right there…They could be lying at the feet of a Japanese search party just beyond that beach. These islands have devoured whole tribes…But no, she gives herself a ruthless jab. The islands themselves aren’t the culprit. The worst killers have always been the invaders who arrive by boat.”

There are a lot of World War II novels. This one, though, doesn’t feel like a book I’ve read before. In India, the war happened at a time when the struggle for independence was in full swing, so it’s not just one fight our characters are caught up in.

Port Blair was established as a penal colony and has a long history of housing political prisoners. Author Liu does not shy away from the brutal reality of British colonialism: We can’t see the Brits as clear good guys. Glorious Boy is very much about “othering,” and the narrative shows time and time again that people are not seen as human until you know them.

The book is chockfull of intellectual quandaries, period details, and dialogue that sounds natural. From the text and author’s note, it’s clear that the novel is carefully researched, and the rich detail is certainly a strength.

But sometimes, especially in the second half, the detail gets in the way of the pacing and the characters’ emotional journeys. I sometimes found myself restless, eager to move past an intricately worded passage to get to the exciting stuff. The pacing is also frustrating at times because we alternate among the perspectives of Claire, Shep, and Naila — at points, one storyline is more interesting, or one character is in such desperate circumstances that you can’t wait to get back to them.

Still, Glorious Boy is an exciting read, a family story that morphs into a high-stakes adventure. But at the heart of the book is the desperate, primal need to protect a small, precious child. A child his parents have not neglected but also have never placed at the center of their lives.

As Claire puts her life on the line, she’s searching for the son who she doesn’t really know. A child she’s never understood. The symmetry of her search for his physical body and her search for his true self is stunning — and also subtle.

Claire and Shep envy Naila’s effortless grace with their child, but Naila’s love for Ty is just as complicated. After her parents died, Naila clung to Ty “like a security blanket,” but he isn’t hers. This isn’t her family. Claire and Shep need to find Ty. Naila needs to find herself.

Norah Vawter is a freelance writer, editor, and the Local Authors Editor of online magazine DCTrending.com. She lives in Northern Virginia with her husband and son.

Tesla: A Portrait with Masks, a Novel

By Vladimir Pištalo; translated by Bogdan Rakić and John Jeffries