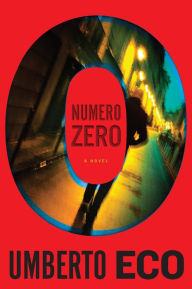 Readers of Foucault’s Pendulum will find themselves immersed, in the pages of Numero Zero, in a familiar Eco-esque landscape of the publishing world, secret societies, and arcane conspiracies. Unlike Pendulum, however, this slim satirical novel focuses exclusively on sinister undercurrents in post-World War II Italian politics — a milieu relatively unfamiliar to many American readers.

The setting is a newsroom in 1992 Milan where Braggadocio, a courageous but gullible journalist, uncovers a supposed plot by Fascist diehards, who spirited Mussolini away in the last days of the war to safety in Argentina, in the hope — almost realized — of engineering his victorious return a quarter-century later.

While the Mussolini plot is a pure pipe dream, Braggadocio also unearths an equally fantastical scheme that is historically true and involves a real (if mostly forgotten) CIA operation in postwar Europe that supported rightwing terrorist acts to be blamed on the Communists.

That a covert operation as farfetched as CIA’s “Project Gladio” actually occurred is one of the many ironies that Eco spins from this story about the scheme of a shady media magnate known as the Commendatore to use the scandalous stories gracing the “numero zero” issues of a selectively distributed phony journal to blackmail his way into the upper echelons of Italian society. The skeleton crew of six reporters is unaware that the newspaper dubbed Domani (Tomorrow) will never see the light of day; they’re just told that the “numero zeros” are pilot editions establishing “proof of concept.”

The managing editor, Simei, and Colonna, his middle-aged hack and assistant editor, serve up a delicious smorgasbord of cynical techniques for impugning the innocent, exculpating the guilty, purveying insinuation without asserting facts, and creating news stories out of whole cloth.

The art of discrediting complaints from the victims of newspaper hatchet jobs, for example, is described with the help of a fictitious news story implicating a Signor Perniketti in the assassination of Julius Caesar (the headline reads “Ides Murder Suspect Denies All”). Perniketti complains in his letter that the only reason he celebrates March 15th is that he was born on that day in 1944 and insists he never threatened Caesar’s life.

In response, the reporter notes that Perniketti “does not deny” Caesar was assassinated on the Ides of March in ‘44 and finds Perniketti’s admission that he always celebrates the date with friends a “strange” coincidence. The reporter solemnly asserts that his notes show Perniketti admitted in the interview that one should always render unto Caesar that which is Caesar’s, whereas “a source close to Perniketti…has assured me that that which was rendered unto Caesar was twenty-three stab wounds.”

Colonna explains to his reporters that citing confidential sources and reporters’ notes always tends to inspire confidence because “it suggests that there is evidence.”

The editors also initiate their staff into the art of “fact-checking” a potential story in the only way that really counts: ascertaining whether it could embarrass the publisher. One reporter learns this to his mortification when he turns up a scam whereby chivalric titles in bogus heraldic orders such as the Order of the Ecumenical Knights of Malta are marketed to humbly born business magnates. This promising investigation must be scrapped when Simei reveals that the publisher himself received his knightly title of Commendatore (Knight Commander) from a nonexistent “Order of Saint Mary of Bethlehem.”

There is a love story subplot in Numero Zero, of course: Colonna is romantically entangled with Maia, a lovely cub reporter and, near the end of the book, they take flight in a frantic effort to escape the conspirators who silenced the luckless Braggadocio. However, all three are little more than stick-figures and the author makes only a token attempt to engage our concern for their plight.

What Eco apparently thinks we should care about is the fact that politics and journalism are equally corrupted, and citizens have become so jaded to sensational scandals that even outrageous and lethal acts, such as those committed under the auspices of the CIA’s Project Gladio, fail to stir us from our apathy.

Eco has noted elsewhere that he first tried to write Numero Zero some 20 years ago but put the idea aside because it was too much like Foucault’s Pendulum. Perhaps he changed his mind because the subsequent history of corruption and conspiracy is even more fantastical than the imagined plots of neo-Templars, Rosicrucians, Bavarian illuminati, and Freemasons with which he regaled readers in that earlier book.

Of course, one might rejoinder, that’s only Italy. But is it? Readers of Numero Zero may think twice before turning uncritically to their own daily newspaper for answers.

Howard Davis, as a former journalist himself, reminds us he is not wholly unacquainted with the sketchy tradecraft employed by some members of the Fourth Estate. He is also an aficionado of spy stories and of Chinese Cresteds, with whom he and his wife live in Virginia.