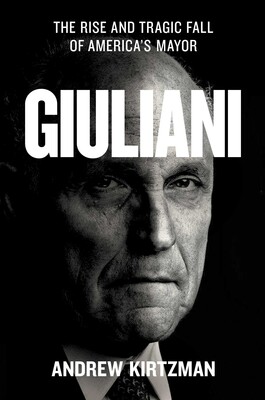 Why do ostensibly upright, respected people lose their moral bearings? (In the United States, this question gained special salience during the last presidential administration.) More specifically, how did “America’s mayor,” Rudolph Giuliani, descend to the level of raving conspiracy theorist and law-breaking toady? Maybe his transmogrification should not have been a total shock.

In Giuliani, his second book about the man, author Andrew Kirtzman — who, as a political reporter, covered Giuliani for 30 years — examines the onetime New York City mayor’s lifelong rigidity, self-serving moral calculus, lust for power, and constant need for ego gratification. The 9/11 hagiography aside, Giuliani long teetered on the precipice and needed relatively little to push him over the edge.

Yet in his early life, Giuliani seemed invincible. Born in Brooklyn to an extended family of petty criminals (including his father), he managed to excel in school, college, and law school. Inspired by President John F. Kennedy in the early 1960s, Giuliani vowed he would be the first U.S. Italian Catholic president. This ambition would be his lodestar.

He became the youngest associate attorney general in U.S. history, convicting a corrupt United States congressman while serving in that role. As a U.S. attorney, Giuliani was credited with taking down the Mafia in this country. Writes Kirtzman:

“His remarkable successes…cemented his image as a fearless crusader against the corruption and entitlement of New York’s political, financial, and social elites.”

Giuliani won the mayoralty of New York in 1992 and famously transformed a seemingly anarchic city. Crime dropped, and the budget was balanced. Then came the tragedy of September 11, 2001, and the international fame that grew from his leadership that day. Access to the highest reaches of the U.S. government, a knighthood from Queen Elizabeth II, and many other accolades followed.

But even during Giuliani’s “good” years, there was trouble brewing. His stringent Roman Catholic upbringing, particularly its emphasis on hierarchy and authority, manifested in him as a taste for autocracy that left him “determined to stamp his view of right and wrong on every situation.”

Turning New York City around came at the cost of brutal civil rights violations that left Giuliani unrepentant. Instead of vowing reforms when innocent Black citizens were killed by white police officers, he blamed the victims and their families.

Giuliani’s approval ratings had, in fact, cratered by the eve of 9/11. But that fateful day turned his fortunes around. When he left office in early 2002, Giuliani had “every conceivable door…open to him; he could run a foundation, a corporation, a law school. All would have preserved his Olympian stature.”

Instead, he chose to cash in. “For thirty years he’d chased the narcotic high of power, rarely displaying an interest in material possessions,” writes Kirtzman. Now, money substituted for lost political might. To this end, Giuliani formed a consultancy that offered reputation-laundering to organizations such as Purdue Pharma (of OxyContin infamy) willing to pay his high fees.

But Giuliani’s venal streak got worse after 2008. Having lost his bid for the Republican nomination and hence his lifelong dream of the presidency, he felt he had nothing left to lose. There would no longer be any limits in his soliciting of business. Soon, he would amass a client list that “read like a collection of villains from James Bond films” — e.g., an Iranian militia group accused of slaughtering Kurds on behalf of Saddam Hussein. And as a harbinger of the future, he hired himself out in the notoriously corrupt Ukraine of that time.

This brings us to Giuliani and Donald Trump. The two had been friends for decades, both of them swaggering “alpha males” from the outer boroughs (and with other eerie similarities too numerous to list here). Trump’s presidential candidacy would offer Giuliani a way back onto the national stage after years in the wilderness.

In return, Giuliani helped shore up a flailing Trump campaign in 2016. After Trump’s inauguration, Giuliani became the new president’s personal attorney and instigator of some of the worst acts of that administration.

Giuliani returned to his old Ukraine stomping grounds in 2018 as part of a fantastical attempt to prove that “Russian interference” in the 2016 election had in actuality been a ruse cooked up between Ukraine and Trump nemesis Joe Biden.

With that conspiracy theory failing to gain traction, Giuliani in 2019 threatened new Ukrainian president Volodymyr Zelenskyy with a suspension in U.S. military aid if Zelenskyy didn’t agree to investigate Biden and his son Hunter. This became grounds for Trump’s first impeachment, “sent a signal that America’s support for [Ukraine] was tenuous at best,” and was very possibly part of Putin’s calculus when he invaded Ukraine in February of this year.

In 2020, Giuliani goaded Trump into refusing to concede the presidential race, filed numerous bogus lawsuits in multiple states, made baseless allegations against voting-machine companies, and helped stir up the mob that stormed the U.S. Capitol on January 6, 2021.

This was Giuliani’s last-ditch attempt to cling to power. The end of Trump’s presidency also meant the end of “Giuliani’s political influence, relevance to the media, and ability to attract clients.” He lost his law licenses and still faces felony charges and possible prison time.

But no penance will ever make up for the havoc Giuliani wreaked in the pursuit of his own interests —from the “stop the steal” lunacy still poisoning American political discourse to the Russian invasion of Ukraine. In Andrew Kirtzman’s telling, Rudy Giuliani has for the past two decades taken the low road every single time. The world is now paying the price for his misdeeds.