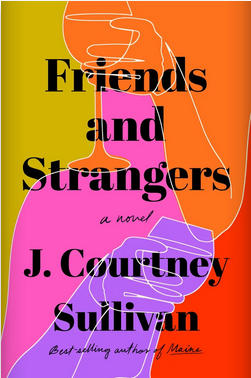 In her fifth novel, J. Courtney Sullivan successfully peels away the layers of domestic bonds, motherhood, friendship, class, and privilege. Although it’s disguised as a “small book,” lacking a big concept, I was riveted by the intimacy Sullivan presents in the lives of the two main characters, Elisabeth and Sam, and found the novel utterly absorbing.

At its heart, Friends and Strangers is an engrossing story about power dynamics within our closest relationships, especially female friendship.

Thirty-something new mom Elisabeth feels out of place in her newly adopted college town in Upstate New York, where she’s recently transplanted from Brooklyn with her husband, Andrew, and their infant son.

Small-town life is proving to be a difficult adjustment for this successful journalist who’d lived in New York for 20 years. Elisabeth struggles to connect to her new neighbors, preferring instead to exchange snarky comments with her best friend, Nomi, back in New York, and lurk on the BK Mamas — a collection of Brooklyn moms who share parenting tips and the occasional embarrassing secret — Facebook group.

“Elisabeth had once mocked women like this — women who graduated from prestigious universities and excelled in their chosen fields, only to be felled by the prospect of clipping a newborn’s fingernails.” Now, from 250 miles away, she clings to this group as a reminder of who she thinks she is.

But she is also lonely and isolated and longs for connection. When faced with a pack of young moms congregating at one end of a local park, Elisabeth considers introducing herself but talks herself out of it:

“They were grown women. They had to be nice, at least to her face. But she couldn’t do it. Some mix of self-consciousness and fatigue stopped her. That, and the fear that she wouldn’t like them anyway.”

This attitude, honed not only by her years in New York but also by her wealthy upbringing, initially defines Elisabeth’s relationship to her new surroundings. She must come to terms with her elitism if she’s going to find happiness where she is.

Things start to change when she befriends her son’s babysitter, Sam, an art and English major at the local women’s college. At first, through Sam’s eyes, Elisabeth seems to have life figured out. She’s smart, driven, and talented, and is also a successful author with two bestselling books under her belt and a third in the works. On top of that, she seems effortlessly cool and sophisticated, whereas Sam often feels awkward, unsure, and dull.

Elisabeth and Sam form an intense connection despite — or maybe, in part, because of — their different stages in life and backgrounds. But it’s only a matter of time before we start to see cracks in their relationship. After all, Sam works for Elisabeth, so their friendship is already tinged with a power dynamic that favors Elisabeth. At what point will the women see each other for who they really are? And can their friendship survive that reality check?

Sam feels like she doesn’t quite fit in at her elite school. The eldest daughter of middle-class parents struggling to afford college for their four children, she is all too aware of the examples of extreme wealth that surround her. Her affluent friends and classmates take extravagant tropical vacations for spring break and spend semesters abroad without a second thought about the additional cost.

From Sam’s perspective, they take their wealth, status, and education for granted. To help afford college, she must supplement her financial aid with part-time work in her dorm’s dining hall. It’s here where she gets to know the full-time kitchen staff, who, in turn, alert her to her own relative privilege as an educated young white woman.

Sullivan surrounds Elisabeth and Sam with a delightful, entertaining, and often moving cast of characters who bring humor, depth, and needed perspective to each woman’s story. One memorable supporting player is Elisabeth’s sister, a parasitic Instagram influencer who takes gross advantage of Elisabeth’s generosity.

Elisabeth’s father-in-law, George, who was recently forced to fold his limousine service, is obsessed with how American capitalism screws the middle and lower classes. And the women who work with Sam in the dining hall, especially young Gaby and her aunt, Maria, show Sam the uncertainty of life without a safety net.

Fans of Meg Wolitzer will be drawn to the themes of motherhood, career, and female friendship/mentorship found in books such as The Ten Year Nap or The Female Persuasion. Sure enough, Wolitzer was included in the acknowledgements and provided a blurb. And for those who admired Celeste Ng’s Little Fires Everywhere, Sullivan provides additional, nuanced perspectives on class and privilege.

Friends and Strangers is a breezy literary choice to enjoy while sitting by the pool, but it has enough heft for book clubs to sink their teeth into, too.

Sarahlyn Bruck is a community college writing professor and the author of two contemporary novels: Designer You (2018) and the forthcoming Daytime Drama (2020). She lives in Philadelphia with her husband, daughter, and cockapoo.