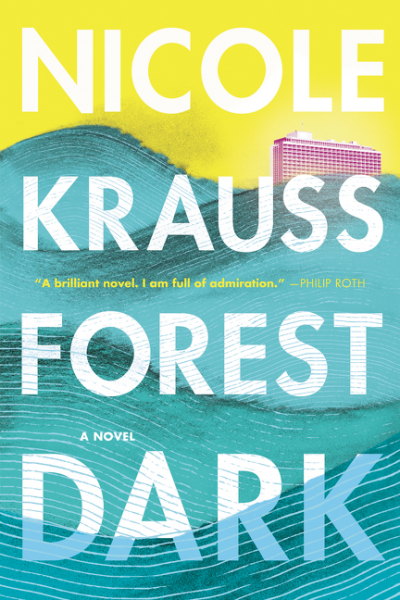 Only a handful of books that come out each year immediately signal “masterpiece.” Nicole Krauss’ Forest Dark, a brilliant effort that defines the human condition in an original way, is one of them. It is transformational, and it is about transformation. If not deeply religious (though perhaps it is), it is religiously profound.

The narrative unfolds in alternating chapters with two protagonists. One is a successful, fortyish writer whose path seems blocked. The other, nearing 70, is a successful lawyer and investor who discovers that his life’s patterns have been shaken up in a liberating way.

The transformations the characters undergo, whether sought after or suddenly realized, are described with staggering acumen and accuracy. Each conversion defines and redefines one of the central characters. The chapters that focus on the novelist — let’s call her Nicole — are told in the first person. Those given over to Jules Epstein (most often referred to as “Epstein”) are told in the third person, though the narrator has lavish access to the man’s thoughts and feelings.

Epstein’s life changes are extreme. Soon after his parents die, he ends his marriage, leaves his partnership in a law firm, and frees himself from the intimidating personality and identity he had built. He seems released into an alternate self. He smiles more, reads books on mysticism, and enters a new zone of experience characterized by a sense of lightness. He no longer believes in assurances. He wishes to be open.

His children worry about him.

Nicole comes to realize that her life has been overly structured. She is the result of confining and defining forces, including meeting other people’s expectations. She speculates about how space and time affect people’s identities and destinies. She notices her lack of drive to plan things, and she takes this suspension of will — as Epstein has taken his changes — as a kind of freedom.

A good part of the novel is played out in Israel, particularly Tel Aviv, which holds promises and challenges for both characters. It has long been part of their individual lives. The Tel Aviv Hilton looms large in Nicole’s psyche. Her ostensible reason for staying there is to base a novel on the hotel. However, while she knows that readers expect fictional characters to have reasons for what they do, she wonders if the actions of humans are truly rooted in such reasons.

Nicole is penetratingly occupied with such philosophizing. The author has the astounding ability to make her characters’ streams of interrogation and postulation as vivid and engrossing as powerful descriptions of places and actions. Her contemplations have the solidity and luster of polished stone.

Each character’s journey involves a sidekick, a kind of spiritual tour guide who often seems half-real. Epstein’s guide is Rabbi Menachem Klausner, who is in charge of researching the Davidic line, an enterprise in which the Epstein name plays a significant role. Or is he a charlatan? It’s hard to be sure. Klausner will open new vistas for Epstein by taking him to the renowned sacred city of Safed, a center for Jewish spiritualism.

Eliezer Friedman, a former literature professor, plays a role in Nicole’s journey that has similar ambiguities. He’s part mentor, part confessor, part spiritual seducer. Friedman has a strange destiny in mind for Nicole: finishing an unknown work by Franz Kafka. This goal allows the Nicole sections of the book to open up into an exploration of Kafka’s peculiar life and career. In these segments, as well, the mystique of King David, particularly his age-old role as a transcendent literary figure, haunts the narrative.

Tour-guide Friedman, rather than returning Nicole to her quarters at the Hilton, becomes — a bit forcefully — her guide to an Israel with which she is not familiar. His speech is hypnotic, somewhat like that of Rabbi Klausner, who magically flew from New York to Tel Aviv on the same plane as Epstein.

Of course, like Nicole, Epstein is staying at the Tel Aviv Hilton.

While the storylines of Epstein and Nicole never quite touch, they reflect and illuminate each other in dozens of ways. Each narrative thread of Forest Dark, if developed further in isolation, could become a praiseworthy novel. However, interfaced as they are, they generate an outcome that is far more than the sum of its parts. This structural inventiveness, coupled with the author’s soaring imagination, probing intelligence, and exquisite style, screams masterpiece.

There is even some unexpected fun in this statuesquely serious novel. The offhand references to two very different Jewish writers, Joseph Telushkin and Matti Friedman, hint at the scope of Jewish cultural experience that Krauss may expect from her readers. Or maybe she’s just having a good time with some friendly name-dropping.

This writer admits that he had a good time and more.