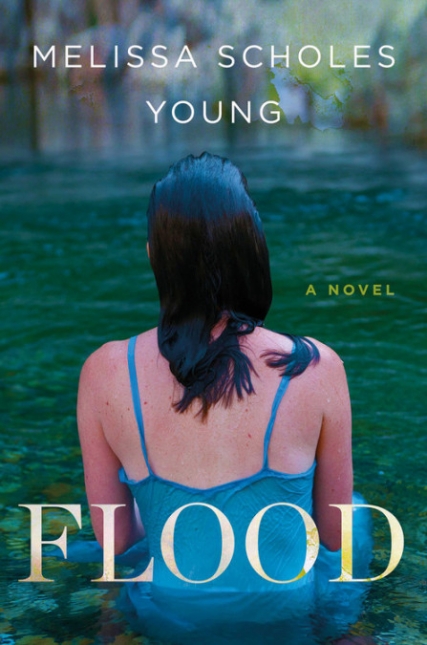 It’s been said that a novel starts either when someone leaves town or when someone arrives. In her debut novel, Flood, Melissa Scholes Young chooses the second option, bringing Laura Brooks back to her hometown of Hannibal, Missouri, 10 years after the great flood of 1993.

The book’s immediate question is thus established: Is it ever really possible to go back home?

When she arrives in Hannibal, Laura has her tail between her legs. She’s been laid off from a job in Florida, is suffering from a painful breakup, and harbors a secret. She doesn’t expect much in the way of a welcome, but everyone is downright hostile — even her mother seems unhappy that she’s back.

Laura tries to get involved again in the life of her hometown, devoted to all things Mark Twain. She tries, often in vain, to re-establish relationships torn asunder when she left. One of these involves Sammy, the source of a deep wound Laura still nurses.

An overriding concern of the locals is their annual “Tom Sawyer and Becky” contest. Bobby, the son of Laura’s best friend, is a contestant, and Laura throws herself into Bobby’s contest preparations, swept along by the Twain-infused festivities surrounding the upcoming July Fourth holiday. Looming over the fun is the mighty Mississippi, swollen by numerous thunderstorms and endless rain.

The question isn’t if the river will rise, but when.

Through this tale, Young gives us a glimpse into the present-day existence of a town made familiar by one of America’s most famous writers. In Young’s book, the characters speak in much the same dialect as Twain’s characters did. There’s lots of leavin’ and fightin’ and drivin’ going on, and lots of people saying “ain’t.”

And just like in Twain’s books, most of Hannibal’s inhabitants struggle financially. Over a hundred years later, it’s still hard to make a living in a place that offers little beyond fields that flood every year and a tourist business devoted to one famous citizen.

In a way, Flood paints a depressing portrait of middle America that could be the image of Anytown, USA. The author helps us understand why Laura wanted to leave Hannibal. Those who have left similar places will recognize this character’s solution: Seek an education, find a career that allows for escape, and move.

What’s harder to understand is her desire to come back. By the end of the story, even Laura is questioning her motives.

The Twain thread of the story is unique. The author has attempted an interesting feat, creating characters reminiscent of Twain’s work, and even people drawn from Samuel Clemens’ real life. One technique Young uses with great success is a series of chapters that purport to be excerpts from a book written by one of Laura’s teachers, Ms. Bechtold. These sections weave in and out of Laura’s story, providing historical information about Clemens and Hannibal, and dropping clues for astute readers.

We learn, for example, in one of Ms. B’s chapters, that Clemens’ first love was one Laura Hawkins, who helped him imagine the character we all know as Becky. In Flood, we also have a Laura and Sam couple who are, of course, destined to get back together.

When Laura and Sammy finally meet, he asks, “Why’d you leave? You make it sound perfect, and all you ever wanted to do was leave home. And me.” Laura lets the “me” part pass. “I don’t know how to separate Sammy from Hannibal,” she thinks. “In my mind, you can’t leave one without the other.”

Like Twain, Young does not shy away from the seedier side of life. Huck Finn’s father, Pap, was a drunk, and Laura’s brother, Trey, continues that narrative in a modern vein with different intoxicants. Other characters help us draw connections to Twain’s work. There’s Laura’s Aunt Betty, for instance, who is very much like Tom Sawyer’s Aunt Polly. There’s also a female Huck-like character in Laura’s best friend, Rose.

Like Clemens, who “had to leave Hannibal to find a place he could finally call home,” the main character in Flood found she had to leave, too. In a poignant passage where Rose and Laura finally talk about why she left home in the first place, Laura realizes, “I just didn’t want to be who I was: A poor kid from the wrong side of the tracks without a daddy. It’s hard to move forward in a town stuck in time.”

She doesn’t admit this to Rose, though. What she does reveal is, “I always wanted things to be different.” To which there is only one possible reply, and Rose delivers it: “And I always thought things were good enough.”

Before moving to Washington, DC, Raima Larter was a college chemistry professor in Indiana who secretly wrote fiction and tucked it away in drawers. Her short fiction has appeared in Gargoyle, Writers Journal, Mulberry Fork Review, and other places. She has a Ph.D. in chemistry, an MA in writing, and a short-story collection, The Gate of Heaven and Other Story Worlds.

Every Day Is for the Thief: A Novel

The narrator of Teju Cole’s latest reveals not only Nigeria’s corruption but also its unrecognized potential.