The Wisdom of Perversity: A Novel

When a high-profile sex-abuse case makes the cover of the New York Times, three adults weigh the costs of revealing what they once suffered. 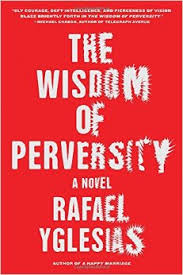 What happens when the pedophile who molested you 40 years ago appears on the front page of the New York Times, accused of the same crimes he committed against you? What if it appears he’ll get away with it again? The Wisdom of Perversity, the 10th novel from Rafael Yglesias, follows three young victims in 1966, the time of the crimes, and 40 years later when the day of reckoning arrives.

The story opens on Brian, a 50-year-old screenwriter who suppresses his sexual inclinations with medication and spends holidays in near-solitude. Flashing back 40 years, we are given cause for this behavior as Brian accompanies his friend Jeff on a tour of the NBC studios in New York, where he is molested by Jeff’s cousin, an NBC executive named Richard Klein.

Flashing forward four decades, Julie, a 52-year-old Manhattanite who works in a performing-arts archive, talks with her lawyer husband Gary about a headline-grabbing sexual abuse case involving the operator of a school that teaches drama to disadvantaged youth. Not until she sees the photo of the accused, Sam Rydel, does she recognize him as the young catamite lieutenant of Richard Klein, together the co-tormentors of her childhood abuse.

Julie telephones her cousin Jeff, with whom she hasn’t spoken in years. Jeff is now a mega-successful Hollywood director and is terrified by the prospect of his abusive childhood, and the fact that he served on the board of Rydel’s nonprofit school in its early years, coming to light.

As the past resurfaces, Julie sees her teenage son’s emerging sexuality as intolerable, and her own marriage as a sham. She walks out on her husband and meets with Brian in a Greenwich Village cafe. Then, finding herself attracted to him, she goes to his apartment where they have a sexual encounter that is a repeat of Brian playing the horrified voyeur to her abuse 40 years earlier.

Brian and Julie measure the risks and rewards of coming forward with their stories, together and with Jeff in his lavish hotel suite when he comes to New York for business. As adults, Brian, Julie, and Jeff consider the “wisdom” they have come to possess.

They each see themselves as damaged, as expressed in their sexual behaviors, their inability to trust or form to emotional attachments, and their use of pharmaceuticals to medicate their feelings and impulses. Their occupations of writing, archiving, and directing might also be seen as attempts to tame or manage the damaging effects of their pasts.

Assigning blame, passing it around, negotiating with one another, and navigating their fears as they near the moment they will go public with their stories, the redemption offered by facing their tormentors becomes questionable.

The realization of the near-inevitability of Rydel growing up to be a pedophile, and the miracle of their own degrees of decency, coupled with Klein’s dementia, which makes it impossible for him to comprehend his accusers, makes their truth-telling more for their own benefit than the serving of justice. In the end they talk not to imprison their molester, but to free themselves.

Yglesias uses flashbacks throughout the novel to slowly unfold motives and secrets that have been kept for decades, which only come out when it appears there is no alternative. His prose examines moments with a thoroughness that appears curious, and perhaps laborious. Its effectiveness is demonstrated when young Julie is molested in a room full of people, all of whom are oblivious except Brian and Jeff.

The scene switches back and forth between the points of view of the three victims, and it is physically stressful to read. The reader is not given the abbreviated version of the horror. This attention to detail in the eyes of the victims, where a few inches can make the difference between acceptable contact and sexual abuse, may represent scar tissue shared by Brian, Julie, and Jeff as they learn to assess the presence of danger.

Some readers will be uncomfortable with the subject matter, and may object in particular to Julie’s preferred sexual practice as an adult being shaped by the abuse she suffered as a child. In this reviewer’s assessment, it merely demonstrates the messy adaptations of the human psyche.

Yglesias’ characters are richly drawn. The adults charged with the safety of the victims are monstrous, self-absorbed, supremely flawed, and tenderly affectionate, none more so than Jeff’s annoying, bedridden mother, Harriet. She blackmails Klein to enhance their lifestyle and pay for Jeff’s college tuition, but never moves to bring him to justice.

Paul Mosier is the father of two adorable daughters and founder of a green investing company. He is the author of the novels Breakfast at Tuli’s, Story Girl, the forthcoming Genre, and Train I Ride. With what’s left of his time, he reads submissions for Four Chambers Press.