First & Wildest: The Gila Wilderness at 100

Pondering the past and future of a New Mexico treasure. 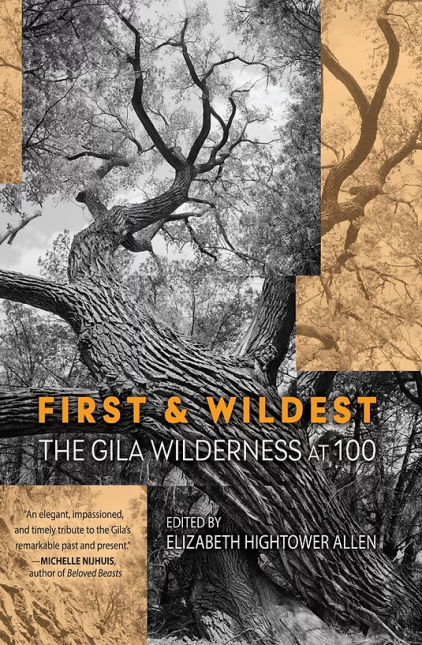 Dry lightning sizzled over New Mexico’s Black Range when Aldo Leopold reached the Gila National Forest in 1922. The smell of burning trees must have reminded him of a federal forester’s chief duty: protecting ponderosa pine and other valuable timber. Yet even as he saddled up to organize fire crews, Leopold kept a bold new idea in mind.

First & Wildest: The Gila Wilderness at 100 is a rich literary tribute to that idea’s fruition, the designation of 755,000 acres of mountains, canyons, deserts, creeks, and arroyos as permanent wilderness on June 3, 1924.

As editor Elizabeth Hightower Allen explains, the anthology aims to celebrate that first wilderness — in the nation and the world — and also the protection of 111 million more acres that the Gila Wilderness inspired. Additionally, First & Wildest is a challenge to a century-old concept, a multi-voiced call for a reinvigorated and reimagined wilderness ethic in an era of social and biological crises.

Grizzly still roamed the Gila in Leopold’s time, and he could see past cattle-driven erosion to a “semi-virgin” roadless landscape where primitive recreation could be the highest use. The collection’s more traditional pieces often focus on rugged outdoor adventures, featuring lost trails, heavy backpacks, crackling campfires, and one narrow escape from a conflagration by helicopter.

Sharman Apt Russell’s explorations are especially sensuous. With Russell as your guide, you can smell the juniper, hear a Gila owl, and wince from the locust thorns. The vast and often forbidding Gila is tough to know well, but such intimate inspection invites readers to say, with the writer, “Hello, aren’t you beautiful.”

The urgency behind wilderness protection, said Leopold, is that “it will be easier and cheaper to preserve…than to create it after it is gone.” But keeping the Gila has never been easy. In 1931, a road sliced the wilderness in two. Another chunk was lopped off in 1944 for a fluorite mine, and several writers in this collection lament assaults and degradations of Gila land, water, wildlife, and quietude.

Drought and fire, exacerbated by climate change, are recurrent themes, poignantly mourned and universalized in Phillip Connor’s contribution. As he writes, “Scorched earth was now the ground we inhabited in the American West.”

The most persistent threat to the Gila comes from dam proponents. Environmental reporter Laura Paskus dramatizes battles since the 1960s to claim drinking water and hydropower at the cost of wilderness. In “Wild Love,” she introduces post-Leopold defenders of the Gila such as the late Dutch Salmon, who launched his activism by paddling 200 miles down the river. No matter how greedy, shortsighted, or counterfactual he found dam advocates, Dutch never lost heart. As Paskus writes, “It’s clear that the ugliness of their need, of their words, of their hate was never a match for love.”

“The next hundred years of the Gila,” Vasquez insists, “should be just as much about people as about conserving water, wildlife, and landscapes.”

A state game and fish department project, however, may belie the benevolence of wilderness restoration. Biologist Leeanna Torres recounts the first steps in Gila trout recovery: hauling buckets of antimycin into Raw Meat Canyon, plunging them into the West Fork, and waiting for non-native fish to die. Torres reflects that “there is nothing romantic about restoration,” but does not dive deeper into the ethical perplexities of her work. Readers pondering how much manipulation or even violence is compatible with wilderness will want to read more trenchant volumes, such as Laura J. Martin’s recent Wild by Design: The Rise of Ecological Restoration.

With contributors ranging from novelists to politicians, First & Wildest is more insightful than incisive. Perhaps the most thought-provoking essay challenges the dominant culture’s right to proclaim a wilderness on the Gila at all. “This is Apache land,” declares Joe Saenz, a council member of the Chiricahua Apache Nation. It was stolen through deception, war, and genocide, but “we still retain 100 percent of the spiritual ownership of this land.” To the Apache, the Gila was never semi-virgin wilderness; it was home.

How can a wilderness honor the sacred values of original inhabitants or assure equitable access to everyone in need of outdoor experiences? In an era of climate disruptions, is it even possible to conceive of permanent land protection? First & Wildest is less about solutions than about perspectives, looking back at struggles and forward in hopes of a thriving Gila in its second century. It is engaging and purposeful reading for anyone cognizant of the value of a blank spot on the map.

Julie Dunlap writes and teaches about wildlife ecology, environmental history, and climate change. Her new children’s book is I Begin with Spring: The Life and Seasons of Henry David Thoreau (Tilbury House, March 2022).

Why Religion? A Personal Story

An entertaining posthumous collection of writings from the witty, acerbic Brit.