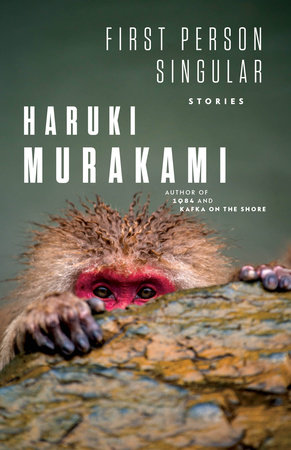 I have dipped but a figurative toe in the comprehensive ocean of Haruki Murakami’s literary œuvre, a body of work that spans four decades and includes 14 novels and oodles of stories. Nonetheless, my sense is that First Person Singular is not only the title of this story collection; it appears also to be his point of view of choice throughout both his short and long fiction. The voice of his hapless Everyman — often young, awkward, and adrift within Murakami’s signature surrealist universe — is a steady narrative presence.

Murakami’s first translated novel to be distributed in the U.S., A Wild Sheep Chase, hit our shores in 1989. But perhaps an even bigger boost to his international career came soon after, in 1990, with the publication of his first short story in the New Yorker, “TV People.” That one has been followed by roughly 30 more over the ensuing years; his three most recent show up in this slender, eight-story collection.

David Karashima, a later Murakami translator and author of Who We’re Reading When We’re Reading Murakami, notes that, to get that first Murakami story into the New Yorker, it was translated by Alfred Birnbaum (who had done Murakami’s initial English translations), then edited by his first longtime editor, Elmer Luke, and then edited again by New Yorker fiction editor Linda Asher — neatly illustrating who all we’re reading when we’re reading just one Murakami story.

Few of the author’s stories, long or short, are without a measure of magical realism, but in an unremarkable way, at least in the eyes of his narrators. In “Confessions of a Shinagawa Monkey,” the narrator spends an evening talking and drinking with a monkey who serves as a bathhouse attendant at an old inn.

Arguably, this man devotes more time than do most Murakami protagonists to ruminating on the craziness of the situations the author throws at them, but while he’s surprised and curious that the monkey can talk, he’s not unduly flustered by it. It’s simply unexpected.

The monkey, raised by humans and thus a perpetual outsider with both humans and apes, is attracted to women — who are, of course for him, unattainable. So he steals their names instead, possessing and treasuring them while leaving the unwitting women unable at times to recall their own names. This talent, too, is unexpected but taken at face value.

The narrator does wonder whether he has imagined the monkey, or, if he was real, whether he was lying about this ability to steal names. Later, when an attractive friend of the narrator’s admits to sometimes forgetting her own name, he is disappointed. “Was the Shinagawa monkey back to his old tricks?”

Interestingly, this iteration is Murakami’s second run at telling this tale. “A Shinagawa Monkey,” which ran in the New Yorker in 2006, is told in third person from the point of view of a woman who suddenly has trouble remembering her name. The later version is tighter, more intimate, and more affecting. So perhaps Murakami is right to cleave to his preferred first-person singular, male perspective.

The other thing his male narrators consistently have in common is their interest and taste in music — always classical and jazz. The Shinagawa monkey and his drinking pal share a fondness for Bruckner. In “Charlie Parker Plays Bossa Nova,” the narrator stumbles upon a copy of the title record, which only ever existed in a fake review that he wrote in college. In “With the Beatles,” the Fab Four’s U.K. debut album plays a part in forming the protagonist’s ideal of what to listen for when he meets a new girl, but his heart belongs to jazz and classical.

In “Carnaval,” the narrator and a friend of his, “indeed the ugliest” woman he has ever known, share a love of classical music in general and of a single composition in particular, Schumann’s quirky piano piece of the title. The woman observes that the composition speaks to the masks worn by the revelers, but also to their true faces underneath, whether that’s an angel or a devil.

The narrator wonders whether she is speaking of her inner beauty masked by an ugly face but needs to reconsider when she and her husband — “a gorgeous man, almost unreal in his attractiveness” — are arrested for an investment scheme that robs innocent victims of their life savings.

So much remains undecided in Murakami stories; rarely is there a definitive conclusion, and his narrators typically aren’t sure what to make of the stories they relate. “Cream” is one big unanswered riddle: Why did the young narrator receive a formally printed invitation to a piano recital from a girl at school he barely knew, and why was the concert hall he went to — at the appointed date and time, far out in a remote suburb — obviously deserted, even abandoned?

Further, what did that old man mean when he said that the ability to visualize a circle with infinite centers and no circumference opens up the best — the cream — of life? Telling this story to a buddy years later, the narrator still has no idea.

Herbert Mitgang, in reviewing an earlier collection of Murakami stories for the New York Times, commented, “Nearly all the short stories in The Elephant Vanishes are fun to read, but Mr. Murakami seems better as a long-distance runner in fiction.” Using only one-and-a-half Murakami novels and a dozen short stories as my gauge, I’m inclined to agree.