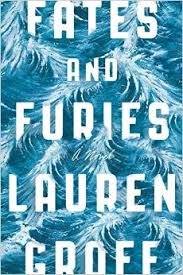 Lauren Groff’s new novel, Fates and Furies, lifts the lid on a marriage and has a good look at the stew. Lancelot (Lotto for short) and Mathilde wed at age 22; their love ignites on page one and remains ablaze throughout.

Here they are in the dunes beyond a friend’s house in Maine, having just tied the knot: “In a vision, [Lotto] saw the sea rising up to suck them in, tonguing off their flesh and rolling their bones over its coral molars in the deep. If she were beside him, he thought, he would float out singing.” Groff’s earlier work has proven her a writer of tremendous technical prowess. Her prose crackles with energy and fervor in this book, as well.

Born on a plantation “in the humid stink of central Florida,” Lotto is made fatherless at the end of seventh grade by his dad’s heart attack. Soon after, he’s heading for trouble, hanging out at the beach with the wrong crowd.

To save him from himself, Lotto’s mother speeds him to boarding school in the cold and arid north, where Lotto is hideously lonely (his mother doesn’t let him come home) until he discovers his inner actor, and his appetite for girls, which, although insatiable, is also irresistible to the opposite sex. Then on to Vassar, where he meets Mathilde in a coup de foudre and swears eternal fealty. Ultimately, the Florida crowd follows Lotto, with consequences.

In theory, Lotto is heir to his parents’ bottled-water fortune, but despite keeping up with other members of his family, his relationship with his mother never recovers from the tough love she administered in high school. Lotto and Mathilde are impoverished by her condemnation of their marriage. Called Antoinette, Lotto’s mother grows fatter and more sedentary throughout the novel, her absence looming and ever-present.

Groff pays homage to earlier storytellers, not just the Greeks, whose mythology weaves throughout the narrative, and Shakespeare (ditto), but also to Mary McCarthy, whose The Group similarly follows the ups and downs over a lifetime of a clique formed in college.

And are those echoes of Molly Bloom on the last page? “Yes, she would have said. Sure.”

The DNA for Groff’s latest novel is in its title. The first half, called "Fates," is told primarily from Lotto’s perspective, tracing his life from a less-than-successful actor to a more-than-successful playwright, thanks to his muse, Mathilde. [Stage directions of a sort are given throughout the novel, within brackets like these.]

The couple’s vividly rendered, steamy encounters pepper the book with great frequency, along with repeated reminders about their appearance. Mathilde is tall and rakishly thin, though not quite pretty, and Lotto is tall and slightly odd looking, his hair mussed, his skin pockmarked by raging teenage acne.

The muse and the steaminess recall Mary Gordon’s Spending, but things veer off dramatically in the latter half of Groff’s novel, upending assumptions about what might have been fated.

Titled "Furies," the second part of the book offers Mathilde’s perspective. Her name apparently means “strength in battle.” It turns out she’s far more complicated than a woman who unthinkingly stands by her man. With a nuanced inner life, she has a surprising and gripping past. I couldn’t help wondering whether Groff was giving the slightest nod to Roald Dahl’s eponymous heroine.

Fates and Furies raises an array of vexing questions: Is there an honorable way to claw one’s way out of poverty? What is the meaning of trust? Should marriage supersede family? What role has art, and who deserves credit as its progenitor? If humans are both good and evil, how can we activate our better angels? Groff delivers piercing observations on these and other subjects.

Lotto and Mathilde are unquestionably the “beautiful people” of their set. As opposed to Bit, the endearing protagonist in Groff’s earlier Arcadia, this pair is not particularly likable. But that’s not the point.

Groff’s skill is in spinning an entire novel around Lotto and Mathilde’s insular relationship. She explores the personal damage each brings to the marriage, and suggests the sum is not only greater, but perhaps better, than the parts. Lotto and Mathilde’s marriage is the real protagonist in Fates and Furies, a subject the author not only captures, but masters.

Martha Anne Toll’s essays have appeared on NPR and in the Millions, Narrative Magazine, Tin House blog, The Nervous Breakdown, and Heck Magazine (forthcoming). Her fiction has appeared in Yale's Letters Journal, Inkapture Magazine, Poetica Magazine, Referential Magazine, and Wild: A Quarterly. Martha directs a social-justice foundation focused on preventing and ending homelessness and on criminal-justice reform. Follow her on Twitter at @marthaannetoll.

The Invention of Wings

Haunted by slavery, two unforgettable American women form a complex relationship as each strives to make a life of her own in this lyrical and edifying tale.