Kidnapped and taken to North Korea, a witty, surly adoptee tugs at her roots. 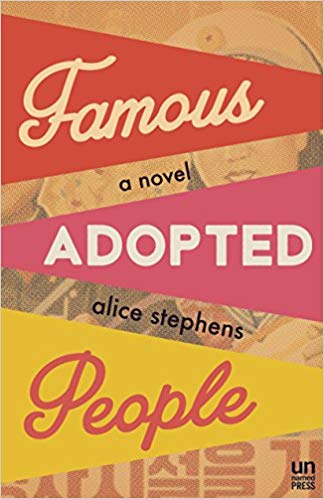 Even the most casual observer of North Korea can sketch out double-crossing, intrigue, and the deeply survivalist nature of its politics. Alice Stephens’ debut novel, Famous Adopted People, harnesses these characteristics into a darkly comedic game of cat and mouse.

At the center of this suspenseful story is Korean-American adoptee Lisa Pearl, who, as an adult, is abducted and taken to North Korea. She serves as both predator and prey while searching for a way out.

Lisa begins her journey to find her biological mother by moodily slouching into a Seoul donut shop while recovering from a drug bender. She’s concerned about being forced to flee an English-teaching job in Japan, where her employers have discovered love letters between her and a high-school student.

However, her worries aren’t so much about the fact that the allegations will ruin her reputation, but with the journals containing her novel manuscript that she might lose in the moving-out process.

Lisa’s dubious priorities and fledgling writing career are established as the two central components of her character. Aside from her flippancy toward statutory rape, she tries the patience of best friend and fellow adoptee Mindy in both the present-day and in the many flashbacks set in Seoul.

In the present-day, right before a North Korean operative kidnaps her, Lisa acknowledges that, “If it weren’t for Mindy" she "would’ve been dead a long time ago.” She then proceeds to call Mindy “a little drama queen who hasn’t had enough heartbreak,” ridiculing her friend for being emotionally invested in searching for her own biological mother.

Stephens’ cleverest framing is established by the title of the novel and its chapter headings. Each chapter opens with a quote from adopted celebrities — from Moses to Faith Hill — who are then discussed by the characters. Through these individuals and their stories, Lisa attempts to piece together ideas for her aspirational writing career.

On a conceptual level, Lisa’s writing project allows Stephens (herself a transracial adoptee) to weave her protagonist’s struggle building a career into the meandering and frustrating process of building an identity as an adoptee. Lisa’s need to find a cultural place for herself powers the story.

The abducted Lisa ends up in a North Korean compound where her biological mother holds court. As it turns out, Lisa was born to a white American woman named Honey, who undergoes plastic-surgery procedures the way another person might cycle through lipstick or eyeshadow.

Honey is a North Korean operative. She presides as something of an empress dowager over a fortress packed with shady characters who delight in playing brutal pranks on one another, using an arsenal of psychiatric drugs and surveillance technology. Within this environment, the tables are turned on Lisa, who becomes helpless and meandering without anyone to properly bully.

Aside from Honey, the other biological relative Lisa meets is a loud, brassy caricature of a young Kim Jong-un, who peppers his speech with English slang and initially doesn’t resemble the current authoritarian leader. Called “Jonny” by Honey, he has been surgically altered to hide his half-Korean features so that he could be raised by Kim Jong-il’s wife.

Stephens’ take on Kim Jong-un is rich in bombast and flashiness but keenly aware of what drives a person raised in the amoral system of North Korea’s political regime and by someone with Honey’s extreme pragmatism.

Jonny is at once a comedic presence and wary of the world that he and Lisa were hand-selected for and placed into. On an unbeknownst-to-their-mother day trip out of the fortress, he reflects somberly:

“You and I are as close to each other as lips and teeth, Lisa. You know, I too was raised by a woman who was not my mother…But I see that it has also made you strong because you only have yourself to rely on. It’s you against the world. They’ve taken away your mother, and nothing that happens after that will hurt you as much. It either destroys you, or makes you invincible.”

How Stephens characterizes the relationship between Jonny, Honey, and Lisa aptly contextualizes the often-troubled logical system that Lisa ascribes to and provides a unique way for the author to frankly discuss her protagonist’s belligerent view on life.

Lengthy portions of the story set in North Korea present the reader with something like a set of endless bureaucratic instructions with no clear objectives. Though Lisa is guided through repetitive motions to dress, take dubious medicines, and go through mandatory activities, the novel moves at such a quick pace that novices to political thrillers and suspense will struggle to keep up.

Stephens’ rapid-fire dialogue almost physically propels the characters forward but doesn’t leave enough space for the consequences of their decisions to jell properly. Lisa herself is presented as a protagonist with significant baggage and few scruples. But given the moral questions that are asked by setting the story in North Korea, her personal choices need to carry more weight.

Instead, other characters take the reins as Lisa sits back and observes, awkwardly placed into such scenes almost as a third wheel.

Toxic relationships and the development of an intercontinental nuclear-tipped missile simmer in the background of Famous Adopted People, unsettling the characters who choose to peer past what is being fed to them on the surface.

While Famous Adopted People is sharply clever and wields family dynamics in a way that impressively shakes up its seemingly unflappable protagonist, I found myself getting lost a little too often alongside Lisa, wandering through its labyrinthine spy-fortress setting without aim.

Rui Zhong researches, analyzes, and writes about U.S.-China relations and Asian cultural topics and trends. Her work has appeared in Foreign Policy Magazine and the Los Angeles Review of Books China Channel.