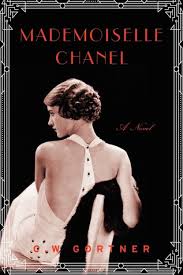 Her look and her legacy seem to have the uncanny ability to transcend time. She is everywhere: in the little black dress, and the No. 5 perfume; in the sailor-striped T-shirt, wide-legged trousers, layers of pearls, and boucle suits with pencil skirts. Even now, in the androgynous look found on runway models and the casual, chic, je ne sais quoi (I just got out of bed but still look stunning) image trending in fashion magazines and blogs, Coco Chanel is everywhere.

This is a difficult question to answer, and numerous attempts have been made. In the past five years alone, several biographies and biopics have been released. C.W. Gortner, a well-loved author of historical fiction, brings us the latest attempt to understand the elusive Coco in his novel Mademoiselle Chanel.

What Gortner brings to this task, aside from being a seasoned novelist who writes about the past, is his training in design and experience in the fashion industry. This is a well-researched book that clearly delineates the life of Gabrielle (Coco) Chanel — the rags-to-riches story of a girl born into peasantry in rural France just before the turn of the last century.

Orphaned and unloved as a child, she managed to create an extraordinary life for herself through sheer determination and hard work. For those not familiar with her story but not particularly drawn to biography, Gortner’s retelling of her life might be a good place to start.

In a compelling narrative that carefully places Chanel in historical context, a portrait emerges of a woman who knew how to use her talent with a needle and thread — learned from her mother and cultivated by the nuns in the convent where she spent much of her youth — as a tool to pave the daring path she chose, one which led her from seamstress to fashion icon to creator of the “modern” woman.

The Chanel of Gortner’s story builds an empire in a man’s world against the backdrop of two World Wars and manages to make it look effortless. She shocks, intimidates, and works her fingers to the bone, all the while suffering emotionally from the two major tragedies of her life: her father’s abandonment and her one true love’s death.

And this emotional turmoil is what this novel is really trying to capture, because many already know the basic story of Coco Chanel’s life. It is the woman, the person, who we can’t seem to pin down.

Like her “little black dress,” Chanel herself was more complicated than she let on: The simplicity of the silhouette suggests austerity and freedom at the same time — both of which Coco admired and possessed. Yet, how does one reconcile the two?

Gortner’s novel helps us see that to understand Chanel is to understand her attitude toward clothes — thus her vision for women. For Chanel, clothes were not costumes meant for make-believe. What women wore should be beautiful and elegant, but also functional. Women needed to breathe and move and contribute to life as individuals.

Mademoiselle Chanel also brings to light the central and quite sad thing about Coco: Despite her professional achievement, despite her vitality and curiosity, she seemed incapable of finding happiness. At the height of her fame, the true joy and inner peace that she desired, that filled her dream life, eluded her. Instead, she took what she could get — work, lovers, pills — and became dependent on them.

What historical fiction offers is a chance for the imagination to fill in the gaps of the real story, for a voice to emerge, and a life to come alive on the page. My own imagined voice of Coco Chanel — strange, searching, sassy, something heady and nuanced, something like the woman herself — is not found here.

Chanel took risks, and despite Gortner’s one novelistic risk of writing historical fiction in first-person, this story doesn’t echo the stylistic chances its subject took. However, readers of conventional historical fiction will not be disappointed in the straight-forwardness of this tale, and the well-crafted descriptions throughout that bring the book to life.

For example, just after taking her most dangerous lover to bed, Gortner describes Chanel looking out the window: “My shop across the way stood shuttered, the brisk night wind biting into the white awning over the doorway. I watched the awning flutter, the bold black letters spelling my name folding upon themselves and blurring, becoming indecipherable, much like the world around me.”

Mademoiselle Chanel is a thorough and thoughtful look at the extraordinary life of a woman whose utter disdain for the corset transformed not only the fashion industry, but also the mindset of an era, whose trampled-on spirit was difficult to crush, and whose story, though very real, floats outside of time like a fairytale.

Holly Sneeringer earned an MFA from Goucher College, and has taught writing at the University of Maryland, Baltimore County (UMBC) and Towson University. Her work has appeared in various places, including the St. Ann’s Review, the Gettysburg Review, and the Los Angeles Review. In 2013, she was the recipient of the A Room of Her Own Foundation’s Orlando Award. She is a fiction editor for the Baltimore Review.