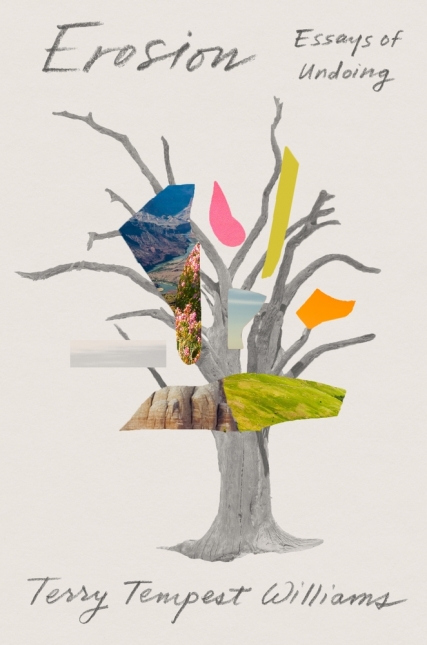 If you’re reading Terry Tempest Williams for the first time, you are meeting an impassioned conservationist who can take her place in the environmental pantheon alongside Rachel Carson, Henry David Thoreau, John Muir, and Rebecca Solnit.

Erosion: Essays of Undoing is her 16th book and, in it, Williams writes of how the world is splintering and crumbling because of those who plunder public lands for oil, gas, and other fossil fuels.

Williams is particularly inflamed about what has happened to two national monuments in her home state of Utah: Bears Ears (1.3 million acres) and Grand Staircase-Escalante (1 million acres). Both had been designated as national monuments by President Obama and thus permanently protected, but months after Donald J. Trump took office, he ordered an 85-percent reduction in federal protections, which opened both areas to private development. She writes:

“The fury to strategically undo decades of environmental regulations and laws passed on behalf of ecological integrity and human health has been unleashed inside the Department of Interior and the Environmental Protection Agency.”

Believing the life of the planet is now at stake, Williams marshals dazzling prose to summon activists to resist and revolt. She believes “to belong to a place and a group of people saves our lives,” and that each of us must fight for salvation, which means waging war against all disrupters of public lands.

From 1987-1992, she engaged in acts of civil disobedience to protest against nuclear testing in the Nevada desert. More recently, she and her husband formed a legal entity to purchase a gas-and-oil lease from the Bureau of Land Management for 1,120 acres near their home in order to keep the resources in the ground forever:

“Our purchase was more or less spontaneous, done with a coyote’s grin, to shine a light on the auctioning away of America’s public lands to extract the very fossil fuels that are warming our planet and pushing us toward climate disaster.”

Their clever ruse made front-page news in the Salt Lake Tribune, and, two weeks later, Williams lost her job at the University of Utah as the Annie Clark Tanner Scholar in the environmental humanities graduate program.

Professionally crushed by the fossil-fuel interests in her state, she excoriates fellow Utahan Orrin Hatch, the longest-serving Republican U.S. Senator in history and one who, for 42 years, championed drilling in his state’s public lands. After reading her case against the 85-year-old politician, one may be relieved to know that he’s now retired.

Williams’ zealotry is understandable considering that atomic testing in Nevada between 1951 and 1962 exposed her and her family to radiation, which, she believes, is the reason so many of them have developed cancer. Nine family members have had to have mastectomies, which prompted her to write an essay in 1991 entitled “The Clan of One-Breasted Women.”

Erosion is not a book you drink in one gulp; you take a few sips and savor the skill of a talented writer who fuses soul to scholarship. For some, the essays will be a conservationist’s creed with too much information about red-winged blackbirds and sand bill cranes, while others will be impressed by the depth and detail of the author’s avian expertise.

I confess a raised eyebrow when I read that “the sage grouse is the most powerful individual in the American west right now,” but after reading page after page about this bird with a spikey fan and golf-ball-size eyes, I found myself rooting for a feathered creature I’d never heard of before.

Williams extols the natural beauty of the Colorado Plateau and the red-rock wilderness of the Four Corners Monument, the quadripoint that connects Arizona, Colorado, New Mexico, and Utah. She pays homage to the Endangered Species Act and schools you in all its dimensions — geological, geographical, and geopolitical. Then she swerves into her personal life and the effects of "erosion" on her evolution into a fierce feminist.

Raised a Mormon in Salt Lake City, Williams rails against that church and its beliefs that proclaim African Americans are not worthy to become priests and indigenous people are Lamanites, cursed and cut off from the Lord. She states that the greatest trauma of living in Utah is “the religiosity of the Mormon patriarchy that says you have no authority to speak — women, Indians, black people, brown people. Gay people, trans people.”

The heart-stopping moment of the book comes toward the end in a searing chapter she entitles “The Erosion of the Body,” which Williams means literally as she recalls her brother’s inability to conquer his addictions and his subsequent suicide.

Sparing no details, she gives us the tick-tock of how he hanged himself, and how she and her surviving brother identified his body, placed sunflower petals on the raw sores of his neck, and then slipped a red-tail hawk feather in one dead hand and an owl feather in the other. She leads us to the crematorium, where she and her younger brother sit for six hours in front of the furnace that burns their brother’s remains.

They never flinch, even when the coroner comes to turn the corpse as one might turn a quesadilla. Waiting for his ashes, which will be released into the wilderness, Williams recalls how, shortly before he took his life, he had told her, “I am eroding.”

At that point, the title of this book, dedicated to her dead brother, takes on its deepest dimension.