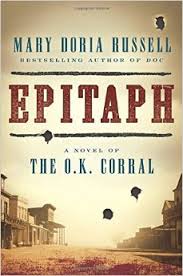 On a late October afternoon in 1881, nine men unleashed their fear, frustration, rage, and fatigue in a hail of bullets next to Fly’s Photography Studio. Three men died in those 30 seconds of violence, but the real bloodshed was yet to come.

The shootout at the O.K. Corral, as it came to be known (the narrow abandoned lot next door did not lend itself easily to a name), spawned legend and rumor almost as quickly as the bodies fell. As the survivors aged and tried to gain fame, fortune, or vindication through selling their stories, memory’s own gun smoke further obfuscated that half-minute in history.

By the time Western shoot-out movies captivated 20th-century American audiences, a white-washed, romantic myth replaced the complicated lives that pivoted in Arizona that day. Mary Doria Russell has set out to find the truth about what happened between the Earp, Clanton, and McLaury brothers and their respective friends, but the truth, of course, was gone.

Faulty memories, self-serving narratives, and the consuming maw of time made sure of that. Consequently, Russell chose the same weapon myth-makers do: story. Her novel Epitaph digs into the political and personal pressures driving those nine men, their friends, enemies, and lovers during the year before the shoot-out and for a half-century after.

The Earp brothers (James, Virgil, Wyatt, and Morgan) have, by 1881, all converged on the booming silver mining town of Tombstone. They persuade John Henry Holliday, known as Doc for his degree in dentistry, to stay, too. There he can ease his wretched tuberculosis-ridden lungs while earning a bit of cash off the town’s rich gambling tables.

The Earps have also brought their women with them, although in Wyatt’s case he wishes he had not. Obstreperous, opium-addicted Mattie Blaylock is so deeply mired in her bitter insecurity that she can do nothing but harangue him. When the newly-arrived Josephine Sarah Marcus sets her sights on him, Wyatt is tempted, but he must resist. Especially since Josie is ostensibly — but not actually — married to Johnny Behan, a loquacious politician with ambitions of forging a local bipartisan coalition.

Behan’s task is as daunting in 1881 as it would be in 2015. The wounds of the Civil War still fester, pitting city-dwelling law-and-order Republicans against countryside stay-off-my-rights Democrats, while the Federal government is hamstrung in its ability to provide security in the Wild West. And though Behan’s political goal may be lofty, his means are sordid. His machinations to earn political office for himself while manipulating the guileless Wyatt end up creating much of the animosity that drives the novel.

Meanwhile, the outlaw Cow Boys rustle Mexican cattle from south of the border and then fence them in Arizona with complicit or cowed ranchers like the McLaury brothers. The Cow Boys grow bolder in their criminal exploits while corrupt politicians look the other way, leaving a few like Deputy U.S. Marshal Virgil Earp and his sometimes lawmen brothers, Wyatt and Morgan, to enforce the law.

It’s a complicated set-up, and Russell doesn’t pull any punches. She leads her readers through a viper’s nest of political ambition, jealous relationships, and unbridled greed, sweetened occasionally by the glow of loyalty and love.

The dog-eat-dog world is evident: “At least eighty professional gamblers had converged on Tombstone in its first year: wolves drawn to a herd of highly skilled hard-rock miners who got paid a stunning four dollars a day…Competition was fierce among those who wished to feast on their wages.”

The vast scope is tough going at first, as Russell delves into the minds of well over 20 characters. She moves with skill among the thoughts of nearly every character, who walks Tombstone’s streets, but such skill cannot compensate for the lack of grounding the head-hopping creates. It’s hard to know with whom to sympathize when every character has a say.

Slowly, however, the story coalesces. Like a stagecoach gaining speed, the tale is off at a full tilt by the time the bullets start flying. This does take nearly half of the almost 600-page book, but the cumulative effect is well worth the investment. The grief that ultimately defines Wyatt requires a deep and subtle sympathy to understand, and Russell provides that with artful delicacy.

This book might not inspire the love that Russell’s previous novel, Doc, did, in part because the scope here is wider than a simple re-examination of the misunderstood Doc Holliday. There are more characters, more perspectives, and more historical digressions in Epitaph.

A greater deference to the goddess of story rather than the devil of history might have served Russell well, but ultimately it’s hard to argue with a book that page after page proves its own epigraph. From Paul Ricoeur: “Beneath history, memory and forgetting. Beneath memory and forgetting, life.” Wyatt Earp could ask for no better epitaph and no more deserving memorial than this rich, complicated novel.