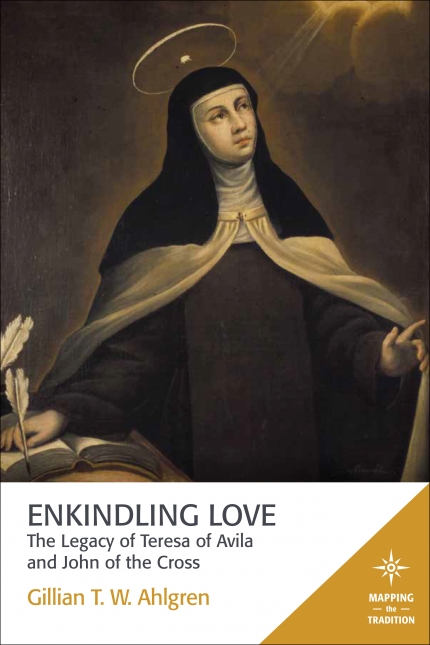 Gillian T.W. Ahlgren, professor of theology at Xavier University, is one of the most highly respected authorities on mysticism in the country. Yet her new book, Enkindling Love, is not a scholarly treatise. It is a practical guide to the writings of Saint Teresa of Avila (1515-1582) and Saint John of the Cross (1542-1591), two of Spain’s most dynamic early modern spiritual reformers, and it is written for laypeople.

In recent years, Teresa and John have captured the public imagination because of their emphasis on interiority, meditation, and one’s personal relationship with God. Although Teresa and John were orthodox Catholics, their focus on the personal experience of God rather than the rituals of the Church appeals to many modern spiritual seekers disillusioned with traditional religions.

Teresa appeals especially to feminists, who see her as an independent spirit willing to stand up to Church authorities aiming to silence women. While John has attracted less public attention, he has earned a following among those who see his portrayal of “the dark night of the soul” as a reflection of their own spiritual struggles.

The 16th-century nun Teresa de Jesús, known in the English-speaking world as Teresa of Avila, was the daughter and granddaughter of Jewish merchants who converted to Catholicism due to social and political pressures. After her mother died, Teresa’s father placed her in a convent to be educated.

Although she did not intend to become a nun, under the guidance of the novice mistress, she decided to take the habit. She entered the overcrowded, hierarchical, and cliquish Carmelite convent of Incarnation, in Avila, where no time was allotted for mental prayer. Around 1553, Teresa began to experience mystical ecstasies, which some of her spiritual directors attributed to the devil. After a period of interior struggle, Teresa launched a reform movement, founding a new kind of convent where women could lead authentically spiritual lives.

Teresa realized that she would need friars as well as nuns, not only because men would confer gravitas on her undertaking, but also because the nuns would need confessors. At her second foundation in Medina, she met John of the Cross, a young priest who was deeply attracted to the more primitive, authentic kind of Christianity that Teresa was advocating. John soon became her ally and the founder of the first discalced Carmelite friary.

Ahlgren offers in-depth theological analyses of the writings of these two giants of Spanish mysticism, but she does so in a way which allows them to speak for themselves. Her book consists of extracts from Teresa’s best structured treatise, The Interior Castle, and some of John’s most exquisite poems and their prose commentaries. Each segment is preceded by Ahlgren’s sensitive, thoughtful exploration of the text and its applications to everyday life. In addition, the author provides a perceptive general introduction and conclusion.

Although Teresa wrote her four treatises at the behest of spiritual directors, Ahlgren argues that she was nevertheless fully engaged in their creation. Writing, for Teresa, was not merely an act of obedience, says Algren. Both she and John “wrote primarily to help others.” They wrote “because they were…afire with a love that wanted to burn its way into the hearts of people.” They thought that not to write “would be an act of disdain, ingratitude, and utter infidelity to the invitation of their Beloved to share generously the love that they themselves had been graced and privileged to receive.”

Ahlgren directs her explanations to believers, but she makes Teresa’s words accessible to a broad audience. The Interior Castle posits an interior journey into the soul. Imagining the soul to be “like a castle made entirely out of a diamond or very clear crystal, in which there are many rooms,” Teresa describes movement through seven concentric circles. The outermost circle is filled with obstacles and dangers (distractions, sinfulness), but as one moves toward the center, the process becomes easier until at last one reaches the innermost circle, where God resides.

For Ahlgren, the journey begins with self-awareness, consciousness of a “relational reality” between the individual soul, beautiful and full of potential but susceptible to temptation, and the mystery beyond. As we grow in self-knowledge, we are better able to recognize pitfalls and to make wiser life choices.

By the third dwelling place, we are in “a space of greater mindfulness, intentionality and personal integration, characterized by greater moral integrity and a growing consistency and predictability as a human being.” The seventh dwelling place signifies the union between God and the soul; it is a place of complete personal and relational integration, which leads to generosity of spirit and love for others.

John’s poetry reflects a progression of intensity in the love that God and the soul share. Like Teresa’s, John’s writing is most coherent when viewed in Christological terms, yet can be understood in a broader framework. For Ahlgren, The Ascent of Mount Carmel, John’s commentary on his poem, “The Dark Night,” describes the “developmental stages” that “revolve around moral behavior and spiritual discipline.” John explores ways in which the descent into the inner darkness open up new dimensions in self-knowledge. By confronting our inner pain, essential to the purgative process through which we recognize our own failings, we grow in spirit and are liberated and transformed.

For Ahlgren, these are not abstractions. She believes that Teresa and John were both “deeply concerned about the kind of person one becomes, through relationship with God.” The process they describe is “an invitation to us to be active partners in the work of bringing new life to the human community.” It makes us more alive and creative, more able to effect personal and social transformation.

In addition to teaching and writing, Gillian Ahlgren works with women suffering from domestic violence and addiction. Her belief in the transforming power of God’s love, honed from years of counseling, shines through these pages, imbuing them with humanity and truth.

Bárbara Mujica is a professor of Spanish literature at Georgetown University, where she teaches courses on Teresa of Avila and John of the Cross. She has written two scholarly books on Teresa, Teresa de Avila, Lettered Woman and Espiritualidad y feminismo: Santa Teresa de Jesús, as well as scores of articles. Mujica is also a novelist, short-story writer, and essayist. Her latest novel, I Am Venus, explores the identity of the model for Velázquez’s Rokeby Venus, the painter’s only extant female nude. Her previous fiction includes the international bestseller Frida, based on the relationship between Frida Kahlo and Diego Rivera, and Sister Teresa, based on the life of Saint Teresa. This novel was adapted for the stage at the Actors Studio in Los Angeles. Mujica has won numerous prizes for her writing, including first prize in the 2015 Maryland Writers’ Association national fiction competition. This year she also won prizes for her story, “Ox,” and her novel-in-progress, Lola in Paradise. Her essays have appeared in the New York Times, the Washington Post, and hundreds of other publications.

A young woman struggles with the loss of her husband and the category it suddenly puts her in.

Our Symphony with Animals: On Health, Empathy, and Our Shared Destinies