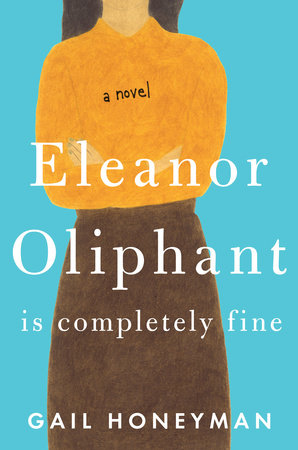 The title Eleanor Oliphant Is Completely Fine is declarative enough to give rise to a silent question, one that becomes vexing within the first few pages of the book: Is Eleanor fine?

Eleanor, at least for the majority of the story, is convinced that, yes, she is. Maybe not great. Maybe not excellent. But just fine, thank you for asking. She works Monday through Friday from 8:30 a.m. to 5:30 p.m. On Fridays, she buys a frozen pizza, a bottle of chianti, and two bottles of vodka, and drinks and sleeps until Monday comes back around.

“Work is fine. Everything’s fine,” she tells the social worker who visits her early in the story. During that visit, Eleanor, who narrates the novel in the first person, reveals that social workers visit her biannually at the apartment she’s lived in since she was 17, when social services arranged for her to move there after her final foster placement. The place is outfitted with furniture that “was provided by a charity that helps vulnerable young people and ex-offenders when they move into a new home.”

Something happened to Eleanor. Something that makes people pity her, like the social worker who, when speaking to her, trails off, “looking awkward, sad, embarrassed.”

“Ah, I knew them well,” Eleanor narrates. “The holy trinity of Oliphant expressions.”

The reader doesn’t find out exactly what happened until the final pages, even though it feels like the answer might be coming at nearly every turn. That suspense makes the book compelling, vivid, and delightfully frustrating.

Reading the novel is also delightfully funny. Looking through Eleanor’s eyes is like looking at the world through funhouse mirrors. Things that aren’t usually amusing all of a sudden become so. I laughed out loud when she described the dance floor at a wedding:

“Then the beat changed abruptly and everyone started doing the same thing, making strange shapes with their arms above their head. It took me a moment or two to learn the shapes, and then I was able to copy them. Free-form jigging, communal shapes in the air; free-form jigging, communal shapes in the air...During the next free-form jigging section, I started to wonder why the band was singing about, presumably, the Young Men’s Christian Association, but then, from my very limited exposure to popular music, people did seem to sing about umbrellas and fire-starting and Emily Brontë novels, so, I supposed, why not a gender-and faith-based youth organization?”

Beyond the question of what happened to Eleanor in her childhood, other mysteries propel the reader forward in enjoyably frustrating ways, like the question of when, and if, Eleanor will ever meet the man whom she falls overwhelmingly and improbably in love with from afar.

It’s the kind of crush a middle-schooler would have: totally consuming and utterly without merit. The man, a musician, is egotistical and undeserving of her adoration. That fact is made obvious to readers, but Eleanor is blindly unaware.

That adoration is what motivates Eleanor to change her decade-long routine. She buys a computer to research the musician. She gives herself a makeover, which includes new clothes, a haircut and color, and a manicure.

While the musician is what motivates her physical transformation, her relationship with Raymond, the IT guy at her office, is the catalyst for an inner transformation. Their relationship is platonic, but at times veers slightly into romantic territory.

Eleanor’s lack of knowledge of social norms makes her an unreliable narrator, so it’s hard to know exactly where her relationship with Raymond lies. The reader has to sift between the words for what really may be going on. The question of will they or won’t they presents another tantalizing nugget that propels the reader forward.

And while Eleanor certainly isn’t completely fine and has more than a few things to learn about the world, there’s a lot the world could learn from Eleanor, too.

Avery J.C. Kleinman is a producer for the Kojo Nnamdi Show, a talk show on WAMU, Washington, DC’s NPR station. Follow her @averyjck.