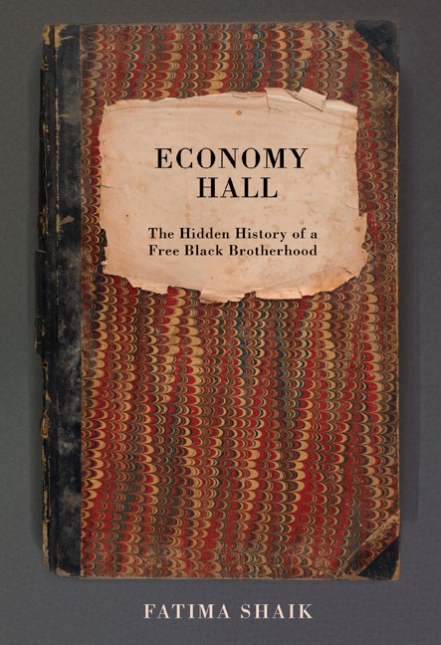 History must be written on multiple levels. A broad sweep of the great men and women, the key clashes and wars, and the ideas and trends is necessary to see the long arc — the shape and direction — of the world we live in. However, that grand sweep is itself made up of countless quotidian moments in the lives of ordinary people, the problems and conflicts that make up individual lives.

But studying the specific, the daily lives of the never famous, and turning it into a compelling work involves both painstaking research and serendipity. That mix of the two is the story of Economy Hall: The Hidden History of a Free Black Brotherhood.

Economy Hall was a mutual-aid society of free Black men in New Orleans from 1836 until its building was destroyed by Hurricane Betsy in 1965. Author Fatima Shaik came by its history after her father was hired to help remove furniture from the dilapidated structure and decided to keep the two dozen notebooks that contained the organization’s handwritten minutes. Having grown up with the notebooks in her home, New Orleans native and novelist Shaik finally decided to explore them, rediscovering the story of this unique organization in the process.

The history she tells in Economy Hall is powerful in the way that only the most ordinary things can be powerful. It is also, to a large extent, the biography of one man: Ludger Boguille, the one-time secretary of Economy Hall who, for decades, took detailed minutes of their meetings. His work stretched from the antebellum period through the Civil War, Reconstruction, and the dawn of the Jim Crow era.

Boguille was the son of François Boguille and Suzanne Butel, who emigrated to America during the Haitian Revolution and settled in New Orleans, where they found a community of free people of color — often called Creoles — that was well established by the time the Louisiana Purchase made the Crescent City part of the United States in 1803. It was a diverse group comprised largely of mixed-race people who tended toward the well-educated and well-to-do. It was also important, since free people of color constituted a third of the population of New Orleans, then America’s fifth-largest city, when Ludger Boguille was born in 1810.

Economy Hall — whose members called themselves Economistes — was made up of literate property owners: contractors, international brokers, clothing-store owners, shoemakers, and clerks. They came together as a combination social club (complete with dinners, debates, and dances) and aid society that covered unexpected expenses like members’ medical bills and burial costs.

They were not revolutionaries. In fact, some of these first-generation Economistes, including Boguille’s parents, were themselves slaveholders. However, they were also risk takers: Such associations of Black people were illegal because whites lived in constant fear of uprisings by the enslaved.

Economy Hall was a secret organization in its earliest years, but members hoped the example of their charity and good manners would convince white society of their worthiness. They practiced what today might be called “responsibility politics” without any apparent qualms, assuming that their basic bourgeois decency would be an engine of equality and civil rights.

Shaik has done prodigious and fascinating research on the lives of various members, and on antebellum life in general. We learn of multiple lawsuits and out-of-wedlock births that challenged the Economistes’ claim to moral leadership. We also get a visceral portrait of how ubiquitous slavery once was, with slave sales taking place on sidewalks and holding pens fouling residential streets.

While they may not have been radicals, the Economistes were charitable and civic minded. Boguille and his wife, Mary Ann, were both teachers committed to education for all Black people; Boguille risked his life to take on an enslaved boy as a student. As the issue of slavery became increasingly contentious, Shaik outlines how the Dred Scott decision and the Fugitive Slave Act impacted the Economistes, pushing them toward a more aggressive anti-slavery stance.

Still, when Louisiana seceded from the Union and war broke out, a number of Economistes joined the Confederate Army’s segregated unit, the Native Guard — a kind of militia for people of color. While there is little direct evidence of how they felt about their role in the fighting, Shaik points out that they had little choice but to join up.

Regardless, their time as Confederate soldiers was short-lived. New Orleans fell to Union control very early in the war, and the Native Guard was converted to the command of Union General Benjamin Butler, which turned Boguille and at least 10 fellow Economistes into some of the first Black officers in the U.S.

Once the war was over, Economy Hall became much more overtly a civil rights organization. Its commitment to education for Black children grew stronger and more systematic, and members threw themselves behind Louisiana’s Radical Republican constitution, which not only guaranteed the right of Black people to vote, but also allowed for the first integrated schools in the state.

Boguille worked for the Freedman’s Aid Association, helped found the Friends of Universal Suffrage, and taught for the Freedmen’s Bureau, while Mary Ann was head of the Douglass School for Negroes at a time when Black children were attacked while walking to school. Boguille was active in registering Blacks to vote, and Economy Hall sponsored a Ratification Dinner to campaign for the new constitution.

Shaik takes time to place the evolution of the hall in the larger narrative of the country during those years. Shortly after we see the Economistes’ fervent support for political change during Reconstruction, we see their efforts fail. At least two members of the hall died in the infamous Colfax Massacre in 1873; Black voters were beaten by roving mobs; and a segregationist Democrat was elected Louisiana’s state superintendent of education, putting an end to integrated schools. The Freedman’s Bank (where several Economistes were depositors) failed, and Federal troops were withdrawn from New Orleans after the botched election of 1876.

Economy Hall survived but was reduced largely to hosting social functions. With Jim Crow laws no longer recognizing the distinction between Creole and Black, the hall ended its focus on the upper crust of Creole society and became a place for all of Black New Orleans to meet and mix. It hosted recitals, concerts, dances, and school performances during a period of great musical ferment in the city. Brass marching bands became central to community life, ragtime established an aesthetic of individual and group improvisation, and, over a 30-year period, jazz was born.

The Eagle Brass Band, a group central to the early history of jazz, played regularly at Economy Hall, which, for a time, showcased the finest in local music. A member of the Eagle Brass Band likened playing there to playing Carnegie Hall. In the years after World War I, Kid Ory rented the hall for his own shows, once hiring a young Louis Armstrong to sit in. This further cemented the hall’s reputation as a vital entity in the birth and preservation of jazz. As recently as 2019, there was an Economy Hall tent at the New Orleans Jazz and Heritage Festival.

Shaik has incorporated sources that range far beyond the walls of Economy Hall and the lives of the Economistes. Indeed, one of the pleasures here is seeing how many intriguing topics are relevant to this story, from the African Colonization Society and Mexican independence to Louisiana’s post-war descent into terror and, finally, the emergence of jazz.

For the most part, this information is woven together smoothly. In a few instances, however, these smaller histories could be clearer. And the extent to which Shaik speculates about various historical matters becomes an issue occasionally. But these quibbles hardly detract from the pleasures and importance of this book. The gift of Economy Hall is that it memorializes a once-active society that was swept up in — and tried to steer — some of the most pivotal events in New Orleans.

More broadly, the men of the hall lived out the travails of American history — the struggle for prosperity; the tension between individuality and community and between diversity and homogeneity; the horrors of racism; and the fight for basic dignity and rights. If the arc of the universe is long, it bends toward institutions like Economy Hall.