Dünkirchen 1940: The German View of Dunkirk 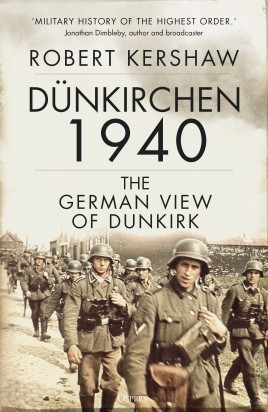 Warfare is an inherently difficult topic to write about; it involves myriad perspectives, motivations, and tactics. Modern warfare, which leaves behind a treasure trove of documents and correspondence, can be even more difficult to parse. Robert Kershaw’s Dünkirchen 1940: The German View of Dunkirk narrows the focus to a specific battle and examines it from a heretofore lesser-known vantage point: that of the Germans.

The miraculous evacuation of Dunkirk is often portrayed as a draw, or even a victory, from the Allied point of view. Operation Dynamo resulted in the rescue of more than 338,000 British and French soldiers, though with heavy losses to infrastructure in the French town of Dunkirk itself and to the fighters who stayed behind to hold the line as their comrades fled. Had the Germans captured or killed this force, it is likely World War II would have had a different outcome.

Kershaw presents a detailed — occasionally too detailed — picture of the lead-up to the evacuation, including intimate gems such as this:

“Travel between France and Belgium along the fortified frontier to the east of Dunkirk was forbidden. A bizarre consequence of this was the slavish rule applied by zealous officials at a wedding, where the French bride and Belgian groom were obliged to exchange vows across a table positioned precisely, with legs either side of the frontier demarcation line.”

These nuggets lend a personal air to the story of Dunkirk. Unfortunately, Kershaw often seems so consumed by mapping out the massive, rapid troop movements that it’s difficult to keep track of the overall battle. The sheer scale of the conflict means thousands of men were on the march at any given time, and the author includes such minute detail that the reader may struggle to understand the bigger picture.

Still, the inclusion of German soldiers’ accounts, many previously unexamined, offers insight into the mindset of Hitler and his subordinates. Explaining that German troops used Pervitin, a methylamphetamine that “banished sleep and hunger while inducing a gratifying form of euphoria,” Kershaw then gives us a firsthand account of what the drug was meant to mask courtesy of Wehrmacht soldier Felix Klaus:

“Excruciating pain showed on [the soldiers’] faces as they pulled on boots over swollen feet once again. Shoulders ached from carrying machine guns all day long and hip bones smartly burned with the weight of heavily loaded belt orders. And we were going to do it again today?”

From German letters and diary entries, we learn that Dunkirk, at least at first, seemed an easy victory for Hitler. Infantry, motorcycle brigades, and tanks crushed French resistance already weakened by the perception that, for France, the war was already lost. While Belgian troops offered stiff opposition, they lacked the numbers necessary to stop the Germans.

Hitler and his lieutenants relied heavily on propaganda to further their agenda:

“‘We’re swimming in good fortune,’ Goebbels wrote in his diary after the fall of Brussels. Propaganda efforts bore fruit, the nation paid close attention to developments. Schoolchildren monitored the advance of the German armies across the Low Countries, sticking marker pins in maps.”

Although involving the entire nation in the war seemed clever at first, it later backfired when German troops, having been repeatedly told they were invincible, began to crack. This, along with Hitler’s inexplicable order to halt the German advance when it seemed they were on the cusp of victory, is cited as a major reason why the Wehrmacht was unable to stop the Dunkirk evacuation. But Kershaw also highlights another important factor:

“Most historical accounts rationalizing less than total German victory at Dunkirk dwell on the German Panzer Halt Order of 24 May…A more rewarding area of research is to ask why it was that the [British Expeditionary Force] could, over nine days — only one of which included the Halt Order — evacuate its core fighting divisions…The true ‘miracle’ of Dunkirk was the crucial four-day period between 29 May and 1 June when the bulk of these quality divisions were lifted from the port and beaches.”

Overall, Robert Kershaw’s examination of Dunkirk through the eyes of Germans is a compelling new account of one of the most important battles of the Second World War. It’s worth a read for any military buff or student of history seeking new insight into a familiar story.