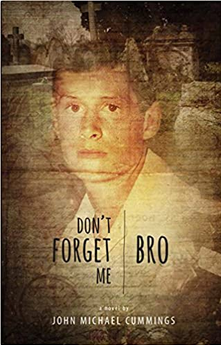 A dying brother’s last plea: “Don’t forget me, bro.” Would a man really think his brother would forget him?

He might. Mark Barr drives through the night from New York City to West Virginia, “too scared to leave the safety of the middle lane,” for the funeral of his brother Steve, someone he wrote off years ago.

“For the last two decades, [Steve] had been holed up in a state-subsidized apartment behind the Wal-Mart in Alma, West Virginia, a hundred pounds overweight, doped up on every kind of ‘mental illness’ medication the city hospital could fill him up with.”

Mark’s journey home for his brother’s funeral is his first trip back in 11 years. Only the rest of the family has decided there will be no funeral.

Mark is shocked to discover that his estranged parents have managed to agree on one thing: that Steve will be cremated, and that there will be no funeral, no memorial service, no outside acknowledgement of his death. “We Barrs were a funeral family. Irish Catholics were a casket-in-the-ground people. Wakes, funerals, pallbearers. Tradition.”

As the family wrangles over how or whether they will acknowledge Steve’s death, Mark explores the family’s history and learns there are many things they never knew about Steve.

He discovers a beautiful set of murals Steve painted in a group home for special-needs adults. A friend — and who knew Steve had friends? — gives the family 249 photographs he took of Steve in various locations around the state and in a variety of simple costumes. The pictures the family has of him are few and grainy. In one picture, Mark says, “he was just 48 specks.”

Mark finds his father still the bully he always was. He had beaten his sons for any reason or none, and Mark is still afraid to speak to him. “With my father, every uttered sound was a trip wire.”

The family home is a battered old house his grandmother had referred to as “woman-killer” because it was set up to maximize the difficulty of the work the women had to do. He reflects on the time Steve was first confined to a psychiatric facility, when he and their brother Greg had gone to visit, but had run off and left him.

“That day it was clear. There was no love in my family.”

This picture of unrelieved bleakness and pain might be unbearable to read if it were not for the clarity, honesty, and lean grace of Cummings’ writing. Anyone who has ever lost a loved one to the squalor that can follow mental illness or substance abuse will recognize the pain Mark goes through, and his discoveries of the unexpected beauties of Steve’s life.

He also faces himself, knowing that even in his relatively successful life away from Alma, he has still carried the pain and the fear that he would turn out to be a bully like his father. In the end, the dysfunctional family reaches a resolution and acknowledges Steve’s life and passing, albeit in its own dysfunctional way.

Writes Cummings in Don’t Forget Me, Bro: “You can’t, you shouldn’t, go home again. Still you do, and you must.” His journey home has resulted in a novel of piercing clarity and unexpected beauty. It’s well worth the trip.

Susan Storer Clark is a frequent contributor to the Washington Independent Review of Books. She is a former radio and television journalist. Since retiring from the federal government, she has completed her first novel, set in the urban turbulence of 19th-century America, and is at work on her second, the fictionalized life of a slave captured by Francis Drake in 1580. Clark has been a member of the Holey Road Writers for more than 10 years. She and her husband, Rich, recently moved from the Washington, DC, area to Seattle, where they are renovating an old farmhouse, and where she is finally learning to play the guitar properly.