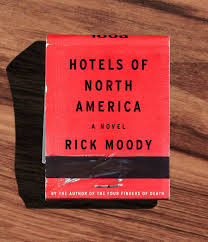 “Oversharing” existed long before the Internet. Few among us haven’t shuddered through a holiday dinner listening to the excruciating details of Uncle Fred’s appendectomy, for example. But the relative anonymity of social media means it’s now far easier to convey Too Much Information to more people than ever before.

Reviewers can be as guilty as anyone else. Maybe we inject a few of our own experiences in order to seem more authoritative (or just to feed our egos). It’s usually crucial, though, to focus on the subject at hand. If we stray too far into personal disclosures, we had better be leading a verrrrry interesting life.

Reginald Edward Morse — the protagonist in Rick Moody’s new novel, Hotels of North America — leads just such a life and tells the world all about it on a site called RateYourLodgings.com, where he claims to rank among the top contributors.

He gets around, no doubt about it: One of his posts begins with a recitation of places he’s stayed that rivals Johnny Cash’s classic recording of “I’ve Been Everywhere” before concluding that Cleveland is the most hapless American city.

At least in theory, he reports on accommodations ranging from pompous and posh big-city digs with turndown services and mints on the pillows to roach-infested motels frequented by meth addicts.

But for every rant about potpourri or bathrooms with insufficient counter space or pathetic attempts to instill customer loyalty with fresh-baked cookies, there are multiple messy tales about infidelity and divorce, a career in alarming decline, and a failed relationship with a daughter who is never seen but apparently much missed.

On occasion, Morse engages with fans (who may or may not be real) and detractors; the latter group includes the site’s moderators, who understandably have mixed feelings about the relevance and value of Morse’s contributions.

Early on, we learn that Morse isn’t above coming up with creative excuses to avoid paying the bill at the ends of his stays. In another instance, he attempts to disguise a rendezvous by posting, “My friend said I should meet his friend in Chicago. It was actually Detroit, in all honesty, but as these reviews are appearing in a public forum, I’m going to say it was Chicago, and I have made up a hotel and an address, and you will simply have to believe me that this hotel is exactly like the hotel in question, and thus my rating is accurate, even if it is accurate only by analogy.”

Morse’s RateYourLodgings.com posts wander back and forth over a timeline spanning more than three decades (thanks to a few reviews of long-ago stays). The approach helps to unpack Morse’s peripatetic life story, but it can be a little confusing. (Fortunately, the endpapers of this relatively short book provide a helpful chronological summary tracking locations and whom Morse was sleeping with on each occasion.)

The inherent digressions can be pretty amusing, too. Morse’s idea of a terrific product review, it turns out, is an examination of sugar-free gummy bears detailing at great length the unfortunate side effects of overindulging. (It’s right up there with the highly creative online reviews found here.)

But some are more sobering: a discussion of “home” describes it as, among other things, “where the government of your nation believes you live”; “where you first sang whatever you first sang”; and “any address that can cause you to tear up.”

While Morse doesn’t color between the lines, author Moody doesn’t either. Despite the book’s title, he has Morse visit and review several hotels in Europe as well as alternative temporary lodgings, including an IKEA parking lot in New Haven and an abandoned hardware store in a bad part of Brooklyn.

No matter. As Morse goes to more than a few places you really shouldn’t go and steadfastly keeps the curtains open and the blinds up, it’s fun to be a turn-the-pages voyeur.

Randy Cepuch is a “Level 15 Hotel Expert” on TripAdvisor.com and has earned 19 “badges” for his reviews on that site, but he has absolutely no idea what either of those designations means. He is also the author of A Weekend with Warren Buffett and Other Shareholder Meeting Adventures (Basic Books, 2007), a business travelogue.