Don’t Count Me Out: A Baltimore Dope Fiend’s Miraculous Recovery

Never underestimate our capacity for redemption. 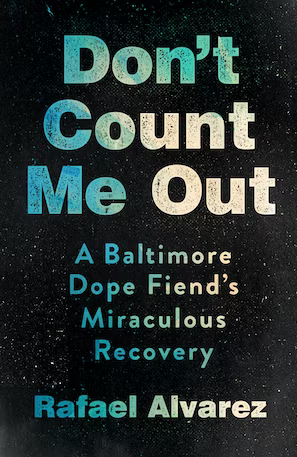 Don’t Count Me Out is a story of the power of one’s past and the tenacity to overcome it. In it, Rafael Alvarez — a onetime reporter for the Baltimore Sun and writer for the Baltimore-based TV drama “The Wire” — chronicles the life of Bruce White, a low-level criminal who, during his outlaw days, haunted the streets of Charm City.

Alvarez details White’s descent into the drug trade, which was driven by the demons that possessed him early on. His parents were neglectful and addicts themselves. Mom and Dad readily had highballs at hand, and Mom’s purse contained the valium necessary to soothe Dad after a bad day at work. White’s family life could make a case study for both sides of the nature vs. nurture debate.

Later, White was molested by two older boys, a point the author reports matter-of-factly. While it may have served the narrative better if Alvarez had explored these assaults — and their impact on White’s future behavior — more thoroughly, White is not given to blaming others for his actions. Still, in light of his upbringing, is it any wonder his chosen path would not be straight and narrow?

White’s list of crimes is sizable and include those both petty (drug theft) and horrific (accidentally killing his pregnant wife, Patti, after crashing his motorcycle while operating it under the influence). But what could be a mere checklist of transgressions becomes, in Alvarez’s hands, something more: the tale of a man at sea unable to control his baser instincts.

The book is also a meditation on the mundanity of addiction. White’s regular fixes are portrayed almost as menial tasks that must be performed. Boil the water, melt the pills or powder, shoot them up, rinse and repeat. Drug use isn’t glorified, to Alverez’s credit. Rather, addiction is revealed as the chore it is.

White is haunted by the loss of his wife and his role in her death, and he’s equally devastated by his estranged daughter’s drug use. Because of the absence of White and her mother (also an addict and criminal), the girl was raised by her grandmother. Yet the sins of the parents are often visited on the child; the streets mostly raised her. In White’s second act as a counselor and halfway-house operator, he attempts to save her, but the underworld has her in its grasp.

White’s life of crime reaches its nadir when, one evening while sleeping, he is busted in on by a SWAT team seeking him for an earlier offense. Not recognizing that it’s the police, White pulls a gun. He ends up being shot multiple times before getting arrested and sent to prison.

He learns a lot behind bars: how to craft a shank out of a toothbrush; how to convince guards to look the other way during shower duels; and, most importantly, how to have drugs smuggled in underneath the postage stamps affixed to letters. Then, one day, recognizing the dead end he’s pursuing, White decides to stop. He’s had enough. It’s another example of the mundanity of addiction: At some point, without any grand epiphany, you simply grow tired of being you.

Today, White extols the virtues of Narcotics Anonymous as the tool he used to save himself. He goes to meetings, leverages the power of the motivation he gets from several sponsors, and chooses every day to refuse the buffet of drugs that once sustained him.

He’s now a role model who owns a series of recovery centers in Baltimore that allow him to repay society for what he took. White is proud, and rightfully so. He truly has changed his city for the better — a point even his erstwhile adversaries concede. Alvarez interviews a former defense attorney who’d once given up on White, the prosecutor who locked him up, and the judge who threw away the key. All are proud of the progress he has made, even if they give more credit to the system than to the man.

In the end, Rafael Alvarez’s depiction of Bruce White gives us hope in the power of redemption. Don’t Count Me Out may not be the most profound book you’ll ever read, but it’s a potent embodiment of the words of Bryan Stevenson, founder of the Equal Justice Initiative: “Each of us is more than the worst thing we’ve ever done.”

What So Proudly We Hailed: Francis Scott Key, A Life

Meet a man of many contradictions.