Al Franken, Giant of the Senate

Like Mitch McConnell, you’ll laugh so hard that milk shoots out your nose. 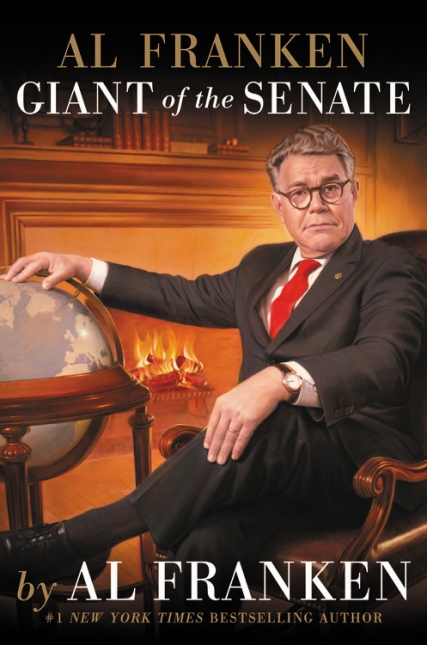 Make no mistake: Ironic title and intentionally supercilious cover photo aside, this book is the opening salvo in Al Franken’s run for the presidency in 2020. At least that’s what any marginally astute reader would take away from this funny, insightful walk through Franken’s life to this point.

On the other hand, perhaps he really means it when he tells People magazine and other media outlets (fake or otherwise) that the answer to such a concept is, emphatically, “no.” Still, there’s that book-jacket bio that reads, in part, “Senator Franken graduated from Harvard College and received his doctorate in right-wing megalomania studies from Trump University.”

That’s practically enough to get him drafted right there.

If Franken’s isn’t one of the first names Democrats have blurted out in considering who can possibly carry the banner forward in these troubled times, perhaps it’s because he’s been keeping his head down and working for the good folks of Minnesota rather than making speeches for the cameras. (Most of his time in the senatorial spotlight so far has been an outcome of his seat on the Judiciary Committee.)

Along the way, he’s racked up an impressive scorecard of legislative wins, or, if not wins, then valiant attempts to hold the Democratic line.

As most people know, Franken came into the American consciousness through 15 years of writing for, and eventually performing on, Saturday Night Live. He reminds us that he was with the show from its debut episode, meaning that he and longtime writing partner Tom Davis are responsible for some of the most iconic moments of comedy that Americans of a certain age still cherish.

Franken and Davis formed their writing partnership while students at a private boys’ prep school near Franken’s home in St. Louis Park, Minnesota. From high school on, virtually every job they held involved writing and performing comedy. Franken met his future wife, Franni, the first week of their freshman year in college, and they’ve been together ever since.

But readers of this book are probably most interested in a pretty basic set of questions: “SNL to the Senate? Really? How does that happen?”

There were many mileposts along that road, but Franken really got his political blood up in 1994, when Newt Gingrich swept in with a brand of take-no-prisoners partisanship that, from Franken’s perspective, led Congress to its current, fully Balkanized state.

(It was Gingrich who insisted Republicans stop bringing their families with them to DC, which is why members now fly in on Monday and out on Thursday. Staying in town and socializing among congressional families used to be how members got to know each other outside of politics and allowed them to form actual friendships. That’s a faint memory now.)

With Gingrich came the rest of the right-wing echo chamber, led by Rush Limbaugh. When Franken’s editor suggested he write a book about politics, the result was Rush Limbaugh is a Big Fat Idiot: And Other Observations, and its companion, Lies and the Lying Liars Who Tell Them: A Fair and Balanced Look at the Right.

What finally put him on the path to candidacy, though, was the tragic death of his friend Minnesota Senator Paul Wellstone, and a boast from the Republican who won that seat, Norm Coleman, that he was a “99 percent improvement” over Wellstone.

Franken’s experiences on the campaign trail were brutal and personally painful — there’s nothing quite like having every joke a comedian has ever written be purposely taken out of context by the Republican DeHumorizer™ and used against him — and resulted in a microscopic winning margin of 313 votes (after which he had to survive eight months of recounts and court battles before finally being allowed to take the oath of office).

And while it’s perhaps understandable that Democratic Senatorial Campaign Committee leaders Harry Reid and Chuck Schumer weren’t initially thrilled at his candidacy (even asking him to suggest other people to run), it’s bewildering that then-rock-star candidate and later president Barack Obama — who certainly understood how much he needed another Democratic senator and could’ve used his star power to dazzling effect — treated Franken as though he didn’t exist.

After his historically slender and drawn-out victory, Franken then had to prove to his colleagues that he wasn’t just the Funny Guy. For that, he adopted “the Hillary model…Be a workhorse, not a showhorse.”

Now a two-term senator, Franken talks with relative candor about his experiences, though he remains mindful of the decorum demanded by the Senate, to the point of using euphemisms anytime he’d prefer good ol’ Anglo-Saxon vulgarity.

It’s refreshing to hear how he and other senators look for common ground from which to build something like consensus, and just plain interesting to understand how he stays on the polite side of folks like Mitch McConnell.

Plus, this guy is whip smart, does all the homework, and makes it his raison d’etre to skewer ill-prepared, uninformed, or lying witnesses who come before him in committee. Exhibit A: Betsy DeVos.

Among many plum anecdotes, my favorite moment is when Franken suggests to Chuck Grassley that he smile more. If only he’d said it on the floor of the Senate.

But nothing beats the flat-out fun of the Ted Cruz chapter, entitled “Sophistry.” Bully for Franken for making it clear that, however disastrous things may seem right now, Cruz will never be a more acceptable answer.

Franken is at his most affecting when he focuses on stories about the people he knows, cares about, and represents. Certainly, he seems sincere in wanting the best for the people he represents. Come 2020, America, that could be you.