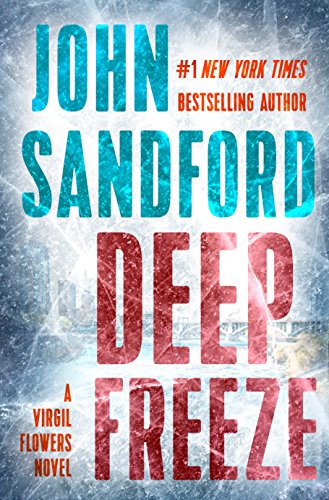 It’s hard to warm up to Virgil Flowers, the Minnesota state investigator who is the hero of John Sandford’s Deep Freeze.

It’s not because Flowers is an unsympathetic protagonist. In fact, he’s delightful and funny. And it’s certainly not because Sandford is a poor writer. Au contraire! He’s great. But the title says it all. It’s damn cold in Minnesota in the winter! Think ice cubes. Think ice fishing. Think “Fargo,” the Coen Brothers’ fabulous crime-caper movie.

You might have to put a sweater on when reading this novel. But it’s worth it.

In this, the 10th of the Flowers mysteries, there is little mystery. The reader knows right from the start who the killer is, a doofus dubbed “Bug Boy” by his small-town contemporaries because he owns a successful pest-control business and because, well, he was a bit of a nerd in high school.

High school. How does anyone survive it?

Bug Boy, whose real name is David Birkmann, did —  barely — and leads a fairly harmless life for years while harboring lustful thoughts about one of his classmates, a now beautiful, if somewhat shallow, woman. When he finally gets the chance 20 years after graduation, David makes a clumsy move on his dream girl and, as usual, is “squashed like a bug.”

They exchange slaps. Unfortunately for both Bug and the Beauty, David forgets he’s holding a bottle of champagne. His slap is fatal.

The discovery of her frozen body (of course; it’s Minnesota) brings Virgil Flowers back to the town, Trippton, where his dogged investigation uncovers a Barbie Doll sex scheme (don’t ask), multiple sex-partner swapping, and ancient high-school hormones inflamed by an upcoming reunion. It’s not hard to imagine how people there keep warm during the winter.

Virgil’s probe also precipitates another murder (once again, the cover-up is almost always worse than the original crime).

Deep Freeze is part crime procedural and part riff on small-town life. The characters are well-drawn but sometimes difficult to differentiate, perhaps because of all the bed-hopping. Sandford keeps it interesting with a little misdirection — some involving a pest-control van — so even though you know Flowers will get his man (and you know the man), you want to keep reading.

Flowers himself is a great character. He’s tough when he needs to be, but prefers thinking things through rather than pulling a gun. His duel of wits with Bug Boy (who obviously  comes half-prepared) is entertaining.

John Sandford is the pseudonym of Pulitzer Prize-winning journalist John Camp. He is the also author of 29 Prey novels featuring Lucas Davenport, four Kidd novels, and many other books, both fiction and nonfiction.

As with most writers of long-running series, Sandford can get wordy and rely on too much backstory. And his attempts at humor sometimes fall flat. But his books are great for those nights when you want to curl up under a blanket. Or two. Or three.

Lawrence De Maria, once a Pulitzer-nominated New York Times reporter, has written 17 thrillers and mysteries, which can be found as both e-books or in print on Amazon.com. His aversion to cold is pronounced. When the temperature dropped to 60 degrees is his hometown of Naples, FL, he considered moving South — until he realized he was already there. His most recent thriller, Shadow of the Black Womb, is available at ST. AUSTIN’S PRESS (BOOKS BY DE MARIA).