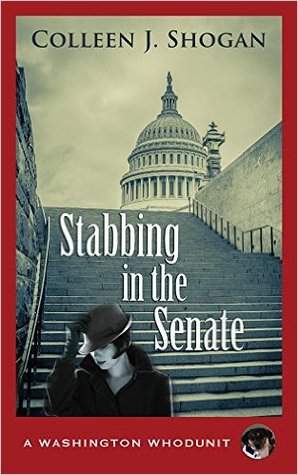 As a former Senate staffer and current deputy director of the Congressional Research Service at the Library of Congress, Colleen J. Shogan is uniquely qualified to write a mystery series steeped in politics and set in the heart of the nation’s capital. In that respect, the author’s background does not disappoint in Shogan’s debut novel, Stabbing in the Senate (A Washington Whodunit).

Stabbing in the Senate is an amateur sleuth mystery that jumps right into the action from the first page. Kit Marshall, a relatively new Senate staffer, hurries in early to work one morning to deliver a memo to her boss’s office, hoping she’ll get there before he arrives. Much to her horror, she finds Senator Langford stabbed in the chest in his office.

In valiant move on her part, she removes the murder weapon hoping to stanch the flow of blood and save his life. She’s too late. He’s already dead. Her efforts to save him leave her with blood on her hands and her fingerprints on the murder weapon. Both Senator Langford’s staff and the police who arrive on the scene immediately jump to the wrong conclusion: Kit is a murderer.

With Langford’s death, Kit faces the difficult task of finding a new job within the competitive Senate workplace. Being named in the press as the police’s prime suspect ruins her reputation and her chances of landing a new position. Even after the police clear her name, Kit believes she must find the killer herself or she’ll never convince another senator to hire her.

As the book points out, “Washington, D.C., a city with approximately five million people residing in its metropolitan area, was no Mayberry. But despite its considerable size, Washington boasted several attributes consistent with a small town. The most significant was the swiftness with which gossip spread.”

After the senator’s death, Kit finds the memo she’d delivered to his desk tossed into the recycle bin. This leads her to suspect Langford was murdered because of what was written in that memo, which laid out the reasons why the senator planned an unpopular vote against the continued funding of a mega-defense contractor. Langford, knowing this decision would ruffle many political and investor feathers, had kept his decision secret. Only a few staffers in the office knew of it.

While the police follow many leads, Kit and her best friend Meg focus on the memo and who was desperate enough to silence Senator Langford before the defense funding bill came to a vote. Her investigation uncovers several secrets and makes clear just how cutthroat fellow staffers, lobbyists, and politicians can be.

It takes all of Kit and Meg’s quick thinking and persistence to track down the killer and clear Kit’s name in the halls of the Senate.

While the novel has a fun premise and fast pacing in the beginning, it does feel uneven in some parts. The reasoning behind Kit’s continued investigation even after the police have cleared her is not convincingly explained. She also lies about her activities to her lover, even though when he finds out what she’s doing he’s quick to help. And she withholds information from the police despite receiving a threatening phone call from the killer. All of these things seem to be out of character with the smart, clever heroine portrayed in other parts of the novel.

The author occasionally relies too heavily on telling the reader instead of showing what is happening within the context of a scene. This is particularly true at the end, where the reader is simply told what motivated the crime and how the killer pulled off the murder within such a high-security building. The style is reminiscent of many older traditional mysteries in which the big reveal occurs at the end, with the narrator answering all of the remaining questions.

One place where the author truly shines is in giving the reader a peek into life in Washington, DC, and in working within Congress. I thoroughly enjoyed reading about the messy political process of creating new policies. Shogan describes the intricacies of policy-making in a way that is related so closely to the mystery, I never felt I was reading a political science lecture.

I believe readers who enjoy amateur sleuth mysteries written in the style of Agatha Christie will enjoy this promising debut mystery. It will be fun to watch the Washington Whodunit series grow and develop as Kit Marshall becomes embroiled in more murder and mayhem in future books.

This collection of short stories is alive with compelling characters and intriguing prose.