A National Book Award winner’s uplifting tale of life, death, and redemption in the Brooklyn projects. 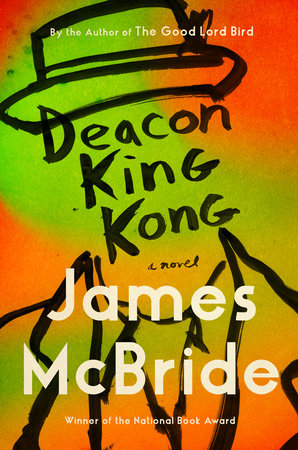 It’s September 1969 in south Brooklyn, and the amazin’ Mets are poised to capture the pennant, a miracle for sure. Miracles also happen in the Cause Houses “projects,” the fictional setting of James McBride’s Deacon King Kong: miracles of love and loyalty — signs and wonders of faith, resilience, and reconciliation.

For many of us outsiders, real-life high-rises like the Cause Houses might seem unwelcoming, even threatening. For McBride, a National Book Award winner for The Good Lord Bird (2013), this is only part of the picture. Cause Houses is still hair-trigger perilous for interlopers, but its own people, mostly African American and Latinx, live in raucous harmony, making the best of their effective exile from political or social influence.

Here’s the storyline: A young man is shot in the Cause Houses’ flag courtyard, a gathering place for residents and drug dealers alike (although both constituencies observe a strict daily schedule to avoid co-occupancy). The assailant: a chronically drunk old man, recently widowed, a church deacon known throughout the community as “Sportcoat” for his signature attire.

Sportcoat is universally viewed, even admired, as a familiar and harmless figure in the neighborhood. The target of his assault is anything but admired: a 19-year-old drug dealer. Shooter and victim go back years, but not in rancor.

The old man fires, point blank, and still misses, shearing off his victim’s ear and knocking him cold, and the novel’s unwinding miracle takes root. Sportcoat himself doesn’t remember the event, and his victim is also a little hazy on the details.

Still, there are scores of eyewitnesses. As rumors about the shooting spread, so too do its remarkable effects on the Cause Houses’ residents, as well as on a handful of neighboring Italians and Irish.

This is a beautiful, moving story, complex, layered, evocative, and often funny, as its near-Dickensian array of characters deals with the shooting’s aftermath. They range through all the predictable responses to the unexpected act: relief, joy, fear of reprisal, plus the impulse to protect the projects’ harmless champion from drug criminals and police alike.

The author tells this tale with an acute ear for the authentic cadences of urban colloquial speech; he never lapses into the language of stereotype. And underlying all the talk in this talk-rich novel are the familiar echoes of Southern evangelism, touchstones of language and culture for the projects’ black residents.

Sportcoat is a complex hero. He’s flawed but still a man of surprisingly expansive, if blunted, skills. He’s much more than his abrupt impulse to cross the courtyard and fire would seem to indicate, much more than an aimless drunk.

In Sportcoat’s mind, the irony and pathos in his circumstances are fuzzily present. His wife, dead for months before the fateful shooting, persists in his head, a ghost speaking sharply to the incomplete truth of his life:

“Jesus could baptize shit into sugar…That’s what Jesus did for me for sixty-seven years. He kept me sane. But he run out of gas, sweetheart. He got tired of me… I couldn’t stand to see the man I loved so much…sucking on crab legs and looking at the Statue of Liberty outside our window chatting about nothing, when I knowed all he wanted was for me to go back to bed so he could let a liquor bottle suck his guts out the minute I was gone to sleep again…”

James McBride is partial to miracles, as his earlier works also attest. Deacon King Kong’s contagion of the miraculous is never explicitly acknowledged by its burgeoning troop of beneficiaries. It’s just lived out day-to-day, fueled by a shared deep breath of forbearance, faith, and love in a decaying cityscape of quiet marvels.