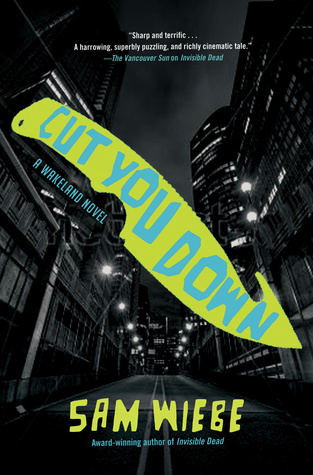 What a pleasure it is to encounter a new voice, a new kind of edginess, a contemporary formulation of detective fiction that has the heft and distinction of the genre’s classics. Cut You Down is a true puzzler, filled with unusual characters and majestically described places — though many of those places are not at all majestic.

There’s a lot of the seamy side of life here, and much about human behavior that rings true even in its repulsiveness. Is this Canadian noir? Perhaps.

This second title in the Wakeland Novel series presents a sequence of murky challenges for former policeman and youngish private investigator Dave Wakeland. One of them is to redefine his relationship with former girlfriend Sonia, who maintains her career on the Vancouver police force.

Another is to maintain a productive balance with his business partner, Jeff, who is taking their company into the realm of security work while Wakeland continues with the PI effort in the missing-persons arena.

The third is a nightmare of a new case that comes his way, a case that will test his limits.

When Wakeland gets a call from Dana Essex, his world changes. Essex wants him to find a missing college student named Tabitha Sorensen. The caller, a professor, has been a mentor and friend to Tabitha — perhaps even more than that.

Wakeland’s path is rocky and dangerous because Tabitha’s disappearance may be connected to a scandal at the college. She served on a committee that managed a large fund for school programs — a fund that has been stolen. Moreover, it also appears there are connections to local gangs.

In his investigation, Wakeland is aided by his sister, Kay, who works for him, and by Sonia, who is crossing lines that might end her police career. She is entangled with a cop who turns out to be dirty. Wakeland must work with and around unscrupulous characters to make headway, and he does: even wrestlers who moonlight as paid muscle. Even a professional assassin. Even a pair of hardened criminal brothers.

Wakeland moves through a murky world. Everything and everyone he touches has something to offer and something to hide. The investigation takes him to several locations in and around Vancouver and across the border into Washington. Most of the locations of these interrogations are unsavory, depressing places which author Sam Wiebe makes come alive.

Much of the book’s appeal derives from the author’s skill in etching these settings. Remember these creative-writing exercises? Describe someone’s character by describing his room, the inside of her glove compartment or purse. His back yard. Her kitchen cabinets and drawers. Closets. Offices. Wiebe must have excelled at them.

Over and over, he communicates the intangibles, the cultural ambience or atmosphere, through well-chosen and effectively combined tangibles. It’s a sophisticated form of telling by showing.

As Wakeland moves closer to exposing the hidden truths, he also exposes himself to greater risks. The missing-person case turns into a murder case, Wakeland becomes a target, and the pulse of the narrative climbs to higher and higher peaks of suspense.

It’s easy to see why Sam Wiebe, still early in his career, has already received accolades and awards. This thriller really thrills.