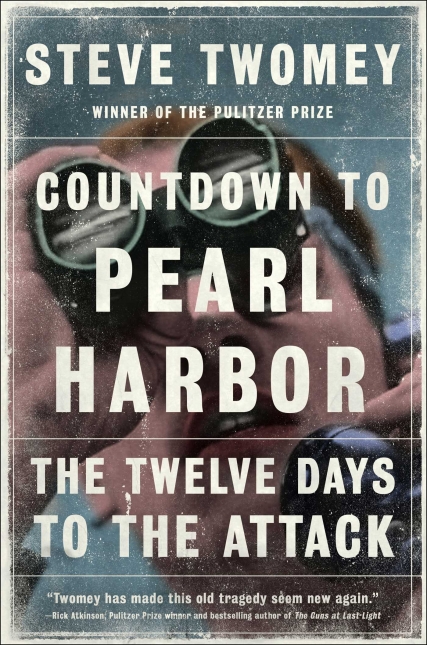 I have been fascinated by the Pearl Harbor attack ever since I read Day of Infamy by Walter Lord as a child. Lord, who also wrote A Night to Remember about the sinking of the Titanic, was a consummate storyteller and brought both tragedies to life.

I particularly remember one passage in Day of Infamy, where Lord described how prostitutes in Honolulu, who were told they could not give blood for wounded sailors, nevertheless volunteered to help in other ways. I was so young I didn’t know what a prostitute was, and was rather mystified why the blood of such patriotic women might be thought unsuitable for transfusion. Later, of course, I wised up, and also understood why the ladies of the night were so anxious to help. After all, their relationship with the U.S. Navy and many of its sailors was, ahem, intimate.

Which brings me to Countdown to Pearl Harbor: The Twelve Days to the Attack by Steve Twomey, an accomplished newspaper journalist who won the Pulitzer Prize for feature writing while at the Philadelphia Inquirer. Countdown is an excellent addition to the Pearl Harbor canon, and provides new insight to a subject that I thought I knew everything about.

Twomey concentrates on the days leading up to the Dec. 7, 1941, attack, giving the motives and actions of both the Japanese and American sides. He does not absolve the Japanese for being too shortsighted to understand they could never win a war against the United States, especially one begun with a stab in the back to rival all stabs in the back. The hubris of brilliant Japanese military men like Yamamoto, Fuchida, and Genda was startling.

Nor does he absolve the Americans for underestimating (mostly on racial grounds) Japanese military prowess and boldness. Franklin Delano Roosevelt also misjudged Japan’s intentions, although there is no evidence he withheld information to spark a war. FDR loved the Navy. The savaging of the Pacific Fleet hurt him deeply.

How badly were the Japanese eventually overmatched? Well, at the start of hostilities, Japan had 10 aircraft carriers; the U.S. had seven. By the time of the 1945 surrender, Japan had no carriers (actually, no fleet) and the U.S. had built more than a hundred. In fact, the U.S. 7th Fleet in the Pacific was larger than all the other navies in the world combined.

How badly did American leaders misjudge the Japanese in December 1941? The general (or, rather, admiral) consensus was that the Japanese could not sail across the northern Pacific and attack Hawaii or California undetected and do any damage. While U.S. Naval Intelligence later did brilliant work (especially at Midway), they dropped the ball in 1941, guessing that Japan’s four best carriers, which no one could locate, were in Japanese waters when they were actually launching planes off Hawaii.

With U.S.-Japanese negotiations breaking down in late November 1941, Washington knew something bad was about to happen somewhere. The War Department warned Admiral Husband Kimmel and General Walter Short, who, respectively, commanded the naval and army forces in Hawaii, that war was basically imminent.

But they were led to believe that the blow would fall elsewhere, perhaps in the Philippines. Both men were competent officers. Kimmel, in particular, was perhaps the most-respected admiral in the U.S. Navy. He was universally praised when he took the job in Hawaii and was credited with honing the U.S. Pacific Fleet to a razor’s edge of proficiency.

Unfortunately, while both men liked each other, inter-service rivalries prevented them from coordinating their defense plans. Short lined up his planes (from what was then called the Army Air Force) wingtip to wingtip to prevent sabotage, where they were sitting ducks for Japanese bombers. Kimmel assumed that at war’s outbreak he would sally forth and defeat the Japanese near Japan. He never imagined that his eight battleships and much of the rest of his fleet would be obliterated at their berths.

Twomey, a consummate storyteller, spices his tale with personal accounts on both sides before, during, and after the battle. He also does a good job explaining tactics and weaponry. The Americans said the waters of Pearl Harbor were too shallow for torpedoes dropped from planes to be effective, and, besides, the Japanese were second-rate airmen. Of course, those airmen had been fighting in China for years and had figured out that by putting special fins on existing torpedoes the waters of Pearl Harbor were perfect for sinking battleships.

In hindsight, it’s easy to be critical of many decisions (but not the courage) of the players, and, sure enough, there were many investigations and much scapegoating in the U.S. The careers of Short and Kimmel were destroyed. It is also not hard to find Kimmel a sympathetic figure. He knew he had failed. During the attack, a spent bullet hit him. Looking at the smudge on his uniform, he said of the bullet, “It would have been merciful had it killed me.” Later in the war, after he was forced to retire, his son, a submariner, was killed in combat.

Every generation seems to have a day that people say they will never forget. The JFK assassination. The 9/11 attacks. But the shock of Pearl Harbor stands out. The entire Pacific Fleet, the pride of the nation, was basically put out of action on a Sunday morning in a sneak attack that killed more than 2,000 sailors and temporarily turned the Pacific into a Japanese lake.

Those were the days when battleships were named after states, not politicians: Arizona. Oklahoma, California, West Virginia, Nevada, Tennessee, Maryland, Pennsylvania. The destruction of battleship row hit home. Many people expected a Japanese invasion of the West Coast. One can only imagine what the effect would be today, with our social media and 24/7 news cycle.

But as this excellent book makes abundantly clear, Pearl Harbor, despite the human costs and shock to national pride, was a lucky day for the U.S. The three American aircraft carriers based at Pearl Harbor were not in port and came in handy the following July at Midway, when they helped sink the very same Japanese carriers that struck Hawaii.

(After the attack, the United States immediately realized that the era of the battleship was over and began to rely on carrier groups, and does so to this day.)

The attack united the nation, turning isolationists into warriors. And Adolf Hitler, who never met a treaty he wouldn’t ignore, incredibly honored the one he made with Imperial Japan. He declared war on the U.S., thus ensuring Germany’s defeat.

I hope Twomey’s fine book achieves wide popularity. It may remind Americans of a time when they got off the floor and worked together.

Lawrence De Maria, once a Pulitzer-nominated New York Times reporter, has written more than a dozen thriller and mysteries on Amazon.com. His most recent thriller, THAWED, is available at ST. AUSTIN’S PRESS (BOOKS BY DE MARIA).