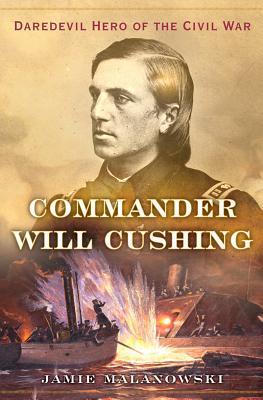 Soon as Bobby Lee shook Grant’s hand at Appomattox, a battle was on for American memory. Since the end of the Civil War, the Union has struggled mightily to beat back the partisans of the Lost Cause. Still there are those who style Lee’s war the “War Between the States” — the “War of Northern Aggression,” if you prefer.

Malanowski opens on exactly this problem. Reaching back to a Civil War veteran’s 1892 recollection, he quotes, “Some few of the names of the youth of the war are immortal.” In that day, at least, this roster included William Barker Cushing. A Northern naval hero to rival Admiral Farragut, Cushing won his fame sinking the Confederate ironclad Albemarle.

But Cushing has been forgotten, as Malanowski notes with a certain bitterness, while “there are plenty of Beauregards and Braggs [both Confederate] whose names are known but whose meager accomplishments melt next to Cushing’s.” In that spirit, Malanowski argues this fine old war story out of retirement.

With the exception of this statement of purpose, there are relatively few grand historical judgments on hand here, which is probably for the best. Instead, he brings to the table an eye for the evocative detail, as with Cushing’s examination results at the Naval Academy: “Deficient in Spanish. Aptitude for study: good. Habits of study: irregular. General conduct: bad. Aptitude for Naval Service: not good.”

Malanowski keeps a good wit ready, too, as when he writes of the naval officer’s duties, “A certain of amount of polish and diplomacy is required, but a lot of the job is about steering ships and killing people.”

Despite expulsion from the Naval Academy (the war mooted that setback), Cushing found that he was good at both the steering and the killing. As he wrote to a cousin of an early mission, “In this action I had the supreme pleasure of burning one of the vessels with my own hands.” To which Malanowski adds: “An artist was discovering his métier.” This is the sort of line he can get away with, on the credit of good humor.

Though hardly a Forrest Gump, Cushing manages to show up at a minor historical turning point or two. He witnesses the debut of the first Confederate ironclad, the CSS Virginia, a monstrous novelty that savaged several Union ships before being blunted by the USS Monitor.

Cushing missed the latter matchup; he had blockade duties to tend to. But he would return to the drama of the ironclads with his signature accomplishment: the destruction, using nothing but an open boat and a torpedo, of the CSS Albemarle. This is all very exciting and well rendered, though it seems to arrive too soon, with nearly a third of the book still to go.

That Cushing should survive the adventure was improbable in the extreme. That he should struggle to find satisfaction in its wake was almost inevitable, and Malanowski’s hands are tied by that fading enthusiasm.

With the end of the Civil War’s brutal glamour, “Cushing knew he wanted to stay in the navy, a safe and unimaginative choice.” The rest — there is somewhat too much of it — is a slow unraveling. In 1867, Cushing visits the hulk of the Albemarle. He wrote of the experience, “Sic transit gloria mundi.” So it goes.

He would die at just 32 years of age, having never risen above the rank of commander. Though Malanowski indulges a bit of overdone speculation on the occasion of Cushing’s death (“the country might not have had to wait until 1960 for a handsome naval hero to enter the White House”), he settles on a nicely modest conclusion. Cushing met his moment. That should suffice.

Commander Will Cushing restores a share of glory to the man, offering a sharply sketched adventure tale in the process. Where Cushing struggles to bear the weight of the narrative, his relatively thin résumé is to blame. Malanowski has done what he can to build up the pantheon of Union heroes. That’s good work — and worth reading.