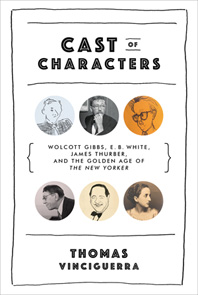 It seems as if the number of pages published about the New Yorker is approaching the number of pages published by the magazine. This latest volume, by Thomas Vinciguerra, weighs in at over 450 pages. It follows several other books about the magazine that appeared earlier this year, among which are a biography of writer Joseph Mitchell and the confessions of the New Yorker’s Comma Queen.

While three writers are mentioned in the subtitle — Wolcott Gibbs, E.B. White, and James Thurber — the vignettes on the jacket include three more portraits: Harold Ross, Robert Benchley, and Katharine White. A book about the first few decades of the New Yorker could not be written without mention of Ross, its founder, and Vinciguerra acknowledges that White is considered to have had a major effect in improving the quality of the magazine, but it is hard to see why Benchley was singled out. Vinciguerra devotes far more space to other writers, such as John O’Hara and St. Clair McKelway.

Vinciguerra notes in his acknowledgements that Cast of Characters originally started out as a biography of Wolcott Gibbs. Indeed, Gibbs dominates the book. A substantial amount of space is devoted to his writing, including an entire chapter about Gibbs as a theater critic, 20 pages on Gibbs’ portrait of Henry Luce with its parody of Time magazine’s writing style, and a great deal about Gibbs’ non-New Yorker activities such as his interest in Fire Island, where he founded a newspaper, and his play, “Season in the Sun.”

The focus shifts away from the New Yorker in some of the material about Thurber and White as well, with attention devoted to their personal lives and their books, including Thurber’s Broadway revue, “A Thurber Carnival,” and White’s children’s classics, Charlotte’s Web, Stuart Little, and The Trumpet of the Swan, along with his revision of Strunk’s Elements of Style.

The golden age of the New Yorker, according to Vinciguerra, was the period prior to World War II. A chapter describes the difficulty of producing the magazine during the war, when several of the writers had enlisted or devoted their time to assisting the war effort. The magazine did benefit from a new group of readers who had been introduced to it through the abridged edition issued to service members abroad.

It also published one of its most noted stories after the war: “Hiroshima” by John Hersey. The magazine took a serious tone with that issue, which was almost entirely devoted to that one story, later published as a book. Although during its early decades the magazine steered away from politics and serious moral issues, the Hersey article marked a change in focus.

Humor continues to be important in the magazine, but in recent decades serious issues are considered seriously. The scope of Vinciguerra’s book does not cover this, but longtime readers will surely remember Rachel Carson’s Silent Spring was first published as a three-part serial in the New Yorker, and few 21st century devotees will forget Art Spiegelman’s Sept. 24, 2001, cover with the shadow of the twin towers.

The author clearly idolizes his subjects’ writing to the point of including snippets that are not really a credit to their authors. He also includes many twice- or thrice-told anecdotes, which may be of interest to readers who have never read any of the earlier books about the magazine but are old chestnuts to those who have.

One of his best chapters deals with the toll of alcoholism on so many of the major figures at the New Yorker. Alcohol-fueled pranks were too often treated with amused tolerance. Although Vinciguerra repeats many stories of his drunken heroes, he does present a sober reckoning of the effects of excessive drinking on their health and lives.

The author concludes his narrative of the New Yorker’s history with the death of Harold Ross. In the final chapter, he recounts the deaths of several of the major figures who populate the story. The New Yorker has always honored its contributors with touching obituaries. Here, the excerpts that Vinciguerra provides do justice to both the subject of the tribute and its writer.

Vinciguerra has meticulously documented his sources, as illustrated by the 46 pages of notes. Indeed, of the 354 text pages, only eight are without either footnotes or endnotes, with one page having over a dozen credits and several with nearly that many. He has punctiliously inserted "[sic]" into the material he quotes — the bits of marginalia on rough copy, the scribbled messages and handwritten notes, the uncorrected typed memos — lest the reader worry that the author thought it was okay to hyphenate “weekend.” Perhaps he is trying to emulate the New Yorker’s famously diligent checkers and editors, but one does get a bit sick of the [sic]s.

This earnest effort to provide a history of the New Yorker’s early decades is readable and straightforward. It may appeal to those who have not read similar books by New Yorker writers whose prose has more pizzazz. Vinciguerra, who himself has written dozens of pieces for the magazine, has preferences that are both clear and clearly nostalgic. The magazine has changed since the decades Vinciguerra declares were its golden age — it would not have survived if it had remained the same.

Alice Padwe has edited all sorts of books, from spy thrillers to college textbooks. She has been a New Yorker reader for decades.

In nature civilized and tamed, the tortured artist found soothing sanctuary from the world.