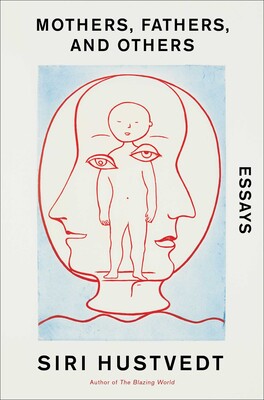 Siri Hustvedt’s insatiable curiosity and deep immersion in many disciplines — literature, philosophy, history, anthropology, art criticism, political theory, psychiatry, neuroscience, embryology, and epigenetics — shine through each of the 20 essays in her latest book, Mothers, Fathers, and Others.

An amalgamation of memoir, cultural criticism, and feminist philosophy, Hustvedt’s collection opens with a deeply personal essay, “Tillie,” a tribute to her paternal grandmother, Matilda Underdahl Hustvedt, who was born in 1887 in Minnesota to Norwegian parents.

What most interests Hustvedt — beyond making her grandmother come alive on the page — is the fact that Hustvedt’s father, in creating a text for his progeny called The Hustvedt Family, provides little information about his mother or his maternal line and focuses instead on his paternal ancestors. Hustvedt is concerned about this omission:

“Did the debt to her disappear into the forgotten land of the mother and mothers, the speechless realms of the womb where every human being begins and from which every human being is born, a territory Western culture has studiously repressed, suppressed, or avoided to a degree I have come to regard as spectacular?”

Indeed, the central project of many of these essays is to examine the position of mothers — and more broadly, women. In “A Walk with My Mother,” Hustvedt paints a portrait of her mother, Ester Vegan Hustvedt, who was born in Norway in 1923, married an American, raised a family in Minnesota, and died in 2019. While she “in many ways fulfilled a fantasy about mothers propagated in postwar, mid-century America,” she was far more complex than the “angel in the house” stereotype allows.

Grounded in her mother’s and her own experiences of motherhood, as well as a broad historical and cultural perspective, Hustvedt writes:

“Motherhood has been and is drowned in so much sentimental nonsense with so many punitive rules for how to act and feel that it remains a cultural straitjacket, even today. The metaphor is highly conscious. The straitjacket used to restrain psychiatric patients is an apt image for what [Adrienne] Rich meant by keeping women under male institutional control. When the maternal becomes a static concept, a fantasy about sacrificial nurturing without limit, it serves as a moral weapon to punish mothers who are perceived as wild.”

And because the institution of motherhood is “part of collective life itself,” women internalize these messages and police their own mothering with feelings of shame or guilt. Hustvedt shows these ideas are prevalent still on Internet sites devoted to good parenting which tell mothers that their time does not belong to them and that they must steal moments for themselves, while a father’s time “belongs to him,” and he must be convinced to spend time with his children for “selfish reasons,” such as improving his “executive functions.”

These messages, Hustvedt argues, pander “to an audience that is not seeking enlightenment so much as confirmation for what they already believe” about the roles of mothers and fathers.

Hustvedt also considers “the many parents who do not fit into these neat mom and dad categories, adoptive parents, gay and lesbian parents, and trans parents,” as well as enslaved women who bore children after being raped by their masters.

“Imagine those mothers,” Hustvedt extorts. “I think all experience must be part of our understanding of motherhood. It must be expansive and complex, not narrow and simple.”

Later in the collection, in an essay titled “What Does a Man Want?” Hustvedt moves beyond women being omitted from histories or being put into straitjackets to being outright despised. In this long, wide-ranging examination of the roots of misogyny in Western culture, she asks the same question that the Italian poet Christine de Pizan posed in The Book of the City of Ladies in 1405:

“Why on earth it was that so many men…have said and continue to say and write such awful damning things about women and their ways.”

Misogyny, Hustvedt writes, is “a strange hate, if you think about it, because every human being was born from a woman or a person with female reproductive organs.” Having “read every book devoted to the subject” of misogyny that she could find, Hustvedt is “at once puzzled and grieved” by what she has learned.

Going back to the ancient Greeks — Plato’s idea that “the pregnant mind of the male philosopher gives birth to an idea,” and Aristotle’s hylomorphic theory that ascribed “soul, form, and animation” to male sperm and “passive matter” to the female host — Hustvedt traces a tradition of thought that is “haunted by the dream of paternal birth.” Dipping into contemporary embryology and epigenetics, she argues that scientific thinking is still in thrall to Greek tradition, ascribing to DNA “the role Aristotle and many who came after him gave to sperm — form and soul.”

Hustvedt further explores the ramifications of such thinking:

“The idea that the code, the letters or symbols, can be separated from materiality, the bodily stuff that is the genome, gives it a higher, Platonic spiritual reality, one that can be divorced from mere flesh or matter. Therefore the genome holds the secret to the real you, a disembodied essence or authentic self, which is performed in the zygote at the magical moment of fertilization, before the cells have multiplied, before implantation in a woman’s uterus, before the gradual parallel development of fetus and placenta inside a whole, not piecemeal, person.”

Such a “DNA fantasy” ignores much of what happens during gestation. “Pregnancy is not equivalent to a uterus,” Hustvedt argues. “It is not a uterus that hosts a predestined DNA soul. It is an active process of ongoing metamorphoses in the mature maternal body.”

Not only does stripping the female body of its active role render it little more than a host (akin to Aristotle’s notion of passive matter), but the “DNA as master controller” argument has also been “coopted by the anti-abortion forces in the United States and elsewhere to claim the authority of science.”

By giving genes a “godlike” status and claiming that the “‘person’ is right there from the start,” these forces have “effectively denied the reality that a female body is crucial to fetal development.” Not all science is equal, Hustvedt argues, and, in fact, there are kinds of science that “advance a hidden misogyny that is not surprisingly often accompanied by hidden racism.”

There is much more packed into this single essay — which alone is worth the investment in Hustvedt’s collection. For example, she traces the word authority to author, arguing that authorship is another version of “the fantasy of male birth”:

“The author is the father who finally gets to be a mother. He expels superior thoughts or a superior book from his higher mind, a mind innately designed by nature to populate the earth with his beautiful offspring.”

This idea of authority and authorship is one that Hustvedt picks up in another essay titled “The Future of Literature,” in which she explores the reasons why some men do not read books written by women.

“Reading fiction by women means giving oneself up to the authority of a woman, and many heterosexual men find their self-worth in recognition from other men, not from women,” she writes. “The idea of submission to a woman, even if it is only her words, is repugnant.” Reading fiction, Hustvedt argues, is valuable for precisely this reason: It requires us to surrender ourselves to someone else, to share the experiences and consciousness of another.

Written between 2011 and 2020, the essays in Mothers, Fathers, and Others take on myriad other topics: mourning and burial practices, the nature of mentor relationships, the porous boundaries between physical bodies and fields of study, the challenges of translation, the social phenomenon of scapegoating, and reading during the pandemic, as well as astute studies of literature (Jane Austen’s Persuasion and Emily Brontë’s Wuthering Heights) and art (Giovanni Bellini’s “St. Francis in Ecstasy” and the oeuvre of French American artist Louise Bourgeois).

Siri Hustvedt’s keen intellect is evident on every page of this stunning collection, proving herself an authority worthy of attention.