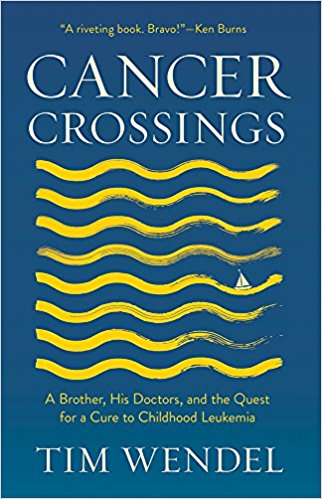 In her groundbreaking 1978 monograph, Illness as Metaphor, Susan Sontag calls out the ways that Western culture talks about cancer. She argues that the language of warfare, in which patients “battle” “invasive…colonizing” cancer cells and doctors attempt to “conquer” the disease, has real consequences for patients and their families. Psychologically, it places the onus of the fight on patients. Moreover, the stigmas around cancer can affect patients’ self-image.

Tim Wendel’s Cancer Crossings responds brilliantly to Sontag’s decades-old call for new metaphors, new ways of imagining cancer. In lieu of military metaphors, Wendel substitutes the mindful journey. The “crossings” of the book’s title refer to the practice of staying present, facing the unknown changes and challenges ahead with flexibility and resilience.

Part memoir and part medical history, Cancer Crossings tells the story of Wendel’s younger brother Eric, diagnosed with acute childhood leukemia at age 3. Wendel alternates between his own family history and the story of how a small team of doctors in the 1960s and ‘70s worked together to treat the disease.

At the time, most of their colleagues thought leukemia incurable, and “cancer” was still a secret, even shameful word. Some of those doctors — based at Roswell Park in Buffalo, NY — cared for Eric, enabling him to live far beyond the initial prognosis of 18 months.

The Wendel family’s frequent sailing trips across Lake Ontario become the narrative’s central metaphor. Learning to sail teaches Tim and his siblings metaphysical lessons about facing the uncertainty of Eric’s disease. As Wendel writes, “No matter what the wind brought our way, no matter how the situation played out, we could hang in the moment and somehow hold our own.”

The result is a quiet, even meditative book — a surprise given the potentially volatile subject matter of childhood cancer.

Take this passage in which Wendel recalls an early sailing trip. It captures the book’s understated tone and lovely writing:

“In the darkness, the lights of the hamlet’s few houses and the yacht club farther up the channel illuminated the calm waters inside the pair of breakwalls. Beyond the red light at the end of the left-hand-side pier, everything in the lake had already fallen into darkness and only the sounds of the wind in the treetops and the waves crashing against the shore reached us now.”

Through such subtle prose, Wendel approaches an emotional and highly fraught topic with gentleness and compassion for the reader. While there is certainly great feeling under the surface, Wendel also cultivates an aura of detachment. (In part, this distance might follow from the passage of time — his brother died 45 years ago.)

Wendel also extends kindness to the reader through the book’s hybridity. He interweaves anecdotes of growing up in an outdoorsy, athletic family of five in western New York State, the details of Eric’s cancer story, and the larger medical narrative.

In this way, the reader experiences relief from the more intense passages. This technique also creates a respectful tribute to Eric’s memory. Wendel recalls Eric in the fullness of his childhood — his love of hockey, his toughness, his wit — not merely through the lens of his cancer.

At times, though, the book’s restraint interferes with the medical drama that Wendel also wants to tell. Early on, we learn that the doctors who pioneered novel approaches to childhood leukemia were known by their peers as “renegades, pirates, cowboys.”

They were chastised for their aggressive treatments, for their willingness to experiment on young lives. Yet, we don’t fully get a sense of the career stakes and personal risks involved in bucking the medical establishment.

Wendel is best known as a sportswriter and historian who typically excels at writing about a team of underdogs, whether in sports or medicine. For this reader, however, there was a spark, an energy, missing from this piece of the narrative.

As a work of narrative nonfiction about cancer, Cancer Crossings initially calls to mind The Immortal Life of Henrietta Lacks, perhaps the popular-medicine story of the decade. Its author, Rebecca Skloot, recounts the life and legacy of one woman with cervical cancer while tackling big, messy themes of medical ethics, race, and class in U.S. history.

Wendel, in contrast, avoids critical sociology aside from one brief mention of race when detailing the history of St. Jude Children’s Research Hospital. With a few exceptions, Wendel largely reconstructs his medical history from the perspective of white male doctors now in their 80s and 90s, even as he notes the pioneering role of women like psychologist Jimmie Holland, as well as numerous doctors from abroad who were involved in these efforts when American doctors were unwilling to take on the work.

Readers interested in the history of medicine still have a lot to learn from Cancer Crossings. But what stayed with me was the personal narrative of cancer as experienced by the Wendel family. The book is most successful, and most moving, in the rich particulars that Wendel so deftly captures.