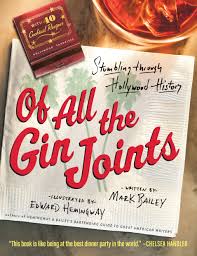 Of All the Gin Joints takes a ride through Hollywood history — from the turn-of-the-century Silent Era up through the 1960s and New Hollywood — with chapter-by-chapter stories of the stars, the bars, and their “booze-soaked stories,” all interspersed with classic cocktail recipes.

In other words, in between tales of alcohol ruining lives and squandering the talents of some of Hollywood’s biggest names, readers can whip up some tasty grog for themselves! And therein lies a charm you simply must slurp up and enjoy.

What makes Gin Joints more than just a book of cocktail concoctions or debauched Hollywood anecdotes is the way it smartly blends — stirs? — the two together. Thoroughly researched and well-sourced bios from author Mark Bailey, along with illustrations by Edward Hemingway, give Gin Joints style and movement.

A key takeaway that’s impossible to overlook is the watering down of Hollywood over time. Through tales of the Chateau Marmont (the hotel that lends a delicious irony to the term “checked in”) to the Ambassador Hotel, readers will be delighted to discover that the John Belushis, Jim Morrisons, and Dennis Hoppers who vomited through the prime of their careers were merely followers of a precedent set long ago.

In fact, it’s said the end of the silent-film era slightly tamed Hollywood, as it forced actors to pause drinking to learn their lines by 8 a.m. So, yes, there is proud history here, too. To boot: Decades before folks were passing out on the front steps of the Viper Room, the Moscow Mule was being invented at the Cock ‘n Bull.

It’s doubtful any of today’s starlets could hold a candle to the likes of, say, Tallulah Bankhead (1902-1968). This nudist and cocaine enthusiast who “consumed five packs of cigarettes and two fifths of Old Grand-Dad bourbon a day” starred in Alfred Hitchcock’s “Lifeboat.” Her final words on planet Earth were, “Codeine! Bourbon!” (Your move, Lindsay Lohan.)

Even when it comes to today’s rehab stints for drinking, drugs, or “exhaustion,” New Hollywood has clearly lost its edge. Consider MGM’s mandatory sobriety program for Buster Keaton: “Upon arrival [to rehab], you would immediately be put on a rigid liquid-only diet: whiskey, gin, rum, beer, brandy, wine. You’d get a drink every half hour. You’d throw up when necessary to avoid alcohol poisoning. After three days, you left swearing that you’d never touch another drop.” And that was during Prohibition.

Taken together, Gin Joints’ fun (and sometimes unintentionally sad) approach to history leaves readers with an informed take on a wide range of Hollywood’s days of yore. For a quick sampler flight: Who would have known that actress Jean Harlow (1911-1937) never wore underwear and “iced her nipples before scenes”?

Who could’ve guessed how John Wayne helped invent the margarita? And who wouldn’t be relieved to learn of Raymond Chandler’s penchant for zero solid food, daily glucose injections, and a “continuous alcohol siege”? (Finally: an explanation for why it’s impossible to figure out what the hell is happening in The Big Sleep.)

There’s no need here to get hung up on the short lives and failed relationships brought on by lack of moderation. After reading so many tales of depravity and early liver failure, the only appropriate thing to do, really, is sit back and pour yourself a stiff one. I suggest the Zombie or the Missionary’s Downfall.

(If any readers of this review are inclined to try Torpedo Juice — 1 1/2 oz. 190-proof grain alcohol/Everclear; 1 oz. unsweetened pineapple juice; 1/2 oz. simple syrup; and 1/2 oz. lime juice shaken and strained into a rocks glass — please do get in touch. Likewise with the Prairie Oyster.)

J. Grigsby Crawford is the author of The Gringo and a professional ghostwriter. He grew up in the Great American West and resides in Washington, DC. Follow him on Twitter at @grigscrawford.