Bridge to the Sun: The Secret Role of the Japanese Americans Who Fought in the Pacific in World War II

Unsung soldier heroes finally get their due. 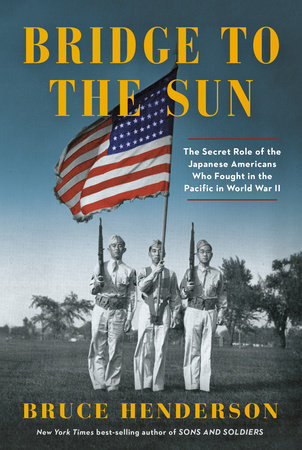 The story of the “Go for Broke” 442nd regimental combat team, composed of second-generation Japanese Americans who fought heroically in Italy, has been well told and even portrayed by Hollywood. Equally remarkable was their loyalty to a country that had interned 112,000 Japanese Americans, including many of their relatives, in remote desert locations.

But there were other Japanese Americans who fought for America, too — in the Pacific. The appendix of the newly published Bridge to the Sun contains 41 pages listing the names of Japanese American soldiers who served in the Pacific Theater in World War II. Included among them are 55 who gave their lives there.

They were battling against their ancestral homeland and, for those who’d spent the prewar years in Japan, against school chums and relatives. One even had family members in Hiroshima who thankfully were away when the first atomic bomb obliterated that city.

The stories of these Japanese American soldiers have long been lost in the mists of history. But no longer, thanks to this important work by Bruce Henderson, a New York Times bestselling author whose last book, Sons and Soldiers, told of Jewish German refugees who, as U.S. Army intelligence officers, used their native tongue to interrogate Nazi prisoners-of-war.

The two books complement each other but are notably different. Consider the ambivalence many of the Americans of Japanese descent must have felt enlisting to fight for the country that was simultaneously incarcerating their parents, brothers, and sisters. It would almost be akin to German Jewish refugees interrogating American POWs on behalf of the Nazis while their own relatives were in concentration camps. German Jewish refugees who joined the U.S. Army could take pride in fighting against a genocidal regime, but how could Japanese American soldiers feel the same?

Henderson attempts to answer these essential questions by focusing on six young men who graduated from the Military Intelligence Service Language School at Camp Savage, Minnesota, and went on to play critical roles in the battles of South Asia-Burma, Okinawa, Iwo Jima, the Admiralty Islands, and the remote Aleutian Islands of Alaska.

The first third of the book is largely devoted to their personal backgrounds and preparation for war. It’s edifying if not page-turning context. But then comes Pearl Harbor. After Japan attacked the Hawaiian naval base, President Roosevelt issued the heinous Executive Order 1066, which declared all Japanese Americans to be potential security threats and forcibly relocated them to isolated inland camps ringed by barbed wire and patrolled by armed soldiers.

Among those Henderson profiles is Nobuo “Nobby” Furuiye, from an assimilated farm family in Colorado, outside the evacuation zone. As an agricultural worker, he was exempted from the draft but enlisted anyway. Then there is Takejiro Higa from Hawaii. He was not interned but was barred from enlisting under a blanket policy defining even native-born Japanese Americans as “aliens ineligible to serve.” When the government backed off the ban, he, too, joined up. He’d been a student in Japan before the war. During the battle of Okinawa, he would encounter relatives and even his former middle-school teacher.

Through the stories of these men, Henderson chronicles the war in the Pacific. Though they fully prepared to fight, the men were not there for hand-to-hand combat. Instead, they played significant roles as supporting players.

Hiroshi “Roy” Matsumoto, from Laguna, California, a farm town southeast of Los Angeles, and the first in his immigrant family to be born in America, knew several Japanese dialects. In Burma, he overheard Japanese soldiers saying they planned to attack an isolated American platoon at dawn and kill them all. Conveying this information to his commanding officer, he saved the platoon from certain death.

On Los Negros, in the Admiralty Islands, there were no prisoners to question. But there was a treasure trove of documents found on dead Japanese soldiers and in abandoned buildings and bunkers, including an order that featured a detailed map of a planned counterattack to retake a landing strip. Tom Sakamoto of San Jose was the translator. “The attack started right on schedule that night, according to the order,” Henderson writes. But the Americans were ready and foiled it, leaving several hundred dead Japanese to 61 killed Americans.

Nobby Furuiye, like the rest, had a complicated relationship with the land of liberty. Though he was not interned, the woman he married was, and his daughter was born behind barbed wire. He finally got to meet her on her first birthday, Dec. 2, 1945. “The perfect day,” Henderson writes, “for Nobuo Furuiye to come home from war.”

Not all young Japanese American men chose to enlist, however. Gordon Hirabayashi refused the government order to relocate and instead went to prison. Long after the war, a federal three-judge panel vacated his convictions. Hirabayashi’s cousin Grant had been drafted before Pearl Harbor and served in Burma and China. “Both Grant and Gordon heard the same drumbeat of patriotism, and each in his own way was fighting to preserve the country he loved,” Henderson writes. How ironic that their country didn’t love them back.

Black Americans were also fighting for freedoms they didn’t enjoy at home. But here, too, Henderson finds irony: In Burma, Sgt. Matsumoto saw a fellow GI filling his canteen from a large canvas bag and went to fill his. “A black private stepped in front of him, blocking his way,” Henderson writes.

“Can I get some water?” Matsumoto asked. “No,” the private replied. “Not for Japs.”

Ultimately, in 1988, Congress passed, and President Reagan signed into law, an official apology and $20,000 in reparations for each surviving interned Japanese American. (Black Americans, Henderson does not note, are still waiting for some form of compensation for slavery and its long-lasting legacy of racial discrimination.)

This story, the author writes, “is one of action, pride, courage and sacrifice…In an America that too often prejudges people based on race and ethnicity, their timeless message of courage and patriotism should not be forgotten.” Thanks to Henderson’s book, it won’t be.