Bride of the Sea: A Novel

A young woman’s decision to remain in America rather than return to Saudi Arabia reverberates across generations. 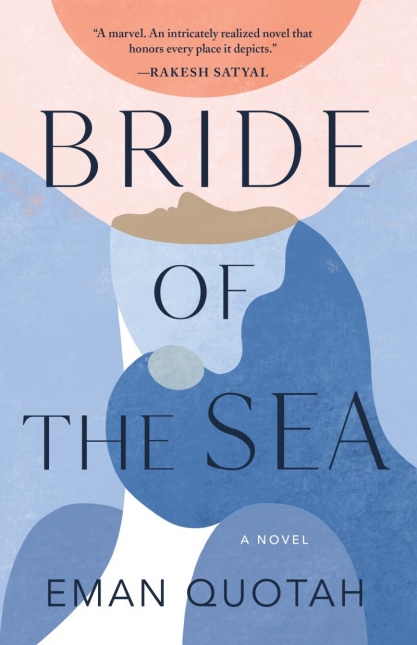 There are a few universal truths relating to love and marriage that Jane Austen might recognize even now, two centuries beyond her writing days. It turns out that human beings are still inclined to couple up, that matchmakers (online or otherwise) still exist, and that there will always be people invested in pairing up compatible genealogical lines. As to what happens after the wedding vows — that also remains the stuff of human drama, now as ever before.

Thus does Bride of the Sea, Eman Quotah’s debut novel, set off on a familiar path of love and marriage gone askew. From one generation to the next, and from the Arabian Peninsula across America and back, Quotah’s story offers a kaleidoscopic perspective on the weight of cultural traditions and obligations at home and abroad.

Soon after we meet Muneer, a young Saudi grad student studying journalism in Cleveland, and his wife, Saeedah, pregnant with the couple’s first child, we find the newlyweds at unfortunate odds. Whatever spark drew them together in Saudi Arabia has sadly fizzled amid expat university life in Ohio. Muneer is anxious about his future, while Saeedah appears bent on uncommunicative self-destruction. Neither knows how to fix what has gone sideways in their lives or how to reconnect their drifting hopes and dreams.

The unhappy couple is further burdened by their families’ expectations. While an educational stint abroad is allowable for Saudi sons and daughters, the notion of not ultimately returning home is frowned upon, and the concept of allowing one’s children to be brought up outside Islam is indefensible. The expectation is all but written in stone: Offspring of Saudi-born parents must return to their roots to be taught in their true native language, however foreign it may be to them.

Saeedah boldly throws down a gauntlet of truth to Muneer: She wants out and would rather live in America as a divorced, single parent than return to their homeland. Once the marriage has been quietly dissolved, Saeedah possesses the freedom she has yearned for, staying behind with her new daughter, Hanati, after Muneer returns to Saudi Arabia. She knows her freedom comes on borrowed time and will evaporate as soon as Hanati is old enough for school.

Later, with Hanati's fifth birthday fast approaching, Saeedah steals away from Ohio with child in tow. She invents a revised backstory for her life, one which will compel mother and daughter to hide behind curtains, assume new identities whenever necessary, and tell lies and half-truths to cover their tracks.

Hanati mourns the absence of the father she now only barely remembers, while Saeedah keeps an eye out for private investigators — hired, she assumes, by the ex-husband her daughter thinks is dead — lurking in unmarked cars.

Quotah weaves the real-life news of the day into the story, jumping between long car lines for gas during the 1970s oil embargo, Saddam Hussein’s invasion of Kuwait, and the multiple incursions of U.S. troops to the Middle East in the aftermath of 9/11.

Each chapter pegs its narrative to an historic benchmark as both familial and geopolitical events unfold. From time to time, the voice shifts to Hanati’s, revealing a patchwork of flashbacks from her now-adult perspective on the child she once was, when she couldn’t understand the need for the make-believe names or inexplicable road trips that always meant starting over yet again.

Would Bride of the Sea hold up as well without the structural backdrop of historical headlines along the way? It’s hard to say. The characters’ reactions to current events ably provide a first-person perspective on history from a non-American point of view, which is valuable in its own right. To comprehend what it means to be a Muslim in America, labeled a dangerous foreigner no matter where you were born, requires an empathy that can only come from putting oneself in another’s shoes (in novels as in life).

But what rings most true from Eman Quotah’s tale is the way it reveals two equal if contradictory human truths. The first is that a life lived in two worlds inevitably results in a lack of full ownership in either. And second, that one’s family history, no matter how well or ill understood, will contain unexpected connections to those whose language you may not speak, but whose voices and mannerisms elicit memories of the people you come from — including the people your own parents once were.

In Bride of the Sea, three generations coalesce around shared genealogy, religious beliefs, and traditions, but also around the shared pleasure of watching light dance on water, of breathing in aromas and sunsets, of experiencing the cool night air in a country that feels like the home you didn’t know you knew. I suspect Jane Austen would say such revelations are certainly worthy subjects.

Kristin H. Macomber is a writer in Cambridge, MA.

A sluggishly paced thriller that suffers, in part, from its own immense scope.