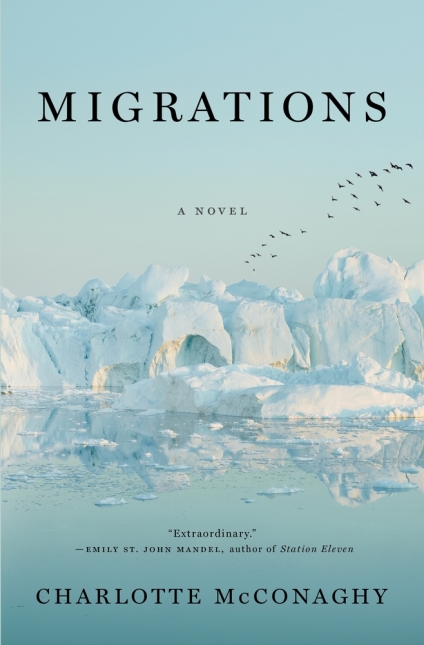 Charlotte McConaghy’s powerful new novel, Migrations, introduces us to a future marked by ecological collapse and mass extinction. Her world is one in which humans have rendered nearly all wild animals extinct, hunting prey large and small until few remain.

Those not exterminated have simply lost their habitats to our need for ever-expanding space, although we’ve kept a few animals in “sanctuaries” to convince ourselves we haven’t committed mass slaughter. Animals needed for food, such as fish, are kept in commercial captivity. Humans have done all of this with little regret or remorse.

The fate of nature and humanity is not the point of the story, however. McConaghy instead uses this catastrophe as the backdrop for the troubles and failings of her protagonist, Franny.

Franny is a woman haunted by her troubled past and that of her family. It would do a disservice to the reader to reveal too much, but suffice to say, Franny is well-schooled in horrific injuries inflicted by loved ones and in revisiting these injuries on herself. She is also talented at fleeing painful situations.

Indeed, Migrations is a story of flight. Much of the novel focuses on what is expected to be the final flight of the Arctic tern, of which only three are believed to survive. Franny tracks the birds, both to help her husband (a professor and advocate for the few surviving animal species) carry out his work and to continue her own flight from long-borne guilt.

She enlists the crew of a fishing boat to carry her on this voyage. They, too, have pasts to outrun: Trawlers such as theirs have left the sea depleted, and they are at risk of finding their profession outlawed. The captain, Ennis, and his crew follow Franny, hoping the remaining birds will lead them to one final, mythical catch. After this, they will be able to retire.

Yes, Migrations is a novel of the crimes we inflict on nature, but again, such killings are not the point. Rather, McConaghy uses them to set the stage for the crimes we visit on ourselves and other humans.

At points, Franny has been abandoned and betrayed by her mother, father, and grandmother. Each of these characters carries a secret and commits an act that isolates them from Franny and the larger community. In a sense, Franny’s entire family has migrated apart, causing extinction on a basic level. Franny continues that tradition, taking advantage of her husband’s patience by isolating herself, remaining aloof and distant, and ultimately disappearing when he needs her most.

Franny also commits crimes, intentional or not, against unwitting strangers. One significant catastrophe, hinted at throughout the novel but only revealed toward the end, launches her on her final quest. One could argue about the amount of guilt she should bear over the incident; nevertheless, she chooses to bear it — not fearing punishment, but welcoming it. Franny suffers so that she can feel something, including the feeling of her sins being purged. But does she learn?

She drags the crew out to a dangerous sea and a potentially tragic end to fulfill her own destiny. It’s worth noting that the crew goes willingly — they, too, are fleeing their pasts and avoiding the inevitable future. Captain Ennis’ flight from his ailing wife and his children (whom he doesn’t feel he could serve well by being present) represents everyone else’s. This spirit of abandonment draws Franny and Ennis together.

McConaghy is a beautiful storyteller, evoking a sense of loss and longing for a natural world long depleted. Even in that emptiness, she portrays a sense of lushness, leaving us heartbroken with recognition that we are the ones to have caused such destruction.

Migrations does require some patience, as the story jumps back and forth both in time and location. But these twists are central to the plot; the author uses them to uncover facts, as if she were dusting off a coat of snow that shields a vital truth.

Taken as a whole, Migrations is a wonderful novel and worthwhile journey. The reader will enjoy it not just for its depictions of nature, but for the range of emotions McConaghy evokes. She forces us to look upon our sins large and small and see what consequences we all must bear.

This story boasts lovely writing, but is it too meta for its own good?